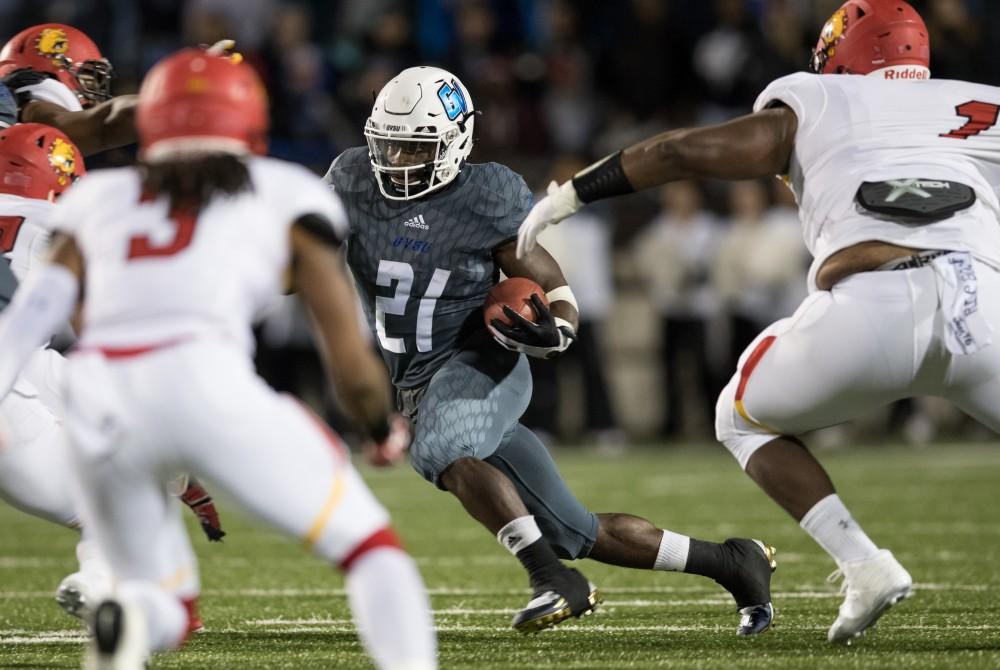 GVL/Kevin Sielaff - Marty Carter (21) races up through the pocket and looks to gain yardage. The Lakers defeat the Bulldogs of Ferris State University Saturday, Oct. 8, 2016 with a final score of 35-23 in Allendale.

And then there are rivalries that stem from two teams simply being among the best in their sport over the past number of decades. One of those rivalries will be renewed this weekend when the No. 7-ranked Grand Valley State Lakers (6-1, 5-0 GLIAC) travel to Big Rapids, Michigan, to take on the No. 12 Ferris State Bulldogs (5-1, 4-1 GLIAC) Saturday, Sept. 21.

The third and final game of the Lakers’ longest road trip of the year sees two of the top teams in the conference and country coming into the contest with hot winning streaks: GVSU has won six straight games, and FSU has won three.

This meeting carries extra drama going into kickoff as their last matchup ended with the Bulldogs knocking the Lakers out of the playoffs last season in Allendale. The Lakers are not letting themselves be blinded by a desire for revenge, though, and they plan on approaching their next matchup like any other.

“I think we’re just trying to attack this just like any other game,” said quarterback and team captain Bart Williams. “They’re a good squad, probably one of the more talented squads we’ll see all year. If we try to look at it as revenge for what happened last year, we’ll lose sight of the task at hand. I think we just need to get everybody bought in for this game like any other game, same attack as last week.”

Williams faces a tall order against a Bulldog defense that is rich with experience and toughness as they have conceded an average of 180.2 passing yards per game this season to coincide with their 104.8 allowed-rushing-yards average.

“Excellent defense, really an elite defense,” said head coach Matt Mitchell. “They have a lot of seniors on defense, all three levels of their defense. I think all four guys in their secondary are seniors. All three of their linebackers are seniors. They have a lot of experience at all three levels. They’re really dominant, big, physical, (and they) tackle extremely well. (They) have not given up a whole lot on the ground at all because of the size of their people and their scheme.

“We’re going to see a big jump in pass rush from a talent standpoint this Saturday. That is going to be a challenge for our offensive line.”

While FSU is lauded for its talented defense, the team presents a slew of challenges elsewhere, too. Their offense averages 35.7 points per game and 457.6 yards per game, split perfectly between their ground and air attacks. These numbers come despite their starting quarterback and preseason All-American Reggie Bell missing the last four games with an injury.

Sophomore quarterback Travis Russell has filled in suitably, having completed 66 of 127 attempts with four touchdowns but also five interceptions. His top target, wide receiver Malik Taylor, is set to be a problem unlike any other the Laker secondary has dealt with so far this season.

“I think last year in the playoff game was kind of an illustration of what he can do,” Mitchell said. “We were concerned about some of the deep balls on the sideline, the fade route, and he caught some balls on routes underneath, and we had trouble tackling him at the corner position on balls underneath us.

“When you have a receiver that’s fast enough to beat you over the top but can also run a hitch or sit on a stop route or comeback and catch it and advance it, those are scary guys and virtually impossible to double a guy given the scheme with a running quarterback and a plus-one run game. At some point on Saturday you have to consistently win these matchups.”

Bulldogs running backs Jahaan Brown and Jevon Shaw will be featured in the offense as well. The two have combined for 483 yards and five touchdowns on 91 carries so far this season.

Stopping the ground game will be a main focus for the Lakers in this matchup since opponents have had relative success running the ball on GVSU’s defense in 2017, including in week one where University of Indianapolis, now ranked one spot ahead of the Lakers in the AFCA Coaches’ Poll, jammed 326 yards down GVSU’s throat on the ground.

Unfortunately for the Bulldogs, they will not be facing the same unit the Greyhounds did.

“Coming from game one, where we got ripped a little bit in the run, we had some things to improve on, and we knew that,” said linebacker Collin Schlosser. “It just seems like every week we’re getting stronger at every position: defensive line, linebackers, defensive backs. It’s encouraging to see the things we see on tape, to be able to make those corrections each week. … We’ve improved a lot as a defense every single week.”

Overall, the top matchup to watch will be GVSU’s offense against FSU’s defense.

Will Williams, who has accumulated 1,515 yards and 18 touchdowns with only one interception in 2017, be allowed to find his preferred targets in Brandon Bean, Nick Keizer, Urston Smith and Nick Dodson, or will he be taken out of his comfort zone and forced to make adjustments on the fly?

Will running back Marty Carter, who has 781 yards and eight touchdowns on 8.7 yards per carry, have open lanes to slash through and force missed tackles, or will the Bulldogs take away the run, one of GVSU’s greatest weapons, and create a predictable flow to the Lakers’ offense?

These questions will be answered as the rivalry is renewed Saturday, Oct. 21, at Top Taggart Field in Big Rapids, Michigan. Kickoff is scheduled for 1 p.m. and can be streamed live on ESPN3.com and heard on ESPN radio 96.1.

Additionally, GVSU is hosting a watch party at Lubbers Stadium where students are welcome to watch the game on the largest video board in Division II. Gates open at noon, and the first 1,000 fans will receive a free tote bag.