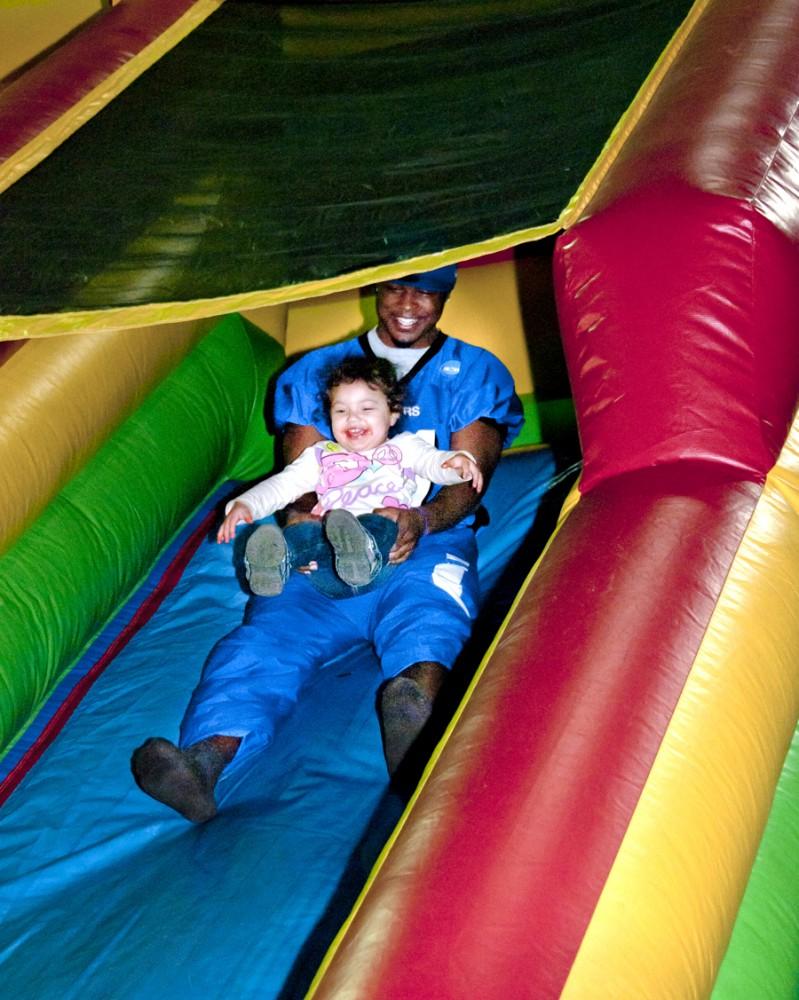 A Grand Valley football player has fun with a child during Friday's Relay for Life event.

Most of Friday evening into Saturday morning, the Fieldhouse Arena had a celebratory atmosphere. Children and college students bounced down inflated slides in one corner of the indoor track and purchased coffee drinks and ice cream in another.

But at several points throughout the night, the main stage brought the focus back to the reason everyone had gathered for the 12-hour marathon event: cancer.

The 2011 Relay for Life, hosted by Colleges Against Cancer, was held in the Fieldhouse Arena. The event kicked off at 6 p.m. and lasted until 6 a.m., and proceeds from the event will go to the American Cancer Society.

When the night was over, a final tally showed that the event managed to raise $96,887.

Many of the events that took place throughout the night tied into the theme, “Saving the World, One Relay At A Time!” Some took a lap dressed as their favorite superheroes, and later on the main stage, members from some teams took part in Name That Superhero, a quiz that tested participants’ knowledge of the heroes of popular culture.

Throughout the celebrations, small signs reminded the participants about the reason they came together. Between the rows of chairs lay a clump of hair. People dressed in purple “Celebrate, Remember, Fight Back” t-shirts to indicate their status as survivors of cancer.

The traditional Luminaria Ceremony, in which people lit candles inside of white paper bags that were available for less than $1, halted the people walking around the track and drew their attention to the main stage.

“Our track is illuminated by Luminaria. Each one represents a treasured relationship. They represent people, each with a name and a story to tell,” Thorp said. “As these Luminaria glow through the night, they represent a shared vision for a cancer-free future, a future where no one would ever again hear the words, ‘You have cancer.’”

The Luminaria had with the names of loved ones who have been affected by cancer. During the ceremony, names scrolled on a big screen and participants walked a lap in around the track in their honor.

Colleges Against Cancer also organized a ceremony to recognize the people who provide assistance to those with cancer.

“A caregiver can be anyone who provides support for a patient during their cancer journey,” said Patricia Devine, service and survivorship committee chair for Colleges Against Cancer. “It can be a friend providing a meal, a nurse who provides care to a patient while they are receiving treatment, a child sharing a picture they’ve drawn or a coworker who just takes time to call and ask how things are going.”

Karen Webber-Swanson spoke during the Caregiver Ceremony about how caregivers influenced her cancer trial. In December 2009, when Webber-Swanson went for a routine breast exam, the expressions on her doctors’ faces told her something was wrong. She lost her job half a year later, and in July 2010, she got married.

On August 21, 2010, after she sought a second opinion, the doctor told her she had cancer.

“From there it was a whirlwind of tests, figuring out who and where I wanted to get my treatment from – chemo … not being able to taste food, losing my hair and feeling like I was losing myself,” she said.

Webber-Swanson said her caregivers – her team of doctors and nurses – helped her bear the struggle with cancer.

“I had originally been referred to a surgeon who I felt treated me like a specimen,” she said.

After leaving a doctor’s visit feeling confused, she researched for other potential doctors.

“She, her P.A. and nurse wrote everything down for me,” she said. “They made sure I understood anything I had questioned. She also put together a crack team of doctors to handle the rest of my treatments.”

She said aside from the medical staff working on her case, the most influential caregiver has been her husband.

“At first I didn’t know how much care I was going to need, and I honestly didn’t want to ask for help,” she said. “I kept telling my husband that emotionally I felt like a big baby and that what my body was feeling was not me.”

She said he helped her to realize her pain was legitimate, and her doctors were available to help her endure.

When her arm turned purple, Webber-Swanson’s husband drove her to the Grand Rapids emergency room, not the local hospital. Her port had caused clots in four veins. She was hospitalized and required to take blood thinners upon her release.

Her husband gave her the mandatory injections in the stomach.

Webber-Swanson said, however, the most important caregiver has to be yourself.

“When it comes to how you feel about yourself, your husband may say you look beautiful, but you need to believe it, which is hard when you feel like an alien,” she said. “Cancer is tough, but dealing with it is tougher. So get that wig, draw on those eyebrows and drag your husband to six different stores until you find that perfect hat.”

The American Cancer Society will still accept Relay for Life donations at their local office, located at 129 Jefferson Ave. SE in Grand Rapids.