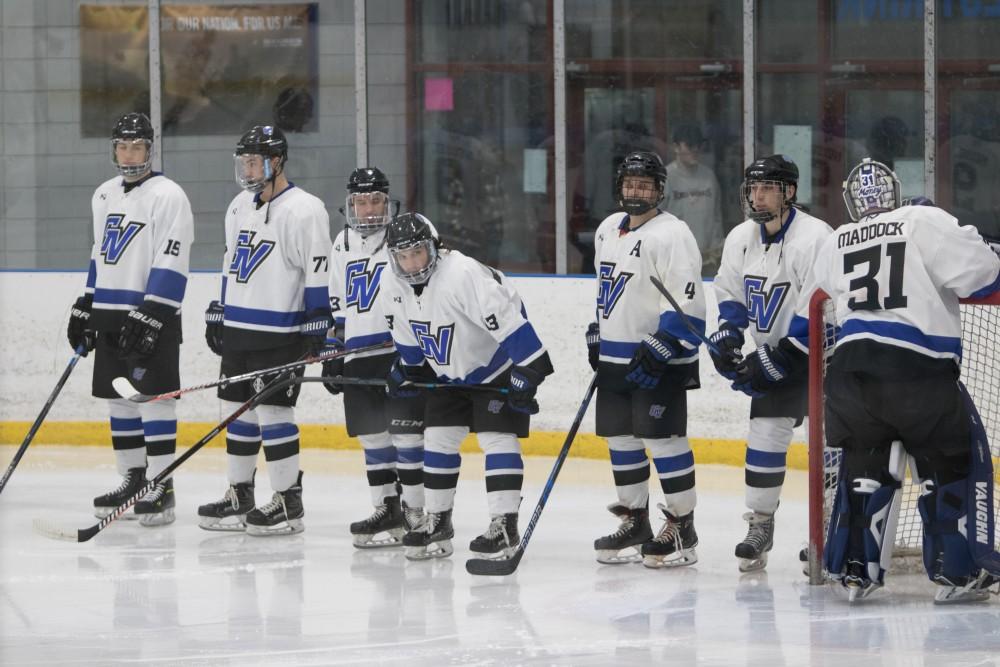 Once warm ups concluded and the final buzzer sounded, GVSU had come away with a 6-1 victory over local rival Michigan State, claiming the ACHA DII National Championship. This was the first of many national championships that the newly hired graduate assistant for club sports would experience.

Enter Eric Garvelink, or ‘Garv’ as nicknamed by his peers and club sport athletes, who began working at GVSU in 2010 as a graduate assistant in the Department of Campus Recreation.

“One of the things I first noticed was that there wasn’t a consistent identity,” Garvelink said. “Teams weren’t using the same font, logos and often viewed themselves as their own entity, rather than as a piece of a larger program.”

Shortly after Garvelink completed his position of graduate assistant, club sports teams and the student senate at GVSU lobbied to use the GVSU athletics logo, and in 2012 were officially approved to do so.

“One of the policies was that teams had to use the word ‘club’,” Garvelink said. “Our programs really didn’t care. They just wanted to be able to represent the institution at the highest levels of their collegiate club sport.”

On top of the addition of the GVSU athletic logo, Garvelink cited the cohesive nature and buy-in from club sports athletes and administration that allowed for so much growth in his first three years working at GVSU.

“For the first time, the club sports program had a full-time staff member to oversee them and support them as a whole,” Garvelink said. “With the success of many of our programs on a national level, I was able to help club teams realize that when one of our teams have success, it makes all of our teams and entire program look better. This created a sense of pride and support as a part of something bigger and that is the entire club sports program.”

Garvelink, who was hired as a program coordinator after his stint as a graduate assistant and was eventually promoted to associate director of Campus Recreation, said it was a no-brainer what his favorite part of the job was at GVSU.

Director of Campus Recreation Kate Harmon said Garvelink had many characteristics that allowed him to be successful while at GVSU.

“Eric has many great qualities that I appreciated as his supervisor,” said Harmon, who began working as his supervisor in 2015 after his promotion to associate director of Campus Recreation. “His ability to connect with students and our coaches was beneficial in furthering the mission of the program. Eric is a Laker for a Lifetime and that was evident in his daily approach and care for our students.”

By the end of Garvelink’s tenure at GVSU in 2018, not only had GVSU club sports developed a program identity, but the program had also grown from 48 club sports teams to 56 at its peak; placing it in the top one percent for program size in the country according to NIRSA.

When prompted what advice he would give to his successor, Garvelink emphasized that communication is a key part of the role.

“You have to be able to communicate effectively with people of all parties,” Garvelink said, who would have to coordinate projects while communicating with campus recreation employees, students, university administration, sponsors, parents and coaches. “With all those parties and people involved, you definitely have to have someone who can manage and communicate effectively with all the different people they will be in touch with,”

Moving forward, Garvelink will fill the role of program director of competitive sports at the University of California, Los Angeles where he will be in charge of several different programs. These programs include the club and intramural sports programs as well as the UCLA Martial Arts Program and the Adaptive Recreation Program.

On his last day in Allendale, GVSU Club Sports tweeted a heartfelt thank you to Garvelink over social media for all the work he had done for club sports.

As for Garvelink’s position at GVSU, it will remain vacant for the foreseeable future until GVSU administration completes its hiring process to find a replacement.

“The position is currently posted on the GVSU Jobs website,” Harmon said. “We are accepting applications and will review them soon with the hope to identify his replacement by spring break.”