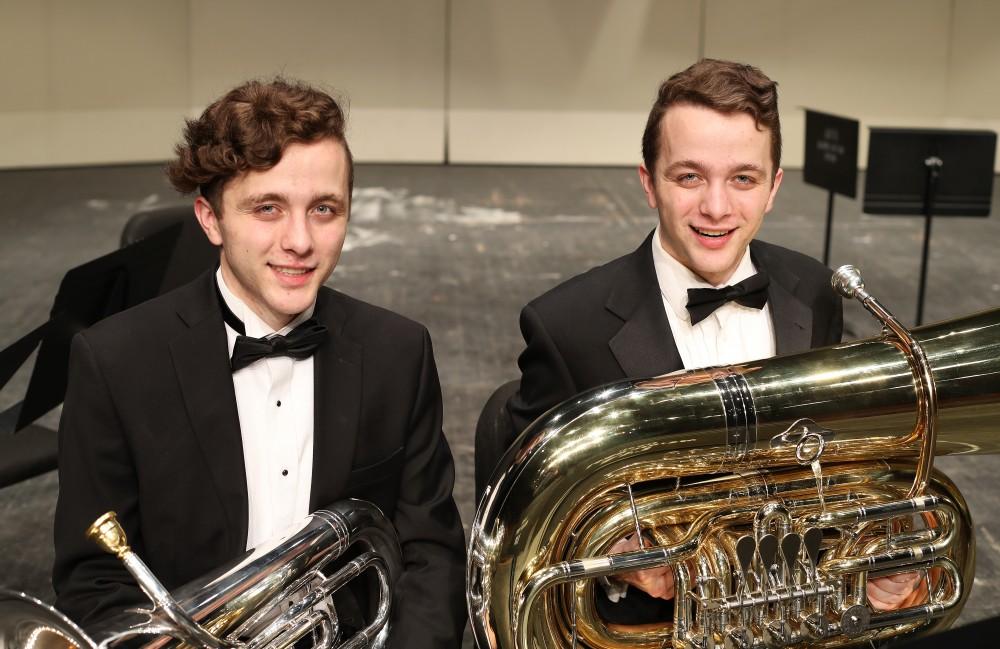 GVL/Kevin Sielaff - Nikolaus (left) and Lukas (right) Schroeder pose for a photo on the stage of the Louis Armstrong Auditorium on Friday, April 14, 2017.

Listening to music is a largely passive activity. It’s fun to listen to songs on the radio on the commute to class or while studying, doing homework or partying with friends, but the average person doesn’t usually analyze music in depth. Most people don’t transcribe the notes they hear on a sheet of paper as they’re listening to them or sit down and appreciate the tone and rhyme scheme the composer chose or examine the role each instrument contributes to the piece as a whole. Instead, most people just listen to music because they like the way it sounds.

Maybe that’s because many people are not music majors.

Nikolaus Schroeder, a GVSU senior, was one of two winners of the Glenn A. Niemeyer Award for “outstanding contribution to the community” during the Student Awards Convocation Monday, April 10. He is a composer, musician, former president of the GVSU Varsity Men’s Glee Club, member of “The Lake Effects” band, music major and possibly the most well-known student composer in the department of music and dance.

When Schroeder listens to music, he takes notes, he listens for the various instruments and he examines what makes the music good and attractive. Then, he writes his own.

“It’s just pure imagination,” Schroeder said. “When you play an instrument, there are rules on what you do, but when you compose, that’s all gone.”

He said his process of composing music is both technical and emotional. He first decides on the ensemble, or the group of musicians he’ll be composing for. Next, he looks for inspiration. He said he has gone out into the woods with an audio recorder, into the GVSU ravines or up north in Michigan to get some inspiration from the sounds of nature. He will be given assignments to write music where the scale, the feel and the time signature are already predetermined, but other times, such as when he is writing music for his rock band, all the music comes from his head.

“There’s this intellectual aspect to organizing the music and making it work well on the instruments,” Schroeder said. “I think that a misconception people have is that you sit in a room and improvise music and you write it down and then it’s a piece.”

The last thing Schroeder said he does is have conversations with the musicians about how the music sounds. Most times, they will give him feedback as to which parts they like and which parts they don’t. He said creating music involves a lot of collaboration.

Currently, Schroeder writes music for ensembles consisting of anywhere between two to 10 musicians. Schroeder said he can play the euphonium, the trombone, guitar, piano and more. Yet sometimes, he said, he will compose for instruments he doesn’t even know how to play. In that scenario, he said, he would have to read books and talk to players to get a full scope of how the music would sound. He said he has dedicated himself to trying to imagine the way the instruments will sound, something he said has taken a lot of work to master.

Schroeder said he works very hard on each piece he creates. Often, he is collaborating with his mentor, music professor Bill Ryan. He said he visits Ryan in his office to talk about his music and how to improve as a composer. Ryan, an award-winning composer, conductor and producer of music, said he recognized the talent of Schroeder early on.

“Right away when I started working with him, he was always a hard worker,” Ryan said. “I’m rooting for him whatever he decides to do.”

Schroeder’s twin brother, Lukas Schroeder, is an award-winning musician as well. The two share membership in “The Lake Effects” band and also a passion for music from a young age. The twins said they collaborate with each other on a daily basis. They play music together, they critique each other, they get worked up at each other and they admire one another.

“He is one of the hardest working people I know, period,” Lukas Schroeder said. “People just don’t work as hard as he does. It’s exciting to watch; he’s always doing something new.”

Nikolaus Schroeder praised his mentors and the music program at GVSU for fostering his growth.

“My gratitude for what this program at GVSU has offered is nearly inexpressible,” he said. “The community here is really exceptional, and that’s what made it possible to be where I am, and it’s important to recognize that privilege of having that support.”

Nikolaus Schroeder said he would be moving onto graduate school to study music composition further after he graduates. “The Lake Effects” has a website which hosts all of its music and merchandise, and a website for Nikolaus Schroeder himself also exists.