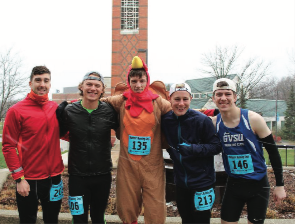 November brings forth the season of giving, and at Grand Valley State University there is no shortage of opportunities to give back to the community. This past Saturday, Nov. 17, the GVSU Running Club did just that at their 10th annual Turkey Trot.

The GVSU Running Club is an organization for all students who have any interest in running. The group meets every day from Monday through Friday at 6 p.m. at the Kelly Sports Center. Students of all abilities are welcome, and members’ running experience spans from never running a step in their life to ultra-marathoners and everything in between.

Sylvia Knight, a member of GVSU’s Running Club, said that she loves the community that the running club fosters. She said it gives a place for people who want to just run or jog and have fun. It gives people a chance to mingle and get to know each other.

At 9 a.m., people began to gather around the Allendale campus’ Cook-Carillon Tower to begin their 5K race around campus.

Knight said this is her fourth year running the race and she loves coming out and supporting it because she knows she is doing it for a good cause.

The GVSU Running Club holds this event every year to raise money for Kids’ Food Basket, a non-profit organization that gives meals to children in need in the Grand Rapids area.

Kara Cotter, E-board member for the Running Club and race director, said that Kids’ Food Basket goes into different schools and gives children nutritious meals to take home so that lunch is not their last meal of the day.

“This is really important for our club to connect with the community as much as possible,” Cotter said. “We want to be involved also in the greater Grand Rapids community, so being able to support such an incredible local organization is really great for us.”

Cotter said they had a goal to raise $4,000 for the organization, but they received way more than that goal.

“What I love about the Turkey Trot is just the sense of giving that is there,” Cotter said. “All of the proceeds go toward (Kids’ Food Basket); we don’t make any money off of it, so it’s really just a labor of love.”

At the end of the race, they brought everyone together for a small award ceremony where some were recognized from the race.

The president of the running club was a fan favorite, as he ran the whole race dressed in a turkey costume.

Knight said that the Turkey Trot is a great way to get GVSU’s college community together a week before Thanksgiving.