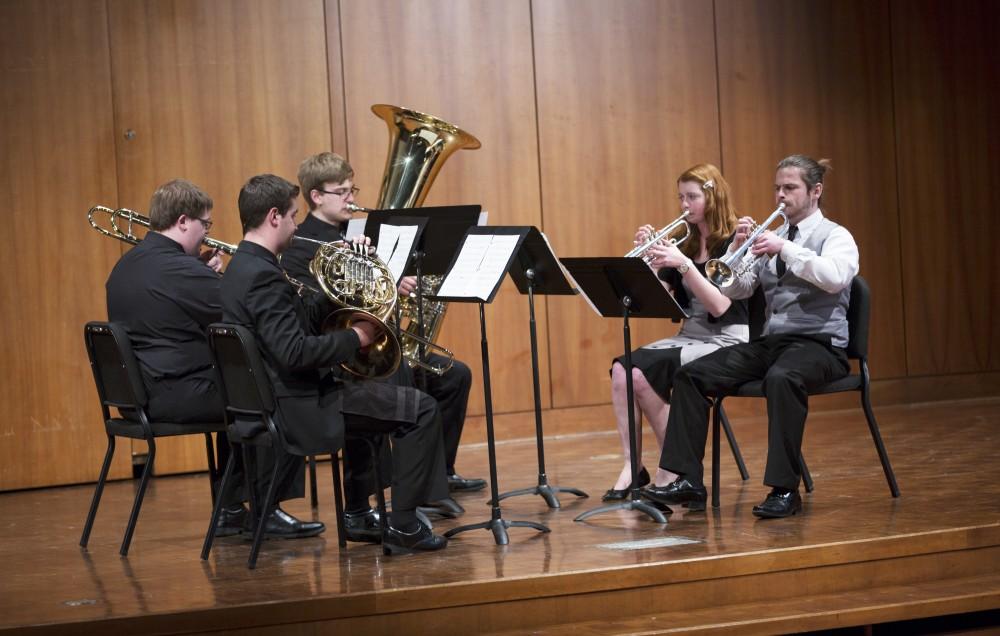 Honoring Alex Aninos’ legacy, students, faculty, staff and community members all gathered together to hold the Alex Aninos Memorial Scholarship Concert on March 25. A music education major, a saxophonist and an active member of the community, Aninos left a lasting impact on those who knew him, and those who knew him hope to remember him through the formation of an annual scholarship.

Aninos was killed in a car accident in 2014 and since then, music students and faculty members have been working to create a scholarship in his name. For the people involved, the concert and the scholarship are representative of Aninos’ memory.

“Alex was one of those music students that was just really excited to be involved in every single part of the music program and he certainly reached out and touched a lot of students’ lives,” said music education professor Beth Gibbs. “I think it’s very clear with all of the participation from the student groups (at this concert) that he’s somebody who was really connected with people and who certainly motivated people to be better.”

To help represent Aninos, the GVSU chapter of the National Association for Music Education (NAfME) worked with Gibbs and saxophone professor Dan Graser to create an annual scholarship of $1500 for music students who have shown a “turn around” in their career. Wanting the scholarship to be based on Aninos’ time at GVSU, the faculty and students involved chose to highlight the fact that while Aninos had initially struggled at GVSU, he was eventually able to turn that around.

“Alex, as a few students do, started having doubts about his degree,” Graser said. “He and I had a lot of talks about this and he realized very quickly that he could be an absolutely wonderful musician, but that so far his work ethic was letting him down. He became more enthusiastic about teaching. He became a regular presence in the practice hallway because he was practicing more. When he was there, he was helping out his colleagues.

“I think he went from not enjoying the routine of being a music education major, to realizing that he really was enjoying music and was really looking forward to being a music teacher. Because of that realization, his grades got better, his saxophone abilities got better and generally his attitude became the ideal working attitude.”

Devin Clark, a senior horn player at GVSU who performed at the scholarship concert, was one student Aninos had reached out to. He said Aninos became his friend and mentor after they met in the practice hallway.

“When I was a freshman here, I was panicked, looking for a practice room and Alex came out and spotted me and said I could use his, he was done for the night anyway,” Clark said. “He brought me into his practice room and asked me where I was from and was genuinely interested in what I said.

“He made you feel free and like you could do anything.”

Graser said the Alex Aninos Scholarship will differ from typical merit scholarships that are awarded to students applying to GVSU. He said the scholarship will help to reward the type of “turn around” that Aninos experienced.

“Nobody is perfect. Nobody comes in (to the music program) and instantly everything clicks,” Graser said. “There should be some way to reward people who really make a concerted effort, who really work at improving themselves. You want to award achievement at every level, and sometimes students come in with a high level of achievement, or sometimes after a year, or two or three they start achieving really great things. I think this is a nice way to reward that.”

The memorial concert was planned by NAfME, Graser and Gibbs to raise money for the scholarship. They have also been raising money through word of mouth, direct donations from faculty paychecks, and a link online where anyone can donate.

President of NAfME Angela Schmitt said they decided to hold a concert because it was the best way to help so many students be involved and for music students to express themselves.

“Obviously music is a way that we communicate that we all understand a lot more than words. We’re musicians, so that’s what we know how to do,” Schmitt said. “We thought that was best that we could convey a lot more emotionally, and it offers a lot more opportunity for other students to play a role in this without having to talk a lot about it, because they don’t know him or they don’t want to speak because it takes an emotional toll.”

Graser said students chose to perform pieces that they felt were representative of remembering someone.

One student who performed at the concert was senior saxophone player and education major, Karsten Wimbush. Wimbush performed in a saxophone quartet with Aninos and was a friend of his. For him, performing in the concert was a good way to remember Aninos.

“It’s been a release, more than anything,” Wimbush said. “A time to actually express what words cannot. I wish (Aninos) was still here of course, but it’s obvious to just see the huge impact that he had on everyone around him.

“He had this way of just making everyone feel welcome. I think this recital is very much a gathering of everyone, especially within the music department.”

Since Aninos’ death, Wimbush has been composing a piece which he performed at the concert entitled “In Dreams and Memories.”

“(‘In Dreams and Memories’) is a reflection of the impact that Alex had,” Wimbush said. “My hope is that it has an overall sense of peace, despite some of the pain in the middle of it. The journey that I had with him personally was definitely the inspiration behind it. He was just the type of person that you could always open up to and I thank God for the time that I had with him and the journey that he went on.”

“His legacy is very much a representation of the potential of the human spirit,” Wimbush said. “I’ll be quite honest, Alex wasn’t extraordinary in his gifts or talents or natural abilities, he was extraordinary in his drive to constantly not only better himself, but better the people around him. He sacrificed for his students, for his friends, for his teachers. It’s not as important how you start, it’s more important how you finish. That’s just something that he embodied so well.”

To donate to the Alex Aninos Scholarship fund, visit www.gvsu.edu/giving/give-online2.htm?fundid=29247.