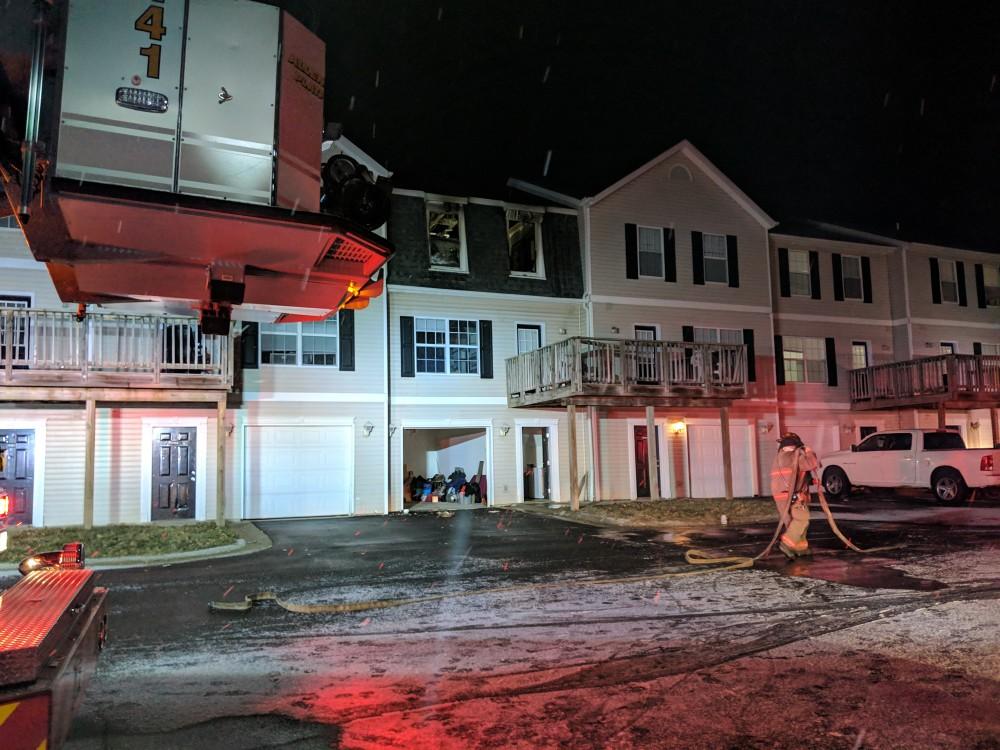 Fire departments from Allendale, Georgetown and Blendon townships responded to an apartment unit on fire shortly after 6:30 p.m. on Thursday, Jan 17 in GVSU off-campus apartment Copper Beech Townhomes. The team arrived to flames coming from the third floor of a middle housing unit before putting out the flames within 30 minutes, according to witnesses.

Fire Lt. Scott Harkef said that the fire was quickly contained, only damaging one unit. No serious injuries were reported, but residents of the complex were kept outside for nearly two hours while the scene was cleared.

“Residents were home at the time of the fire,” Harkef said. “They were alerted by smoke detectors. They tried to extinguish it themselves, but once they realized it was too big, they got out and started alerting tenants of the building next door.”

Harkef said the cause of the fire seemed to be a small propane torch used to light candles. The resident failed to turn off the flame before it caught the room on fire.

An investigation is still pending, which aims to be completed within a week. Harkef said that while the department still needs to conduct an investigation, he is confident that the situation was accidental.

Ryan Hein, a building resident, said that he wasn’t aware of the fire until other residents alerted him and his roommates — a trend that other displaced residents attested to.

“I heard this loud shattering noise and I didn’t really think anything of it – I thought something fell and broke,” Hein said. “My girlfriend called me because her and her roommate saw the smoke and said to come outside. So, I came out and (the) room was engulfed in flames. It was kind of crazy.”

Teague Suitor, another building resident, said that had it not been for residents from living center across the street, they wouldn’t have known about the flames. Suitor rushed outside with her cats and saw the flames.

“We didn’t even know the alarm went off until another girl from Trio across the street knocked on our door and said we need to get out and our house was on fire,” Suitor said. “Thank goodness for her.”

Hein, who spoke with the resident who owned the damaged unit, said that the torch set his curtains on fire with flames spreading to his bed and floor. He attempted to put out the fire by dousing items in his bathtub, but called the fire department once he realized it was out of control.

Residents were allowed back in their units by 7:50 p.m., with firefighters gathering displaced students waiting outside and police allowing traffic to flow through Pierce Street.

Harkef said that the damaged unit would then be locked for the night, with other firefighters saying that next steps for recovery will be insurance claims for Copper Beech and the residents, if applicable.

As of Sunday, Jan. 20, Copper Beech residents had not received an email or phone call in regards to the events that transpired on Thursday. Copper Beech was not available for comment over the weekend.

This was the first fire in Allendale Township of the new year according to Allendale Police Department.