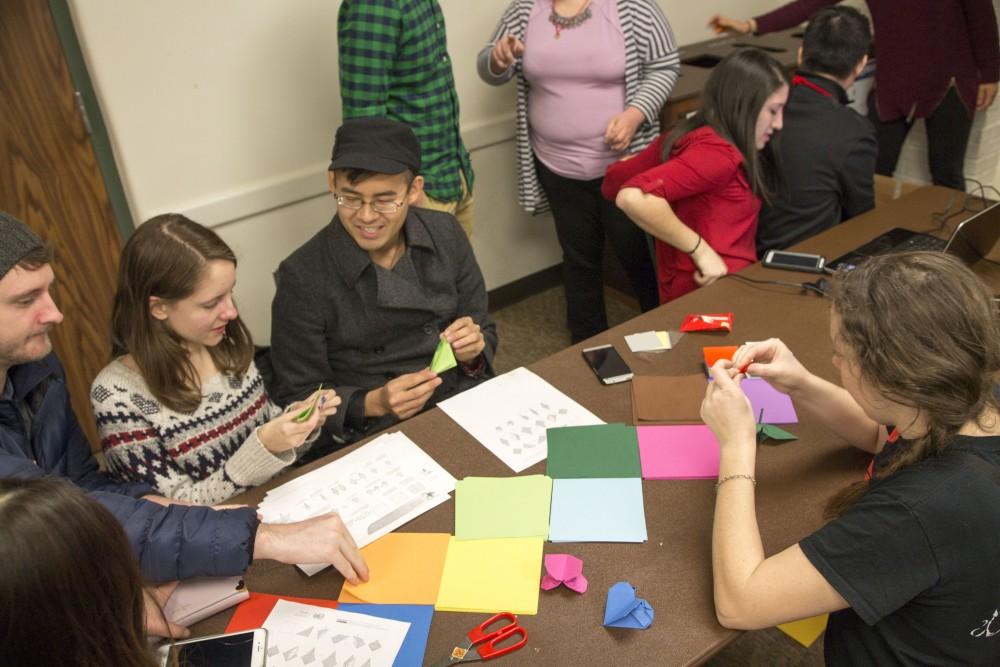 GVL / Sara Carte Grand Valley State University students make origami during the celebration of the Asian New Year Festival 2016, sponsored by the Asian Student Union and the Office of Multicultural Affaris, in the Kirkhof Center on Thursday, Feb. 4, 2016.

Grand Valley State University’s Asian New Year Festival will be celebrated Saturday, Feb. 10, from 6 p.m. to 9 p.m. in the Kirkhof Center Grand River Room. The festival will be hosted by the Asian Student Union in order to showcase the traditions of the New Year celebration from various Asian cultures.

At the event, which will be open to the public, students can expect many performances, including from special guest A.J. Rafael. Rafael is a popular YouTube singer who has more than 700,000 subscribers. Aside from the shows, there will also be Asian food and decorations lining the halls of the Kirkhof Center.

The Lunar New Year will take place Friday, Feb. 16, and will be welcoming the year of the dog and leaving behind the year of the rooster, according to Asian astrology. Because this calendar is based off the Chinese lunisolar calendar, the date is not fixed, changing every year.

“It’s an event hosted at GVSU annually based off the lunar calendar,” said Casey Nguyen, activity coordinator for the ASU. “This festival is usually an accumulation of different celebrations from all countries over Asia, and since this year the lunar calendar marks the year of the dog, that’s what we’re going to base our celebration on.”

Traditionally, the Lunar New Year was a celebration to honor deities as well as ancestors.

“It’s important for people to see how Asian countries celebrate the New Year and engage in their traditions and celebrations,” Nguyen said. “As an Asian-American, I feel students need to understand how big the Asian community really is in Grand Rapids, and even Michigan as a whole.

“It’s also important for us to promote cultural diversity because many people in the States have only lived in one culture which they’re used to. When they’re exposed to other cultures, they will be able to understand the reasoning behind other culture traditions and celebrations.”

Aside from the Asian New Year Festival, there will be other activities held in order to promote Asian culture on campus. Jo Wei Yek, a sophomore exchange student from Malaysia, will be hosting a Malaysian-themed dinner to celebrate the Chinese New Year as well.

“Being brought up in an Asian environment taught me collectivism, which is essential in my culture, as opposed to the independence that’s so prevalent in the U.S.,” Yek said. “My country is all about being one unit and striving together. It’s about valuing teamwork and individual uniqueness that contributes to a whole group’s strength.”

Exposing people to new cultures and traditions, the ASU hosts these events in order to foster understanding and open-mindedness in the surrounding community.

“These events allow us to learn about diversity, which is the key to opening people’s minds to different possibilities and opportunities in the world,” Nguyen said. “In our lives, we come across different people from different cultures, and I think this is the best way to promote diversity, through these activities which will help us appreciate the uniqueness and values of other cultures.”