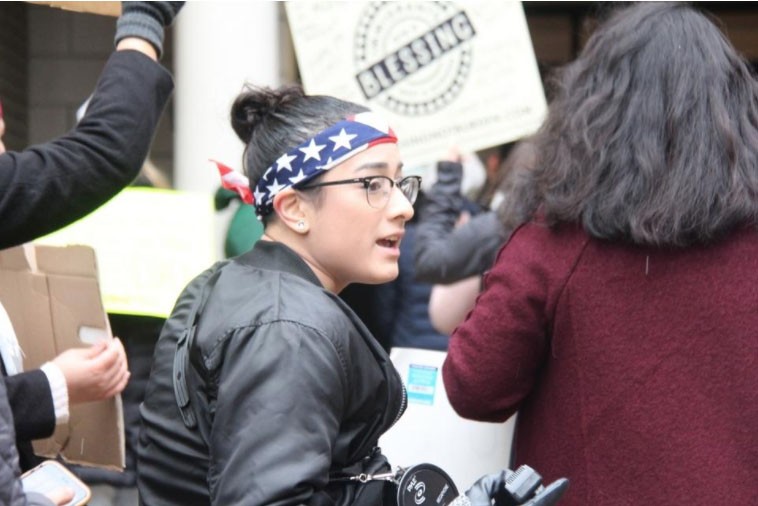 Chants of “Say it loud! Say it clear! Immigrants are welcome here!” filled the streets of downtown Holland, Michigan, Tuesday, Oct. 31, during a Deferred Action for Childhood Arrivals (DACA) march and rally planned by students at Hope College.

From 11 a.m. to 12:30 p.m., almost 300 local students and community members participated in the protest to support DACA recipients and to advocate for the implementation of a clean Dream Act and comprehensive immigration reform.

“We are marching because we feel it’s important to support both community members and students who have been affected by the DACA decision,” said Julia Fulton, a Hope College student involved in organizing the event. “We’re using our voices, our time and our energy to stand up for what we believe in and show support in the most visible way we can.”

At their final destination, the participants were greeted with snacks and speeches addressing the cause of the march. The speakers at City Hall included Nancy DeBoer, the mayor of Holland; Cady Short-Thompson, the provost of Hope College; Roberto Jara, the executive director of Latin Americans United for Progress; Gordon Wiersma, a co-pastor at Hope Church; and Alejandra Gómez Limón, a student at Hope College.

“What we really want out of it is not only to give people an outlet to take action but also to give people information from different viewpoints, which is why we have a variety of speakers,” said Gómez Limón, another student leader who coordinated the event.

Despite the cold, the atmosphere at the DACA community march was energized and positive. The protest was strictly non-violent, so hostile words and actions were not tolerated. Attendees were told to stick to the message and respect the privacy of other participants, especially those impacted by the DACA decision.

The DACA program has protected more than 700,000 undocumented immigrants who were brought to the U.S. as children. The DACA decision will impact many people, such as college and university students.

“My family had a smooth transition through moving from Mexico to England to the United States,” Gómez Limón said. “It seems unfair to me that someone else can’t have that as well. DACA, specifically, impacts people who didn’t even have a choice in immigrating. All of the opportunities taken from these students, when they are granted to others, like me, is really what drives my investment in this.”

Moving forward, Fulton and Gómez Limón said it is necessary for people to take action at a local level. They hope the DACA march and rally will be a starting point for change.

“People in this country have a way of polarizing and dividing and making our differences seem bigger than our similarities,” Fulton said. “We want to empower students to be the change in this country because that’s how things are going to improve.”

The purpose of this week is to provide a well-rounded perspective on issues surrounding DACA and immigration. For those who could not attend the event Tuesday, there will still be opportunities to get involved through panel discussions and other activities.

The Immigration Coalition Advocacy Week is co-sponsored by groups at Hope College, including Campus Ministries, Vox Populi, the Center for Diversity and Inclusion, the GROW Collaboration, the Latino Student Organization, Hope United for Justice, Hope College Democrats, and the “Immigrants Are a Blessing Not Burden” campaign.