GVSU women’s basketball eliminated in Round of 32 by undefeated Ashland, 77-62 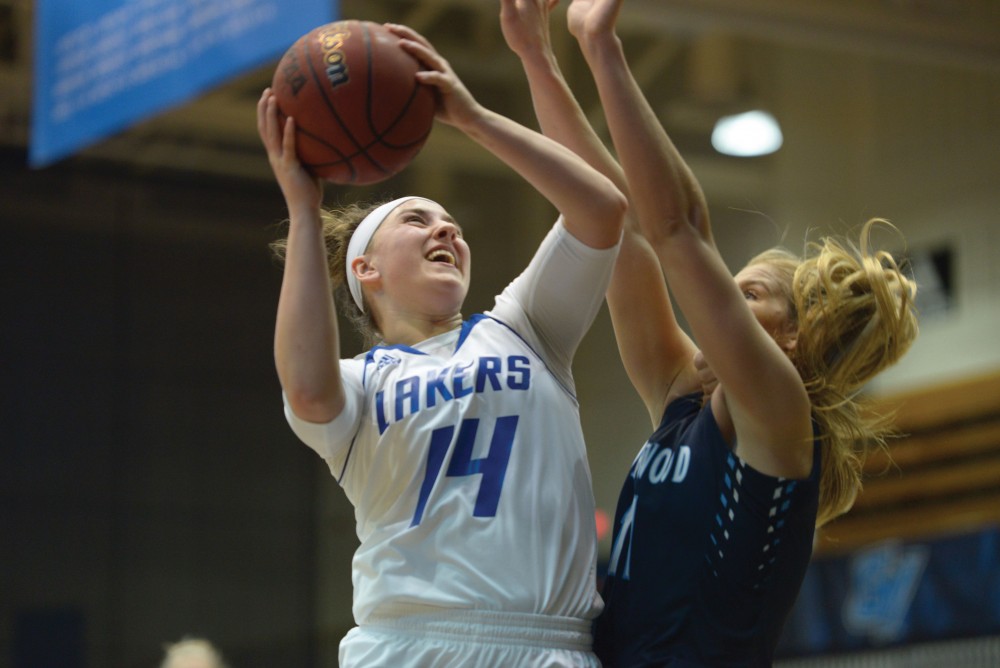 In a rematch of the GLIAC Tournament Finals, the Grand Valley State women’s basketball team lost to No. 1 Ashland 77-62 in the NCAA Midwest Regional Semifinals. The Eagles (33-0) completed the three-game season sweep of GVSU, eliminating the Lakers (24-8) from the postseason.

Prior to the NCAA Tournament, the Lakers beat Northwood 68-55 and Saginaw Valley State 71-58 to advance to the GLIAC Tournament Finals. In the Finals, the Lakers were again bested by Ashland, the only remaining undefeated team in Division II, 85-76.

In the NCAA Tournament, the fifth-seed Lakers won their first matchup against the fourth-seed Ursuline 73-66. The game was a battle of strengths with Ursuline possessing the ninth-ranked scoring offense (80.6 points per game) and GVSU with the top scoring defense in the nation, allowing only 53.3 points per game.

The Lakers boasted their top-ranked defense in the first half by taking a 34-23 lead before halftime.

In the second half, the Arrows cut into that lead and trailed by only four points heading into the fourth quarter.

“We made plays when we needed to,” said GVSU coach Mike Williams. “(Ursuline) would make a run, get close, and then we would get some stops, make some big plays and make some free throws.”

GVSU’s post players combined for 29 points in the game with 13 point coming from Taylor Parmley and 16 of those points coming off the bench. Freshman Cassidy Boensch tallied nine points while Korynn Hincka scored seven points.

“Our low-post presence is a big deal for us and it opens up the rest of the floor for shooters to shoot,” said senior Piper Tucker. “That’s what helped me throughout the game, the posts being able to distribute the ball.”

Tucker finished with a team-high 17 points complementing her five rebounds.

“She had an ‘I’m-going-to-get-it-done’ attitude,” Williams said. “She cleaned up the glass, made good decisions and she hunted shots.”

With the win, the Lakers solidified another date with Ashland, a team GVSU lost to by 14 and nine points this season in two contests.

“(The key is) going to be sustaining a consistent effort through 40 minutes and withstanding blows,” Williams said. “That’s going to have to be our mindset. Can we take that hit and keep coming back.”

The Lakers received the first blow in the opening minutes of the game as Ashland jumped out to a 10-point lead in the first three minutes. By the end of the first quarter, the Eagles lead the Lakers 27-18.

In the second quarter, the Lakers’ defense held the Eagles to only seven points. In the meantime, the offense chipped away at the lead and trailed by only a point at halftime.

With two seconds left in the half, GVSU’s Janae Langs drew a foul on a layup and hit both free throws. On the ensuing inbounds play, Langs intercepted the pass, stepped back and drained a 3-pointer that beat the buzzer.

“I just wanted to try to make something happen,” Langs said. “I read the in-bounder’s eyes and just jumped the pass.”

In the fourth quarter, the Eagles pulled away and sustained a double-digit lead late in the game. Langs finished with a team-high 16 points while gathering seven rebounds and dishing out six assists. Ashland had four players with 12 or more points including 21 points from Andi Daugherty.

The Eagles extended their undefeated season to 33 games and will play Drury in the NCAA Regional Finals Monday, March 13.

For the Lakers, the game marked the last time that the team’s seven seniors stepped out onto the floor in a GVSU uniform. They finished their careers with two NCAA Tournament appearances and a Final Four appearance last season.

“We talked about the whole body of work (of the senior class),” Williams said. “This year, outside of making a Final Four run, I thought we had a better year. I was fortunate enough to coach them the past two years. They are a high-character, quality group that found a way to be successful.”