GVSU room and board to increase 1.6 percent 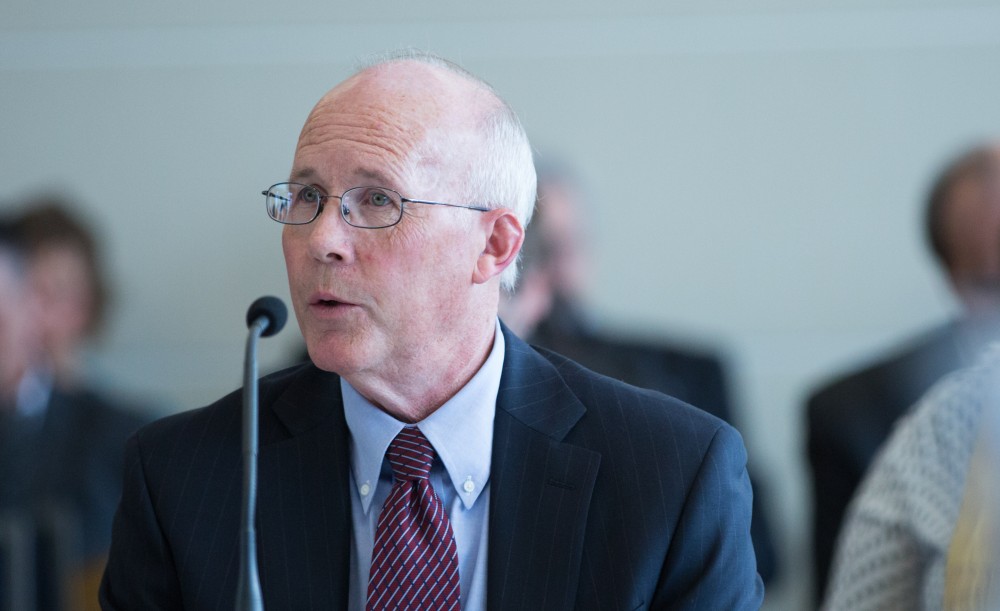 GVL / Kevin Sielaff - Brian Copeland, assistant treasurer, announces an increase to dining costs at the Board of Trustees meeting on Friday, Feb. 12, 2016 in the Seidman College of Business on Grand Valley's Pew Campus.

Grand Valley State University students living on campus next year should expect to pay approximately $82 more for room and board per semester.

This overall increase of 1.6 percent was approved by the GVSU Board of Trustees at its Feb. 12 meeting, held in the L. William Seidman Center. On average, this will mean an increase of $32 per semester per bed and $50 per semester for each of the three primary meal plans offered by campus dining.

In accordance with these increases, the housing and dining budget will increase from $51 million to $53.7 million for the 2017 fiscal year.

While students may not be pleased about the price hike, this year’s increase is less than the 2.8 percent increase Lakers experienced last year.

“This increase is lower than our five-year average of 2 percent and also the five-year state average, which is 3 percent,” said Brian Copeland, vice president for business and finance at GVSU.

According to Copeland, the five-year state average increase is $125 per semester for room and board, making the GVSU increase of $82 significantly lower than other colleges in Michigan.

“Any time we can keep room and board affordable with the quality up, we’re going to do that,” said Andy Beachnau, director of housing and residence life. “Keeping the rates affordable for students is a priority for us. We’re kind of challenging other schools to do what we’re doing, that’s the fun part.”

Though the average increase for housing is $32 per semester, some housing styles will see a larger jump in price. The highest increases will affect upperclassmen the most. Nearly all two-bedroom options on south campus will increase by $70 per semester, including rooms in Niemeyer, Murray, VanSteeland, South Apartments and Laker Village Apartments.

Traditional double and single rooms in Copeland, Kistler and Robinson will decrease in rate by $30 per semester.

Though a new housing building will open on north campus in the fall of 2016, those construction costs did not factor into the housing rate bump. Instead, the increase is mainly due to upkeep costs.

“One of the things that’s a challenge with the housing system is that we have to fix buildings,” Beachnau said. “We spend a lot of our money in the summer doing projects for maintenance: heating and cooling, flooring. When we do have an increase, we’re committed to reinvesting that into our system. It can mean replacing windows, safety upgrades, those kinds of things. We try to fix our buildings so they’re still great places to live.”

Beachnau also noted that the new housing building will hopefully decrease maintenance and energy costs in the future.

“Initially, it seems like you’re spending a little bit more money, but with the Ravines retiring, we think that’s a good switch,” Beachnau said. “We’re constantly being current.”

“I hope students are pleased that we’re thinking about them and keeping housing affordable,” Beachnau said.

For more information about room and board prices at GVSU, visit www.gvsu.edu/housing.