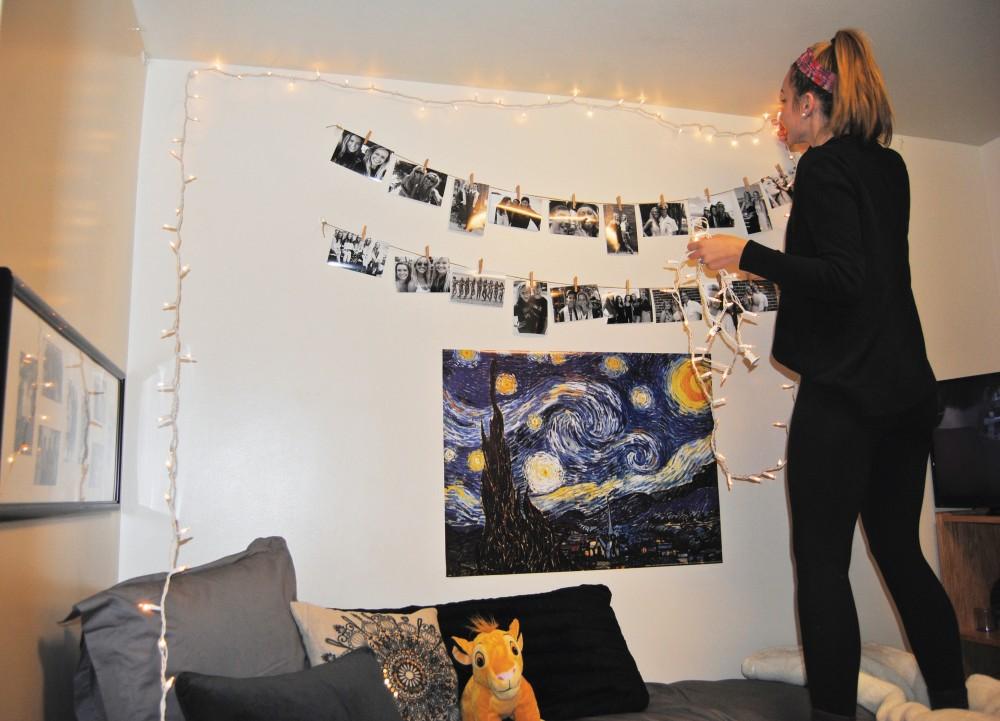 A total of 6,030 students are expected to be living on
campus at Grand Valley State University this fall, with approximately 3,550
first-year students making up more than half of that number.

Dena Willis, housing and residence life occupancy manager,
said there are many benefits to living on campus, especially as a freshman.

“The number one reason for students to live on campus is to
get involved, and it’s a great way to get to know other people,” Willis said. “I
also think there’s convenience to living on campus: You’re close to classes,
you’re close to food, you’re close to athletic events … All those things play a
role in what we call the ‘student experience.’”

“It’s a really nice step, especially for first-year students, to not totally move off campus, but you have kind of this buffer in which
students can live here with an extra net of safety,” Willis said.

GVSU’s housing department does work with the off-campus
apartments, which surround the university in Allendale. Willis said they try to
meet once a semester, but she keeps up a regular communication with them as
well.

“We are here for students, and we know that our off-campus
people house (students), and we want to make sure that our students have a
successful experience there,” Willis said. “One of the ways that we do that is to
collaborate with them and learn about their processes and how we can make
things better for our students, while also knowing that we’re in competition
with each other, and that’s okay because we want to find the right fit for
every student.”

Second-year students have the option to live in a campus
apartment, which Willis said is almost “unheard” of at other universities in
the state.

Other amenities for students living on campus are free
laundry, cable and Wi-Fi. Willis said the benefits reach far beyond that.

“When we talk about the student experience, I think the
biggest thing is we’re connected to the university, so we are a great resource,”
Willis said.

First-year students tend to face a certain amount of issues
as they transition into adulthood and living in a new environment. These issues
could be homesickness, not getting along with a roommate, or breaking the rules
and facing the consequences.

Many students begin to feel homesick as they start a new
life living on their own with other people in a new place. Some students live
hours away from their families and communities, and it can be an emotional time.
Willis advised students not to forget the GVSU staff around them.

“Reach out for help, especially with your RA,” Willis said. “Your RA is
there, and if you don’t feel like you connect with your RA, talk with your RA
because maybe they can find someone that you can connect with. Know
that the RA knows that, and the RA can get you connected to the right person.”

In addition, Willis said students should try something new because often homesickness can be associated with a fear of change or trying
new things.

“You have to take risks, and sometimes that’s difficult for students,”
Willis said. “Know that you’re not alone and there are plenty of other students
that feel the same way and that we are here as the residence life staff to help
and assist that student, whatever we can do.”

Living with people you just met can be scary, but also it
could mean a clash of personalities.

“We’re not naïve to think that roommate conflicts don’t happen,
because they do, and we just really ask students that they respect others and
respect others’ opinions, views and all those different types of things so that
they can get along and have a good experience here,” Willis said. “We’re not
asking people to become best friends, but we are asking people to really respect
each other and learn more about the world and about who they are as well.”

GVSU student Kayleigh Rehkopf lived in the Glenn A. Niemeyer Learning and
Living Center her freshman year. As a first-year college student and an
only child, she said she had a hard time adjusting to living with other people
her age.

“For me, that was definitely an adjustment because I was an
only child, so the only people I was used to living with were my parents, not
people who were my age and faced the same daily struggles I did,” Rehkopf said.
“On one hand, that was nice because we could all understand one another’s
troubles, but on the other hand, it’s still the fact of having two to four
18-year-olds living together.”

Rehkopf, who is now a senior majoring in biology for pre-medical studies, said she adjusted to the living situation by making time for herself away from her roommates.

“I adjusted by making sure I took time for myself and spent enough time doing the things I needed to do and liked to do,” Rehkopf said. “Living with them was great, but sometimes I just needed some ‘me time.'”

Additionally, Willis said the college is no stranger to
students breaking rules, like underage drinking in the halls.  She encouraged students to make responsible
decisions.

“We want students to make good choices and to make
responsible choices and to understand that sometimes there are consequences for
the choices that you make,” Willis said.