One and oh: GVSU football rolls over Indianapolis to open season 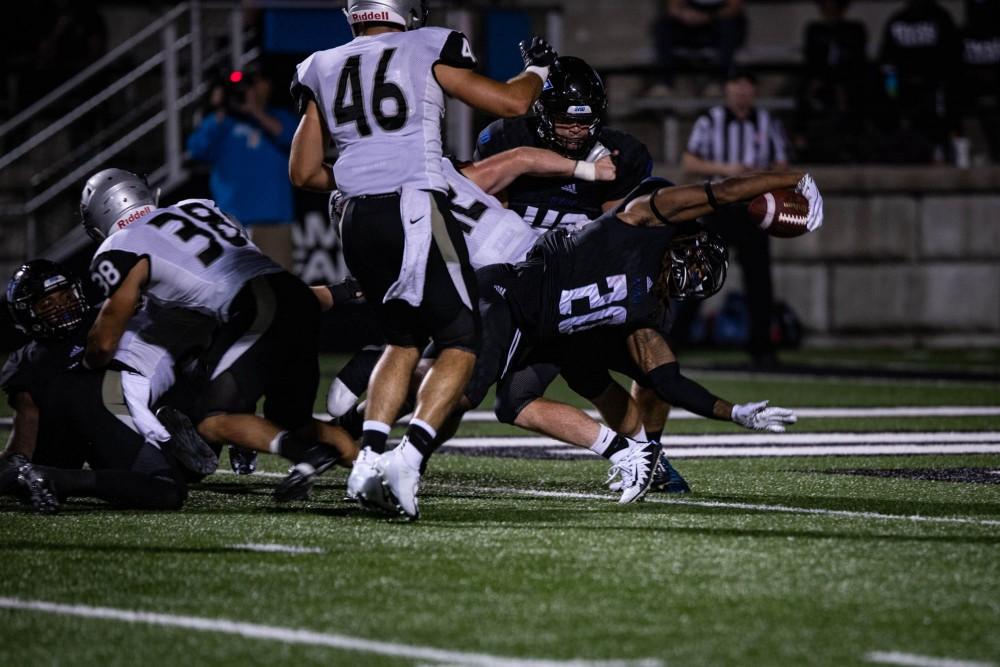 Chawntez Moss extends to score his first touchdown as a Laker in the third quarter against UIndy on Aug. 31. GVL / Sheila Babbitt

The No. 10 ranked Grand Valley State football team opened their season on a dominant note, defeating No. 13 Indianapolis 30-7 at Lubbers Stadium.

“Good team win. Obviously that’s a good football team we played,” said head coach Matt Mitchell. “Great job by our guys, our coaches, offense and defense coming together and playing even when we were down. We never questioned anything, we just kept playing.”

GVSU quarterback Bart Williams completed 50 percent of his attempts for 243 yards and two touchdowns, both of which were to wide receiver Austin Paritee who led the Lakers in receptions and receiving yards with eight and 134.

Running backs Chawntez Moss and Jack Provencher ran behind a dominant offensive line, picking up 135 yards on 15 carries and 54 yards on 12 carries respectively with both players finding the end zone.

The Lakers started the game by driving into Greyhound territory multiple times only for momentum to halt resulting in several punts.

Indianapolis struck first on an eight-yard touchdown run with 12:21 remaining in the first half and held GVSU scoreless for the next eight minutes before JJ McGrath’s 27-yard field goal. The Lakers truly gained momentum, though, with a seven-yard touchdown connection between Williams and Paritee with only 1:02 remaining before halftime.

“In the first half, I felt like we as the backs were pressing, we were pretty much getting into the flow of the game,” Moss said. “We came out in the second half with a completely different mentality. Just run downhill on them and the offensive line started to dominate. Once we got the rhythm going it was hard to stop.”

GVSU took control of the second half, scoring 20 unanswered points to put the Greyhounds away.

Not only did the Lakers offense step up in the latter half, but the defense held UIndy to only 41 yards in the third quarter and 39 in the fourth to cap off a measly 203 total offense for the game along with interceptions from cornerback Kalen Dunham and safety Jacob Studdard.

“It’s all trust,” said linebacker Isaiah Nkansah. “We don’t recruit guys to play zone, we play man. We do that so we can have seven guys in the box and stop the run. It’s just a lot of trust between the whole defense; that’s what we’re built on. Someone’s going to make the play. Get after the quarterback, (because) when he’s rushing he’s not as accurate so I think that has something to do with it.”

The 203 yards allowed by GVSU to UIndy is a far cry from the 382 they surrendered in last year’s loss to the Greyhounds with 326 coming on the ground compared to only 109 this time around.

Additionally, the Lakers dedicated themselves throughout training camp to playing disciplined football and reaped the rewards of their work.

“To be honest with you, what we saw tonight was the way our team practiced in camp,” Mitchell said. “I think we had really clean football play on offense and defense. There wasn’t a lot of pre-snap penalties throughout the course of fall camp. We weren’t doing stupid stuff after the whistle and what I saw out there tonight was probably more of a reflection of the way we practiced, the way we approached things in preseason camp.”

The Lakers will take nine days off before making the trek to Mississippi to take on the Delta State Statesmen (0-1) on Saturday, Sept. 8 at 7 p.m.