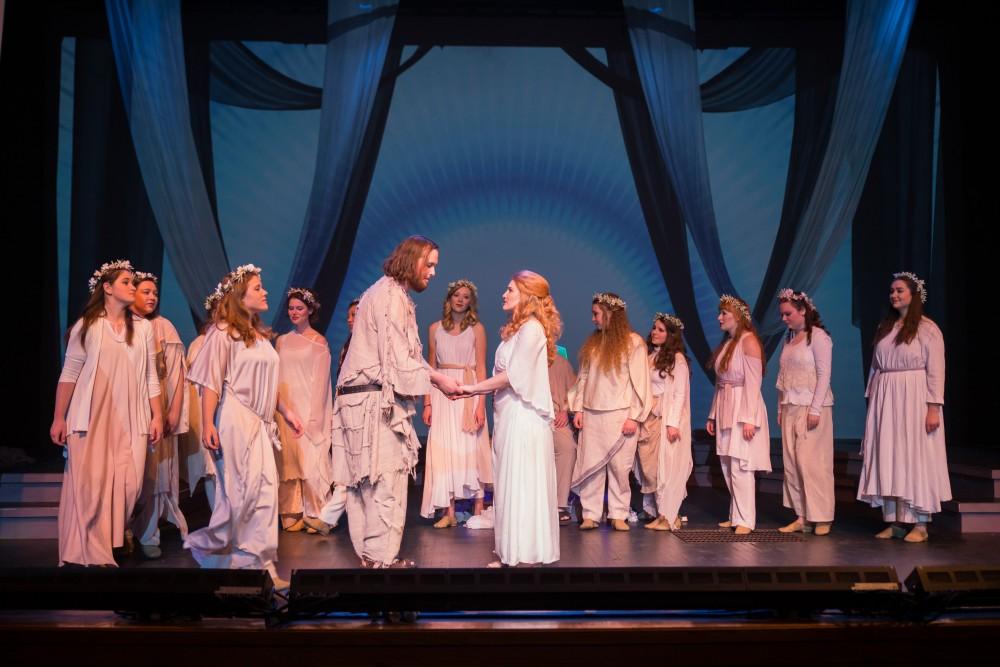 Unlike the original version, this new translation takes a different approach as translator Diane Rayor, a professor in GVSU’s classics department, gives it a contemporary script presenting an alternative version. Instead of mainly tragedy, the show offers lots of excitement and surprising comedy. With only a couple shows left, the show has gained positive responses from audiences.

The remaining shows will take place Thursday, March 30, at 7 p.m. and Sunday, April 2, at 2 p.m. in the Louis Armstrong Theatre, located in the Performing Arts Center on the Allendale Campus.

In this retelling of Helen of Troy, Helen never went to Troy. Instead, the whole 10-year Trojan War was fought over nothing because it was mistakenly believed Helen was in Troy, even though she really wasn’t. The resulting suffering on both sides is ultimately due to this misinformation.

“It’s just a really strange and interesting version of Troy story,” Rayor said. It’s one that very rarely gets produced.

“The way I translate, I have to do it with a production,” she said. “I can’t do it by my lonesome.”

Rayor said the actors and directors helped revise the script.

“All of the lines are really clear and really work,” she said. “They were all very involved and interested in it.”

This is one of Rayor’s four translated plays she will have published in a book under her contract with Cambridge University Press. This is also the third show she has asked Karen Libman, a theater professor, to direct.

“As a director, your job for any production is to try and make your script speak to an audience,” Libman said.

Libman said the translation from ancient Greek to modern English has made the show accessible to contemporary audiences. With the collaboration of visual artist Nayda Collazo-Llorens, a professor in the GVSU art and design department, and cellist Pablo Mahave-Veglia, the show has video screening throughout its entirety to produce background scenery and live music layered on playback music. This makes the show more modern with the technology used.

“While we chose this play a couple of years ago for production in 2017, I had no idea it was going to be so timely,” Libman said.

The show contains contemporary content relevant to what is in the news today, including the concept of perception. In particular, Libman related recent political events to the themes of the show.

“We have a presidential candidate who is now president who had this recording of him saying these awful things about women about how you can just grab them and they don’t care and you can do whatever,” Libman said.

In this version of “Helen,” the title character has experienced similar misdoings, starting with a beauty pageant gone wrong with the gods. The idea is that men’s perception of women’s beauty is what they say caused the war, so because Helen was beautiful, she was the one to blame.

The show consists of 23 student actors and 50 production workers. The student actors come from all different majors. Helen herself is played by student Mallory Caillaud-Jones. This is not her first role, as she has appeared as Madeline in GVSU’S production of “The Women of Lockerbie,” as Eva in GVSU’s production of “Kindertransport,” as well as in many productions not at GVSU.

Caillaud-Jones, a theatre major with a women, gender and sexuality studies minor, said she was lucky to get into the dramaturgy class for the winter production this semester where she received an in-depth introduction into Greek mythology, Euripides as a playwright and this play, “Helen.”

“It is unfortunately not very common to find strong female characters in both contemporary and classical plays, and this play is extremely female-centered,” Caillaud-Jones said. “Almost all the ancient texts that refer to Helen portray her as a passive subject of desire for men. This is the only tale in which she takes control and tells the story as it truly happened.”

Besides the role of Helen, the other student roles are very important in bringing this version of “Helen” to life.

“I have the experience to portray a strong-willed, intelligent, funny and dramatic woman with the help of my loyal and equally powerful chorus,” Caillaud-Jones said. “I also get the chance to act alongside some very funny and talented men, but the estrogen-empowered play is what fuels Helen’s determination.”

GVSU’s production of “Helen” offers an interesting mixture of tragedy and comedy.

“We have also gotten comments from a few audience members who have honestly told us that they are not a fan of theatre, but that this play blew them away,” Caillaud-Jones said. “I hope our audience is entertained. I hope they laugh as much as they cry and that they learn to appreciate a different take on the famous story of Helen and the Trojan War.”