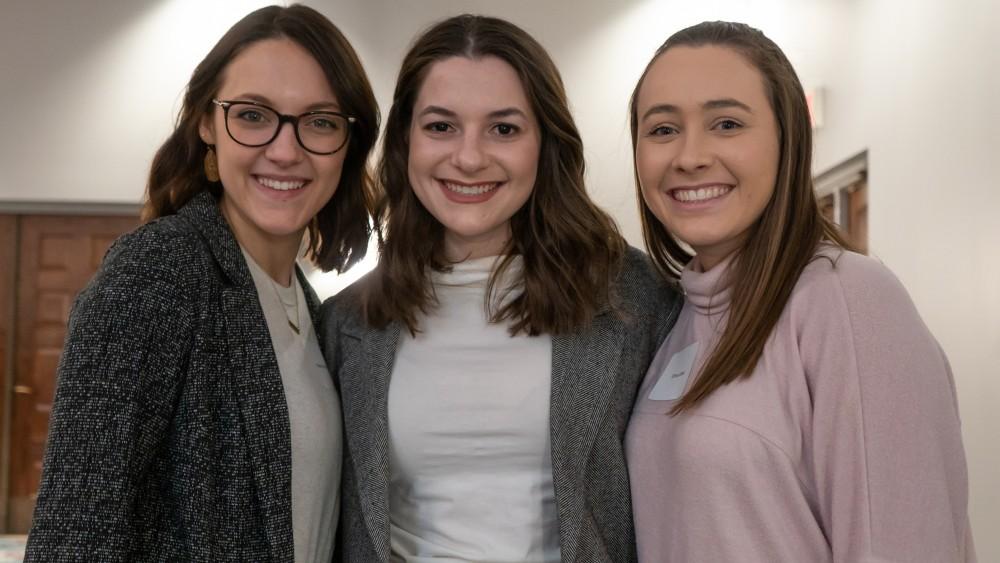 This year’s dinner title was “Listening To New Voices: The Next Generation Speaks,” and was centered around strengthening friendship and understanding among Abrahamic traditions, such as Judaism, Christianity, Islam and Baha’i.

President of GVSU’s branch of Hillel – a Jewish organization – Allison Egrin explained that she was asked by GVSU’s Interfaith Resource Center to speak at the dinner despite never having attended in past years. Egrin said she hoped that people gained a better understanding of the importance of sharing and appreciating other religions and cultures following the event.

“It is so vital to not only share our beliefs and culture with others, but to also learn from those around us,” Egrin said. “As a society we can be more understanding, open-minded and accepting to hopefully reduce bias and hatred.”

Egrin’s speech focused on how college has impacted her relationship with Judaism and her interfaith work. She explained that GVSU’s involvement in the interfaith community promotes acceptance and creates an inclusive environment crucial to many religious college students.

Egrin also said that being Jewish in the community has helped her educate many students unfamiliar with the religion and that educating others through her work in Hillel has helped her strengthen her own faith.

“Growing in Metro-Detroit kept me sheltered from the reality of being a minority and, quite frankly, allowed me to take my Jewish religion, culture and community for granted,” Egrin said. “Being at Grand Valley made me realize how important Judaism was to me and what a huge part of my identity it is. While I am constantly being bombarded with questions about my faith, I recognize the importance in sharing it with others.”

Program Manager at the GVSU Kaufman Interfaith Institute Kyle Kooyers explained that the institute prides itself in supporting interfaith work and sponsoring events that encourage connecting students of different faiths.

The institute puts on a number of different activities to build bridges of understanding and mutual respect between people of different religious, secular and spiritual identities. Events like the Abrahamic Dinner, the Rabbi Phillip Sigal Memorial Lecture and the Grand Dialogue are events focused around inspiring leaders and scholars who are doing incredible interfaith work in our community and around the world.

“Whether our attendees are students or community members, the (Abrahamic) dinner affords them the opportunity to hear from people outside of their usual circles or communities,” Kooyers said. “In doing so, we begin to dismantle biases, assumptions, fear and hatred toward people we once saw as ‘the other.’ In these voices, we are challenged to imagine an increasingly healthy community where all people are welcomed, valued and understood. In that dream, we find out just how similar we really are.”

Kooyers said that there are many opportunities for students to get involved in the interfaith community at GVSU, and that the Center for Interfaith Resources is a great place to start. The center offers sacred site visits, taking students to different houses of worship in west Michigan and lived conversations that provide spaces where students can talk about intersection of their religious, secular or spiritual identities with other aspects of campus or personal life.

Egrin said that Hillel also provides many events catered to Jewish and non-Jewish students on campus. The organization celebrates holidays, has bi-weekly Shabbat dinners and completes several community service projects throughout the year. Hillel also hosts several interfaith events during the year as well as collaborating with other cultural student organizations.

Additionally, a whole array of speakers, training and activities put on by interfaith organizations on campus help students fully explore and give voice to their personal tradition, while learning about the beliefs of others. These discussions will be brought to campus during GVSU’s annual Interfaith Week, which begins Monday, March 25.