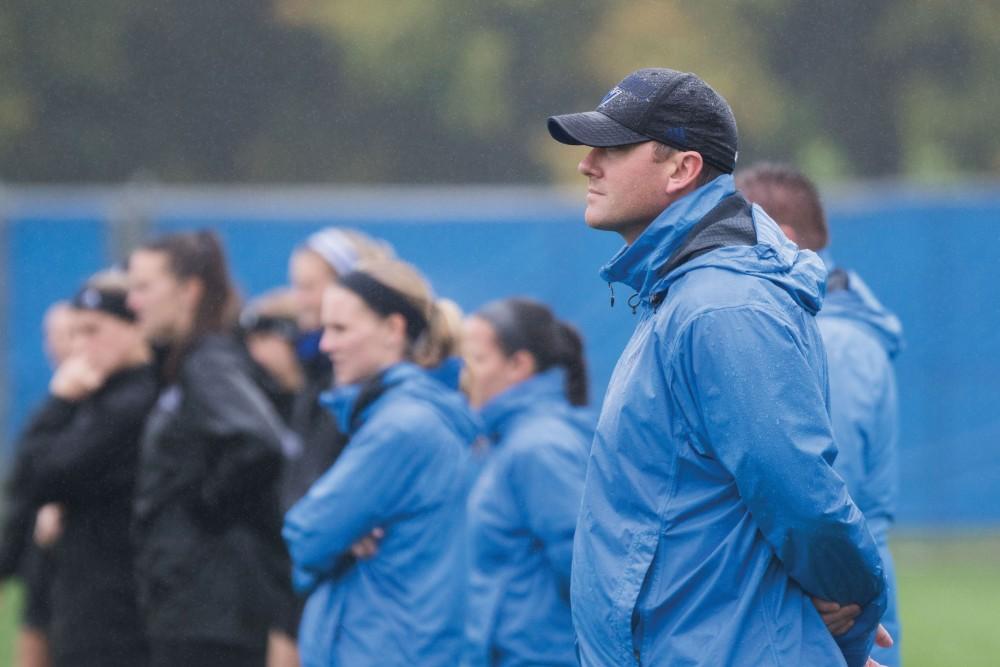 After falling to Western Washington in 2016’s Division II National Championship, the Lakers’ run of three consecutive national championships came to an end. It was the first time in the three-year tenure of Head Coach Jeff Hosler (68-5-4) that GVSU had failed to capture the national title.

Now, having lost a group of seniors that included one of the program’s biggest stars, the focus is shifted to the future.

The Lakers lost six seniors to graduation, including stalwarts like Marti Corby and Clare Carlson, who both signed to play for Grand Rapids Football Club, as well as key contributors Jayma Martin and Kendra Stauffer. Corby is considered one of the greatest players in NCAA Division II history, and Carlson was nominated for the NCAA Woman of the Year award in June. The decorated group of seniors had an evident impact on the program.

“All of those kids were tremendous competitors,” Hosler said. “They weren’t just competitors: They were winners. Their work ethic and professional approach to the daily grind will be missed.”

While the class of 2017 leaves behind a championship legacy, the team’s roster for the upcoming season has its notable mentions as well. Six players will return for their senior season, including the reigning National Player of the Year Gabriella Mencotti. The senior from Novi, Michigan, scored 29 goals in 26 appearances last season. She also contributed with a career high of 13 assists. Mencotti, who led the nation in scoring in 2016, will lead a senior class in search of its third national title.

Besides Mencotti, Hosler also pointed out other veterans in the GVSU program who are expected to have an impact on the upcoming season.

Johnson, a senior from Toledo, Ohio, plays as a holding midfielder, shielding the defensive backline.

“That’s a position that often goes underappreciated,” said Hosler, who thinks Johnson’s importance on the field is immense. “It’s not a position that accrues very many accolades.

She’s an absolute warrior for us. She’s a physical, rangy player that guts out tough plays, but at the same time facilitates what we do in possession. Last year was a breakout year for her, and we expect more of the same and marked improvement in her senior year.”

Behind Johnson, playing in the center of defense, is fellow senior Shannon Quinn. Hosler believes the defender from Grand Rapids will also continue to be key for the Lakers.

“She’s the director of our defensive unit,” Hosler said. “She has a high soccer IQ, and she’s a very technical player. She can do some pretty good things on the attack from a position that is normally just a defending position.”

Adding to the program’s returning talent is the biggest signing class in Hosler’s tenure as head coach. The Lakers will add 13 freshmen to their program, as well as two transfer students, Katrina Giantsopolous and Kristy Gomez, from Davis & Elkins College and Michigan State, respectively.

“There’s a lot of potential depth in that class,” Hosler said. “I think there’s the potential for some of those kids to step up and have key roles. They’ve got to add something (to what) we’re already doing, and to be fair, there are kids that are going to have to do that in order for us to have some success this fall.”

The goal surrounding the program remains the same: to win a national championship. Not being the defending champions, however, hasn’t weighed on the mind of Hosler.

“It’s a little refreshing, in a way, that we don’t have that same expectation that we’ve had in the past where we’ve won it the year before and we’re expected to win it again,” he said.

The team, however, is still hungry to reclaim the top spot.

“There’s a little bit of extra motivation,” Hosler said. “Seeing our seniors go out the way they did and ending their careers, I think it opened some eyes that it takes a lot of extra little things to win a national championship. We didn’t do a lot of those things, and I’m hopeful we’ve learned our lesson.”

GVSU plays host to the University of Wisconsin-Parkside in an exhibition Saturday, August 19.