The ‘buzz’ on honeybees 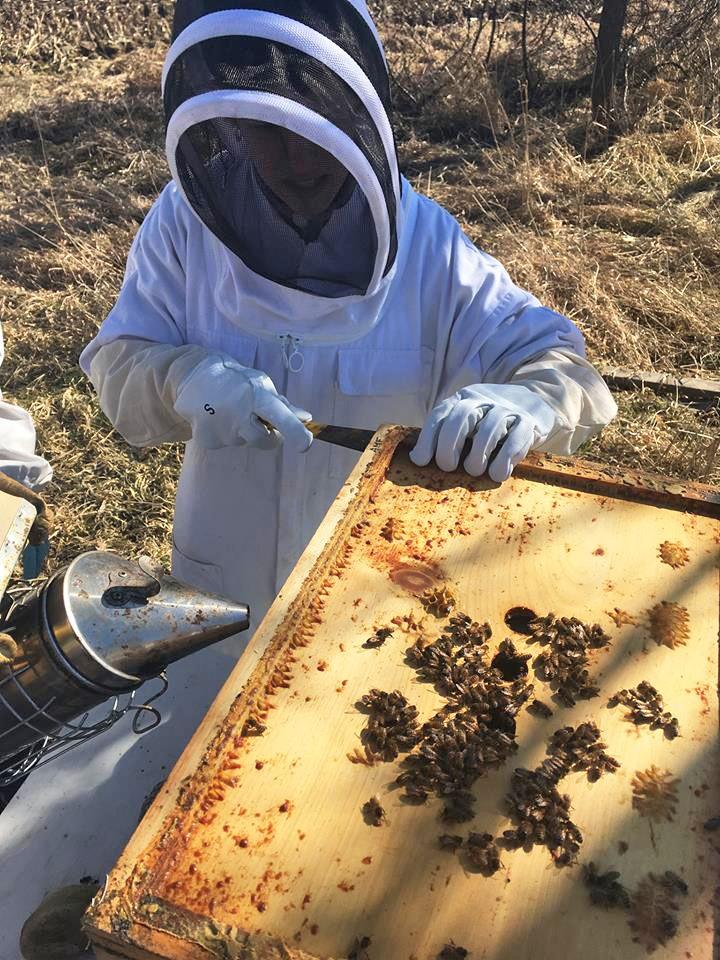 The plight of honeybees in the world is still a major concern for the future of the ecosystem and the conservation of the environment. Pesticides, invasive plants, invasive parasites and deforestation are all causes of the global decline of honeybee populations. The Grand Valley State University beekeeping club is helping to raise awareness of the decline of honeybees by hosting events that feature information about honeybees and show off natural products made with GVSU bee honey.

The GVSU Beekeepers held an event Friday, March 17, called “Teas, Bees and Beekeeping” to discuss the basics of honeybee biology and to educate on the fundamentals of beekeeping. Liberal studies professor Anne Marie Fauvel gave the presentation on honeybees to the mixed crowd of those who were either a part of the beekeeping club or were interested but thus far noncommittal.

Megan Damico is one of the three co-presidents of the GVSU Beekeepers and said the event was created because of feedback from members who wanted more general knowledge about honeybees.

“We thought it would be a good thing to start with basics, so really learning the fundamentals of bees that helps you see the broader picture of why beekeeping is important for conservation,” Damico said.

Fauvel said the winter season is the time when beekeepers see the most hive loss, but this winter, the beekeeping club has experienced an unprecedented zero percent hive loss during the past few months in both the Holland and Allendale apiary sites. Fauvel attributed the success to the “warm” winter of 2016-17 but said the weather has made the bees more active during a time when they should be less active, causing them to eat up their food stores more quickly, so much so, in fact, that Fauvel has had to actually feed the honeybees.

“Normally, every year I put in one sugar block as an emergency feed in case they need it, and I usually take it out untouched in the spring,” Fauvel said. “This winter, I’m currently on my third round of sugar blocks.”

As a beekeeper, Fauvel said she is constantly paying attention to the weather for the sake of her bees, like a farmer. She said if the “warm” winters continue, it could impact the bees in terms of survival and honey production.

“Like any good farmer, my life relies on the weather, and so does the bees’,” Fauvel said.

The apiaries in Allendale and Holland were cleaned for pests, including the Varroa mite, in early September, which Fauvel said could also be a factor in the high survival rate.

Two co-presidents of the beekeeping club, Emily Noordyke and Kali Smolen, will graduate this year from GVSU. Fauvel said she hopes to find individuals with interest in leadership as replacements for the beekeeping club so the organization can stick together and the work will not all fall to her.

Damico said recruitment and interest in beekeeping club is high. She said while there are only 10 members, she expects that number to grow.

“I just really want to make it a strong club so it can keep moving once we all graduate,” Damico said.

“It’s really cool to just put all these people in a room and find the commonality between them, which is a weird obsession with bees,” Damico said.

The GVSU Beekeepers held honey extraction and bottling events in the fall and also held a salve-making event using beeswax Friday, February 17. The club has received funding to build an equipment shed and to “re-vamp” the Allendale site by relocating it onto a more solid foundation, which Fauvel said will take place in April 2017.

The GVSU Beekeepers have a Facebook page with more information on the club and the dates and times of future events. The beekeeping club is also selling the honey they have collected for $8 per jar, which can be bought at tables in the Kirkhof Center or in Lake Ontario Hall, Room 324.