Gymnastics club has success without coach and funding 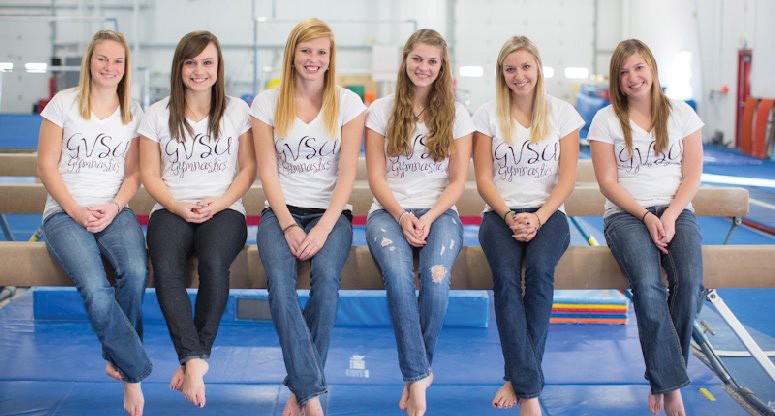 Not every team needs a coach.

The Grand Valley State University gymnastics club team continues to compete at a high level this season despite a shortage of coaching, funding, participants and upperclassmen.

The team is led by GVSU senior Bethany Ryder, who said dedication has made up for what the team lacks.

“This sport requires dedication,” Ryder said. “It was a challenge for us this year because fewer scores are being pooled. We’ve grown closer because we’ve had to be at our best.”

Through three events, they’ve been able to do just that.

Ryder said GVSU placed at each competition this season: the Buckeye Classic at Ohio State University, the Miami Cup at Miami University and the Clover Classic at the University of Notre Dame. The trio of top-three finishes is quite a feat for a squad without an official head coach.

“We’re all on the same page,” said GVSU junior Amy Burke. “We recently did some reassessing with our commitment levels and we really want to get serious about this and perform well. We’re in it for fun, but there’s definitely a competitive aspect that requires a competitive attitude.”

Perhaps more impressive is the team’s ability to succeed despite a roster that is made up mostly of underclassmen. The team has only one senior and two juniors, compared to three sophomores and five freshmen.

“There were a lot of new faces when I came back,” she said. “This year is mostly about building for years to come. We haven’t had too many meets this season, but we’ve really progressed in the last couple of weeks. We have a lot of young people who are really amped up and want to compete.”

The team treasurer said she has been impressed with freshman Kahley Emens, who has shown promise to her teammates with an exceptional work ethic.

Emens said she’s been preparing for quite some time.

The team has made strides recently with the help of volunteer coach Amy Sturrus, who was a senior on the team in 2012. Sturrus helps out with the team every Sunday at Flights Gymnastics in Allendale.

The venue was scheduled to host the team’s only home event of the season, the Laker Invite, on Saturday in a two-team dual against Michigan State University’s club team, but Michigan State cancelled. The team now looks ahead to “Michigan Madness”, a March 31 event at Eastern Michigan University which starts at 9 a.m.

The trip to Minneapolis, Minn. for the April 11 NAIGC Nationals is still up in the air due to financial limitations, but Burke said the team will do everything in its power to attend.