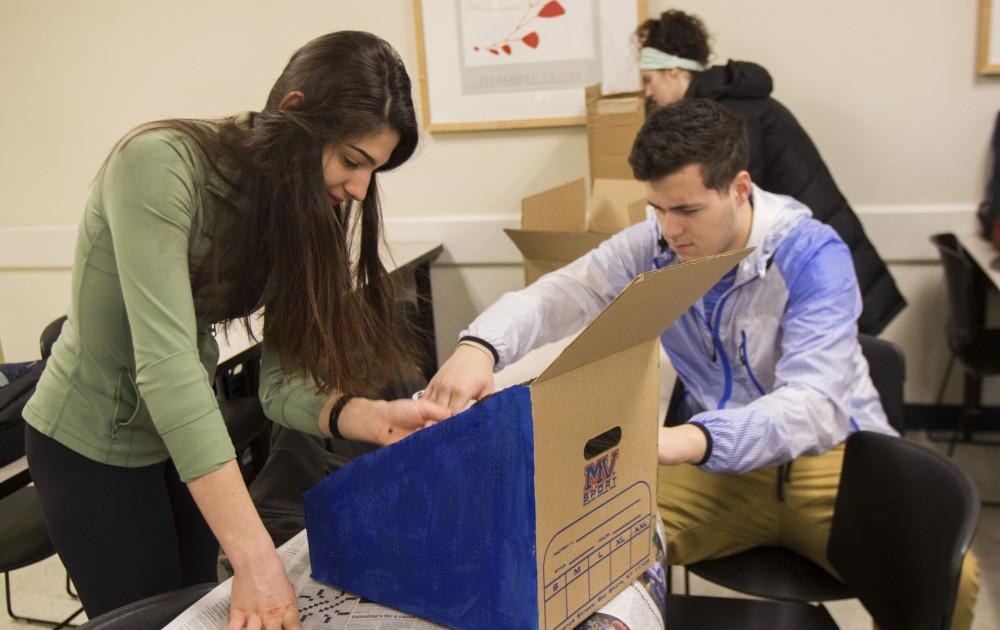 Several Grand Valley State University students aim to promote creativity and imagination by creating an arcade made of cardboard. Proceeds from the arcade will go to the Imagination Foundation.

For $1, students, faculty and staff can purchase a “fun pass” that allows for unlimited play. The arcade will take place Thursday, March 2, at the Grand Rapids Children’s Museum from 10 a.m. to 11 a.m. It will also be held Friday, March 3, from 9 a.m. to 11:30 a.m. at the Kindschi Outdoor Lobby on the Allendale Campus.

The Global Cardboard Challenge came about after a young boy, Caine Monroy, in California created his own arcade out of cardboard. His creation inspired a short documentary film, “Caine’s Arcade,” which went viral and gained attraction worldwide. With this result came the Imagination Foundation. The mission of this foundation is to find, foster and fund creativity, as well as entrepreneurship in kids like Caine.

“We thought it would be just a good activity hands-on for the students,” John Kilbourne said. He noted that his assigned class readings talk about the importance of the progressive model of education and working with your hands compared to the traditional model of Scantrons and PowerPoints.

“It’s about engaging,” he said. “It’s about doing good for others. It’s about taking risk, and so this is a perfect opportunity for them to do that.”

Participating students have been working during class to create games from scratch as well as games that were similar to already created arcade games.

“My partner came and she brought the cardboard, and then Dr. Kilbourne brought all the paint, balls and all the other supplies,” said Jake Elliott, a student in John Kilbourne’s class. “This is our second class week working on it.”

“Beat the pro is basically a field goal challenge,” Elliott said. “We have a ball tied to a string on a tee the you flick into the field goal for a token.”

“We set it up to where you can drop a marble down onto our little spinner board, and then you just pick or take a guess at what you think the marble is going to land on,” Marciszewski said. “If you guess right, you win.”

Other games are still in the beginning stages, while some are mostly done.

The Global Cardboard Challenge is held in over 70 countries with over a million kids participating. Past GVSU Cardboard Challenges have raised more than $800 dollars for the Imagination Foundation, and organizers hope to raise more while promoting innovation, imagination and creativity.