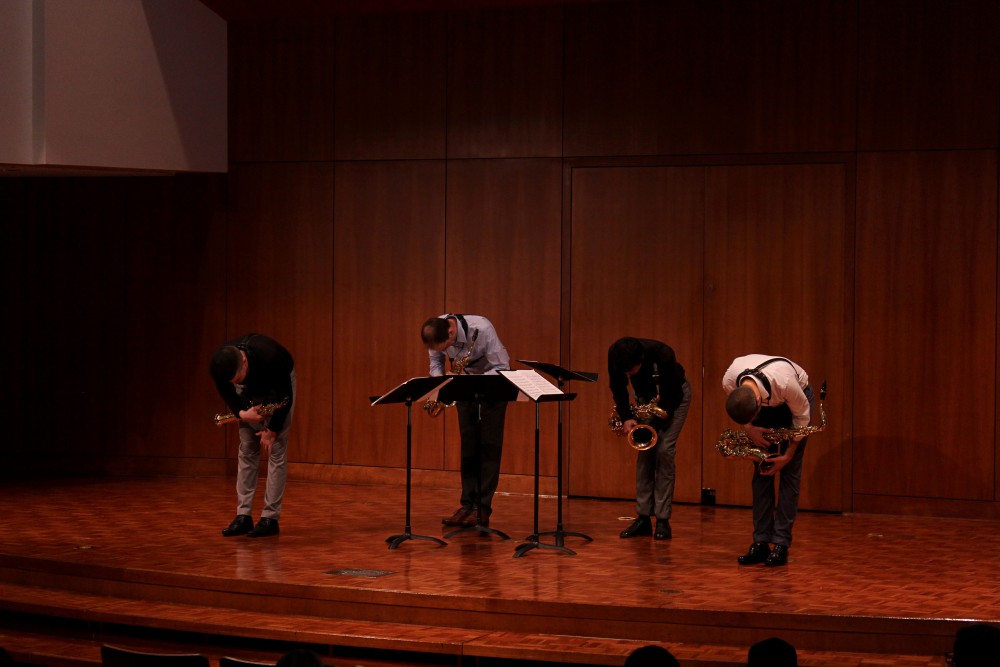 The Donald Sinta Quartet incorporated the historical and fresh sounds of the saxophone during their performance at the Cook-Dewitt Center on the Grand Valley State University Allendale campus. The concert was held on Oct. 10 as a part of GVSU’s Arts at Noon program.

The quartet is comprised of GVSU Saxophone Professor Dan Graser, as well as Joe Girard, Danny Hawthorne-Foss and Zach Stern. The saxophonists were united as students at the University of Michigan in November 2010 when they were chosen as the featured saxophone quartet on the Michigan Symphony’s tour of China. The choice of featuring a saxophone quartet on the tour was prompted by the 50-year anniversary of the Michigan Symphony’s tour of The Soviet Union, which featured Donald Sinta, the quartet’s professor and namesake.

According to Graser, the quartet has won five first-prizes from competitions in the last eight years they have been performing professionally. Recognizing the music field as “incredibly competitive,” Graser said. “Each time we did a competition and came out with the top result, we took a measure of pride in that.”

Graser said one of the quartet’s proudest accomplishments is winning first place at the 2013 Concert Artist Guild Competition, establishing themselves as the first saxophonists to claim the title. Along with this championship, the quartet received management out of New York City and the opportunity to hold a recital at Carnegie Hall, which New York native Graser said he found particularly special.

During their Arts at Noon performance, the quartet played a mixture of new and old music.

“Our group sees our mission as twofold: two commission-living people to write for us and also embrace music from the past and perform it in our way,” Graser said.

The concert opened with a French piece, “Introduction et Variations sur un ronde populaire,” which, according to Graser, was one of the first saxophone quartet pieces written for a professional group in 1936. Graser defined the opener as light and humorous.

The quartet also performed new pieces written in 2017. The piece following the opener, “Cerulean,” was commissioned from David Bidenbender, the group’s classmate at the University of Michigan and current faculty member at Michigan State University. The lullaby was written to capture the beauty of the color of the Bidenbender’s newborn baby’s eyes.

Each year, the quartet runs a competition for composers which Chris Hass won with his piece “Volcanic Ash.” The quartet incorporated Hass’s explosive yet soft piece in the concert.

“This piece reflects a very soft, expressive prayer of thanks,” Graser said. “Beethoven’s ‘Heiliger Dankgesang’ is a bucket-list sort of chamber pieces and some of the best stuff that has ever been written,” Graser said.

Rounding off the concert with elements of funk and groove, the group performed Marc Mellits’ “Ex Machina,” which Graser said satisfies the way people are most familiar with the saxophone.

Graser applauds the Arts at Noon program. “This program is an enriching experience for students to get exposure to groups you might not otherwise encounter in your day-to-day life for free,” he said. “It’s important that you never just live in your little bubble.”