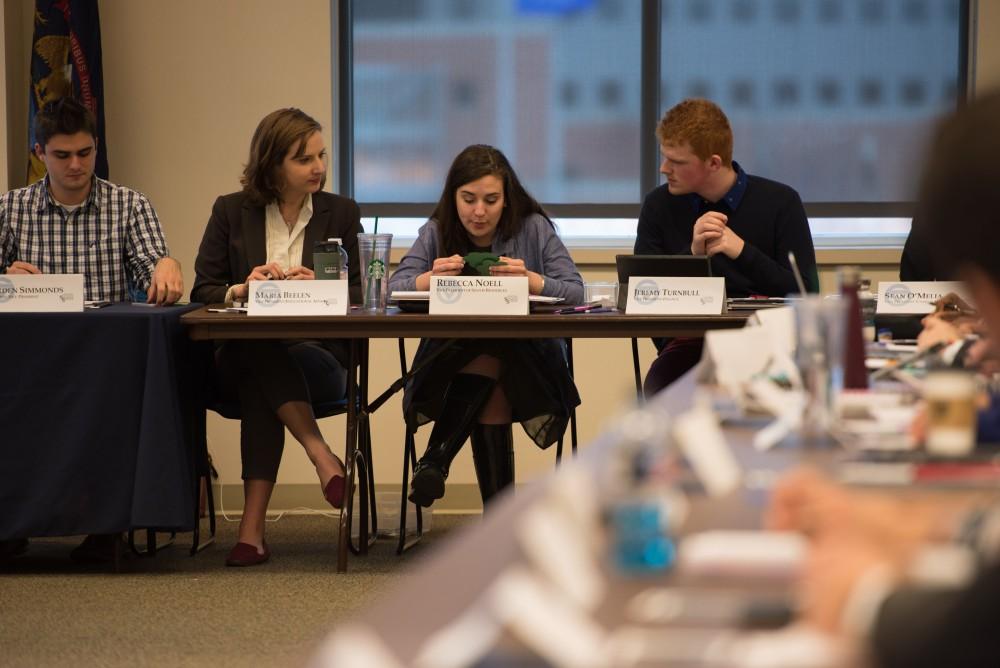 With bittersweet smiles and more than a few tears, the 2015-16 Grand Valley State University student senate held its last meeting on April 7. The vice presidents of their respective committees gave their last reports and senators thanked those around them for making a difference in their campus community.

However, immediately following the adjournment of the current senate, GVSU’s new 2016-17 student senate had its first meeting and got right down to business. Maddie Cleghorn, student senate president, and Jorden Simmonds, executive vice president, ran the meeting. As new cabinet members have yet to be elected, Cleghorn and Simmonds will also run next meeting until new members are appointed to their spots. The current senators’ terms do not officially end until May 1.

As the senior and non-returning senators filed out of their seats, the returning and newest senators filled them in. Right away, it was made clear to the new senators they had big shoes to fill.

Bob Stoll, faculty adviser for student senate and the associate dean of student life, introduced himself and welcomed the new senators.

“We’re here as a team to make this a better university and this is one of my great opportunities and experiences every year working with this group and leadership, so welcome aboard,” Stoll said.

Cleghorn also welcomed the newest members to senate, assuring them they were set up to fill a great legacy left before them.

After everyone seemed to settle in, the nominations for the next year’s cabinet started. Senators, old and new, were allowed to nominate whomever they wanted, as long as they provided rationale for why they would be a good fit for that particular position.

There were three nominations for president and three for executive vice president.

Next week, the nominees will get five minutes to give a speech on why they believe they deserve the position, followed by five questions or 15 minutes, whichever happens first and then 10 minutes of discussion.

Old senators spoke up during public comment to help welcome the senators and give them a glimpse into how senate works and why it’s so important to get to know the cabinet nominees before electing them.

Maria Beelen, vice president for the educational affairs committee, stressed the importance of getting to know the people who were nominated and not to vote for someone just because of a friendship.

“I just really encourage you to get to know the people you don’t know for these positions, because just because you’re good at something, doesn’t necessarily mean you’re a leader in that position,” she said. “Go out and try to find the best person for the position, whether they’re your best friend or not.”

“You guys are here to serve the student body. Everything you do needs to be in reflection of them,” he said. “With these elections, what you are really setting is the precedent and tone for next year and I would definitely encourage you to seek (the nominees) out, talk to them, ask their ideas, because these are people you have to work with and people that are going to lead you next year.”

Elections for the 2016-17 student senate cabinet will take place on April 14 at 4:30 p.m. in the Pere Marquette Room in the Kirkhof Center.