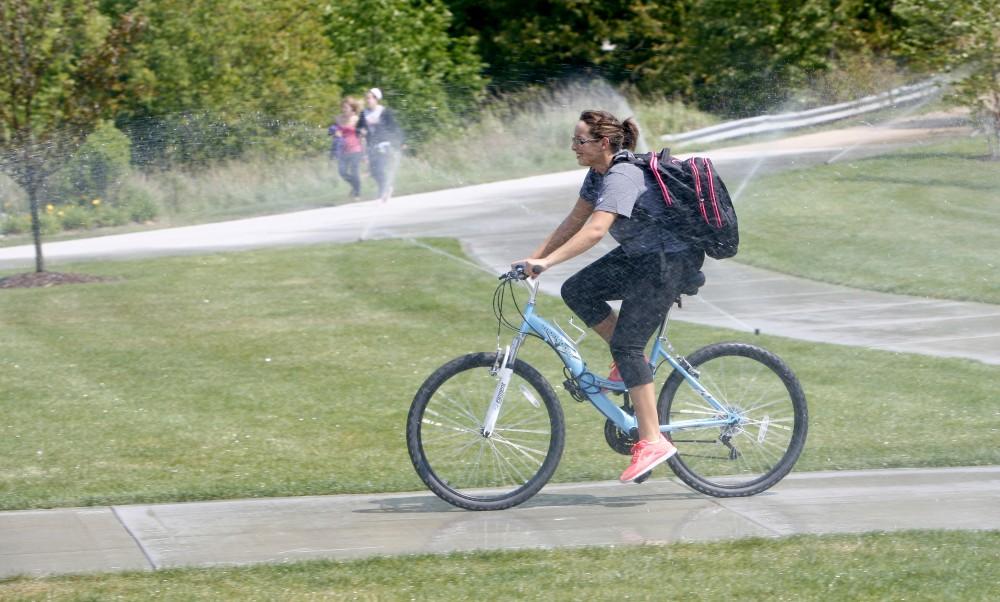 A crowd of Grand Valley State University students gathered beneath the Transformational Links Friday afternoon to listen to a group of evangelical Christians, who while wielding crucifixes held signs that read “You Deserve Hell,” and “All Sinners Shall Be Destroyed” – words that had many students on the Allendale Campus up in arms.

Led by George Edward Smock, more widely-known as Brother Jed, and a small group of other members of “Campus Ministry”, who travel to college campuses all over the country to spread their beliefs to students, the evangelists condemned students for allegedly having practiced sinful ways, including alcohol consumption and overt sexuality.

From songs and signs to the three female students who took off their tops and approached one of the women in Campus Ministry in the bras, the groups’ words incited protest from onlookers, who questioned Brother Jed on logical fallacy and misinterpretation of the Bible.

“People like this give Christianity a bad name,” sophomore Olivia Jenison said. “We don’t judge others because we are all sinners.”

Campus Ministries continued to preach despite of the largely negative reactions from the crowd, though not all students opposed the message or the methods of Brother Jed.

In Mike Reed’s opinion, as supporter and member of the ministry, he thinks the group is trying to “bring hope of eternal life.”

Officers from the Grand Valley Police Department were on the scene if the situation became dangerous for either parties, but there was no reported violence from either side; though, if there were, it wouldn’t be new for the evangelists, who recalled a situation in Lansing where an anonymous passer-byer told them a dangerous substance was put in one of their water bottles, though nobody was harmed as a result of early warning. Reed also talked of one instance when his tires were slashed at another campus.

Brother Jed said he and his group are of the evangelical denomination, but are unaffiliated with any particular congregation. They have visited college campuses in all 50 states as well as abroad, and they will be making a visit to the University of Michigan next week.

View a slideshow of Brother Jed on campus here.