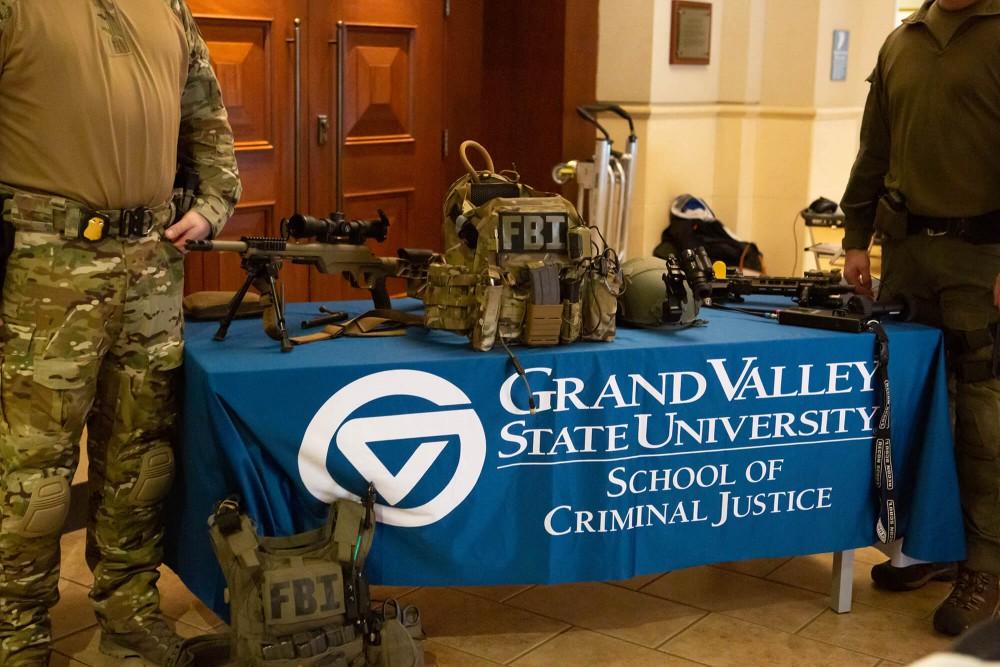 On Tuesday, Jan. 25, students from any academic area interested in working for the FBI were able to get a glimpse of what that future would hold for them at the 2019 FBI Collegiate Academy held in the Loosemore Auditorium in the DeVos Center on Grand Valley State University’s Pew Campus.

The day-long workshop involved many activities. From seminars, to a recruitment presentation, to a “Lunch and Learn,” students in attendance were offered a variety of inside looks into the life of an FBI agent.

The seminars, which were presented by agents and staff from the FBI Detroit division’s Grand Rapids Resident Agency included actual cases (and) investigation examples.

The agents brought with them a variety of equipment and showed students in attendance the newest tactical equipment used by the FBI.

The “Lunch and Learn” portion of the workshop was a question and answer session involving approximately 20 FBI agents and curious students.

David Bageris, one of the students in attendance, said that “the meet and greet at lunch” was the highlight of the day.

Bageris said that he had some interest in joining the FBI, but ultimately decided to attend the workshop because it was a “free expansion of knowledge.”

The “Lunch and Learn,” along with the FBI’s recruitment presentation, were ways in which the agents encouraged the recruitment of students in attendance while also sharing testimonials of what life in the field is like.

Wallace addressed the success the “Lunch and Learn” and recruitment presentation had on students’ interest in joining the FBI, noting that it played a key role in getting Lakers to become more involved in the FBI.

“Many students expressed interest,” Wallace said. “I believe that their interest in eventually joining the FBI was the motivating factor in registering for the majority of the attendees.”

Bageris also acknowledged the impact the FBI agents’ recruiting strategies had on him, and while he admitted that he wasn’t entirely sure of joining the agency, he said that he could “maybe” see himself as an FBI agent in the future.

Wallace also addressed the overall goal of GVSU’s School of Criminal Justice’s decision to put forth the event.

Wallace said that supplemental education on federal crimes and investigations was a key factor in the reasoning behind the event.

He continued by adding that community engagement was another important component. By including students from all academic areas, as the event was open to students of all majors, more student involvement was guaranteed.

Assisting GVSU students who are interested in working with the FBI was another overall goal of the workshop.

Students who expressed a strong interest in joining the FBI, along with students like Bageris who were unsure of joining, were both able to get a first hand experience at what it would be like to be an FBI agent. This inclusion helped these students determine whether or not they think that joining the FBI is the right career path for them.