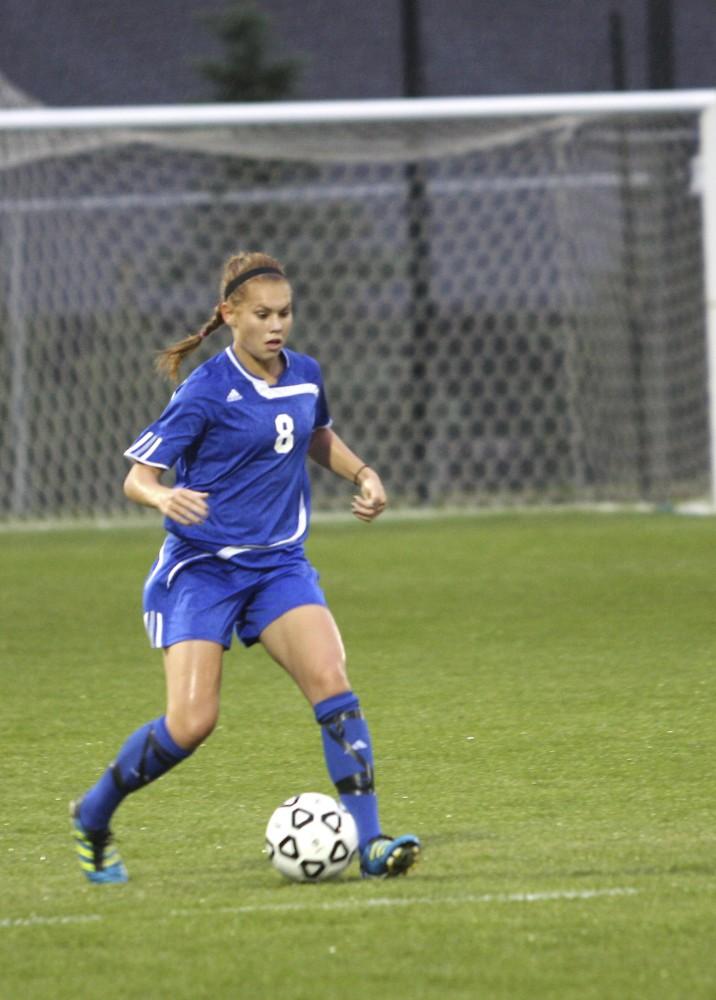 After being on the road for the better part of a month, Grand Valley State University’s soccer team returned home with a bang this weekend. The Lakers beat Michigan Technological University and Northern Michigan University to put themselves in a first-place tie with Michigan Tech for the GLIAC lead.

Friday night, the Lakers, faced off against a Michigan Tech team that had yet to be defeated in GLIAC play. From the first whistle, GVSU dominated play. In the 3rd minute GVSU nearly took an early lead, but senior Kayla Addison’s shot rattled the post. GVSU found themselves straying offside on different occasions in the first 20 minutes but, after sophomore Jenny Shaba beat her defender, she was able to slip one past the Michigan Tech goalkeeper to give the Lakers a 1-0 lead in their first home game since Sept. 22.

“It’s always nice to play at home,” Shaba said. “We always have huge fan support and it’s great playing in front of our families. It’s difficult to have confidence as a forward but after some goals it gives me confidence going to the postseason.

Shaba had an opportunity to play 75 minutes and hurt Michigan Tech with her pace while Maria Brown was held out of this weekends action with a knee injury.

“It was precautionary,” DiIanni said. “She could have played if she had to. But, its a long season, and I thought Jenny filled in very well for her.”

GVSU continued to dominate in the second half, and after three more second half goals from Addison, Erin Hilbert, and Ashley Botts, Shaba closed out her impressive evening by shooting one home to give the Lakers a 5-0 lead and a massive conference win.

“We came into this weekend knowing that we had to push,” Botts said. “And to stay on our home field for GLIACs, we all played really, really well, we couldn’t have asked for a better game.”

Botts opened the scoring for the Lakers in the 15th minute with her fourth goal in her last three games, after struggling to get on the scoresheet earlier in the month.

“Dave told me to just have fun, today was senior day, and to come out here and finish with a couple goals was great for me. Once you get one your confidence get’s up and you keep scoring,” Botts said.

In the first half, GVSU continued their theme of massively outshooting opponents this season by tallying 11 shots to Northern Michigan’s one. Sophomore Cassandra Wiltshere capitalized on one of those shots in the 38th minute, giving GVSU a 2-0 lead going into the halftime break.

It was more of the same in the second half, with the Lakers peppering the Northern Michigan goal. Sophomore Charlie Socia put one home in the first few minutes of the second half, followed by goals from Addison and Botts and three late Casey McMilan strikes that completed the Lakers 8-0 win and an impressive GLIAC weekend sweep.

“I think that getting Botts and Addison going is going to be important no matter what game we’re playing,” DiIanni said. “Botts, in particular, scoring some goals finally in the last two weeks. That’s only going to help us as a team as we move forward.”

GVSU finishes the regular season this weekend away at Lake Erie and Notre Dame.