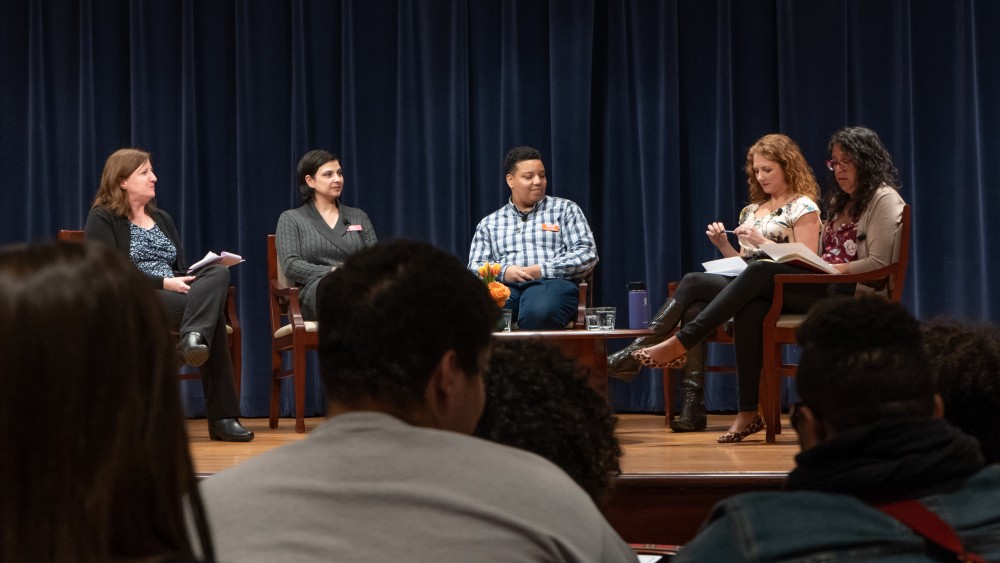 Four individuals convened on the Loosemoore Auditorium stage over a small program at Grand Valley State University that changed each of their lives forever. The four alumni, Kristen J. Cuhran Fuller, Jazz McKinney, Erika VanDyke and Dani Vilella, are from the Women, Gender and Sexuality Studies (WGS) program at GVSU and returned to the university to celebrate its 45th anniversary.

The WGS anniversary celebration was held on March 21 on GVSU’s downtown campus with several other workshops occurring during the week with keynote speaker Dr. Mel Michelle Lewis. The event centered around the effect the WGS program has had on its students, community and the progression of marginalized voices. Beginning with an alumni panel, the celebration was able to note how WGS studies can make all the difference both before and after college.

“I attribute having the (WGS) minor to realizing I could affect change, and that was huge,” Fuller said. “Because women studies brought to me people’s voices from around the country (and) from around the world that I had not understood before.”

The program’s emphasis on telling the stories of people across spectrums appears to have helped many of its students and alumni alike see new perspectives of a world they thought they knew. Even the mission of WGS incorporates intersectional feminist and queer perspectives into a curriculum that aims to challenge society structural inequalities. At GVSU, Women’s Studies has been taught since the beginning in 1973, when its courses were held in the College of Arts and Sciences and the William James College.

It took several milestone years to establish the minor in Women’s Studies in 1986 and the Women and Gender Studies major program in 2006. WGS has continuously strived to demonstrate inclusion and representation, eventually offering a minor in LGBTQ Studies in 2013. As the program advances forward, its faculty and staff continue to inspire WGS students to follow education paths that invest in the things they care about most.

“WGS classes taught me that the things I was interested in and cared about could be applied through practice,” VanDyke said. “It gave me this history of resistance that exists and that it’s a lot easier to be brave when I’m advocating for someone else. That practice taught me how to start building relationships across any number of differences.”

Each of the WGS alumni panel has moved on to advocate for others, through supporting resources for women and queer people, promoting the stories of marginalized groups and conducting outreach therapy. In exemplifying the progress the alumni panel have made with their WGS background, the anniversary celebration noted how even a simple minor can make the difference in an advocate.

“Unfortunately, activism is a job that will never be done,” McKinney said. “There is always something that we have to work toward to make sure people are being treated like people. The minor, having that knowledge of the shoes I’ve stepped into today from the people that were before me, gives me that strength to keep going.”

Advocacy and elevating marginalized voices are key components of the WGS program and were discussed more thoroughly during the anniversary’s keynote address from Lewis, who was the final speaker of the celebration prior to the anniversary dinner at Gallery Divani. In 2008, Lewis served as Interim Executive Director of the National Women’s Studies Association and recently published a book titled Femme Query: Pedagogy, Pleasure, and Queer of Color Possibility.

To begin her keynote address, Lewis played the ‘unofficial anthem’ of the feminist movement ‘I am woman’ by Helen Reddy. Lewis went on to discuss the many historic events happening in 1973, the same year GVSU began offering Women’s Studies courses. These include the monumental decision on abortion in Roe v. Wade, the battle of the sexes tennis match between Billie Jean King and Bobby Riggs as well as the Watergate scandal. Each of these events and more were altering the status quo of how gender and power were being discussed at the time.

Lewis believes that both the struggles of women and queer people of yesterday and today require recognition both academically and socially. With GVSU’s evolving WGS program, centering these voices will likely continue to serve as a civic foundation which builds communities that ensure gender justice.

“As black feminists and black lesbians, we have a very definite task before us and we are ready for the struggle ahead,” Lewis said.