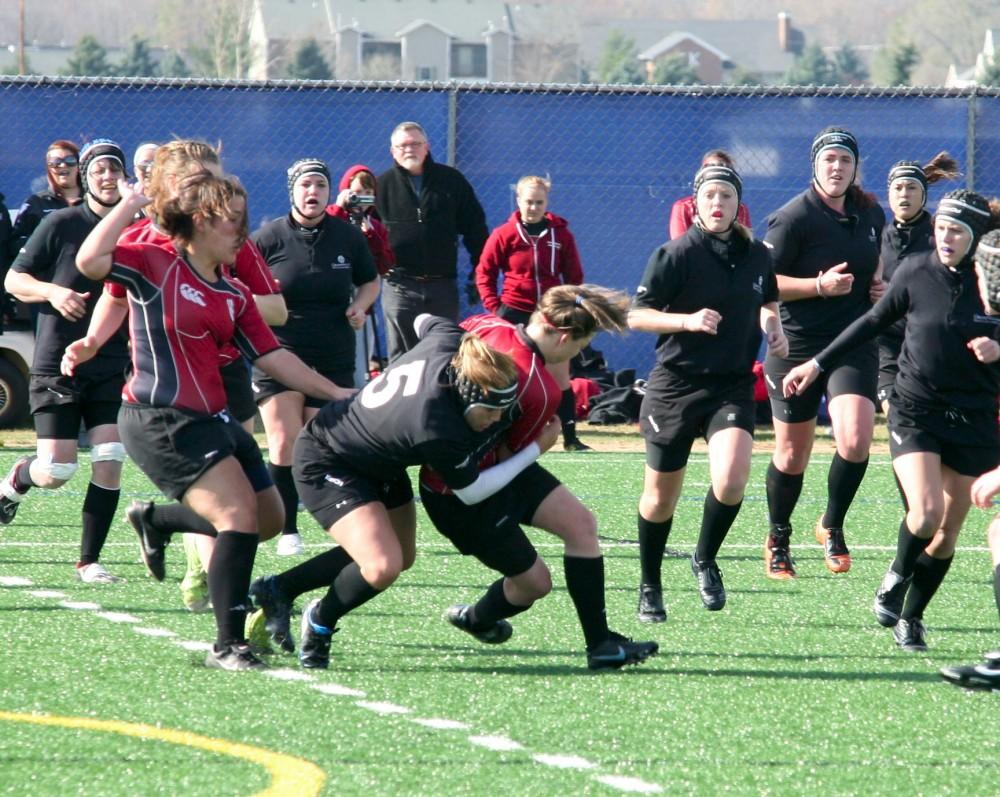 National Championship aspirations remain very much alive for both rugby clubs at the start of November.

The Division I women’s team (6-1) will play the University of Wisconsin-Milwaukee in the quarterfinal round of the Midwest Playoffs in Allendale at 11 a.m. Saturday. The Lakers are coming off a 45-5 home rout of previously unbeaten Indiana University on Oct. 30.

The Division II men’s team advanced to the Final Four in the Midwest Regional Playoffs after winning both of its matches in Pittsburgh during the weekend. The Lakers defeated top-seeded Indiana University-Pennsylvania 13-12 after being down 12-0, and then they downed West Virginia University 37-24.

The men will look to avenge a 16-14 loss suffered earlier this season when they play in a rematch against rival Michigan State University in the regional semifinal on Nov. 13 at Indiana University. A win over the Spartans would see the Lakers play the winner of the other semifinal between the University of Wisconsin-Whitewater and St. Johns University-Minnesota and assure the team a spot in the spring’s National Final 16 Tournament.

“Last time, we dug ourselves a hole early on and were down 13-0 after the first half,” he said. “This time around, we’ll look to spread the field defensively, tackle with support, transition well between defense and offense and get guys to the middle of play in order to win.”

The rivalry game with MSU, which dealt the Lakers their only loss of the season, should yield a heated matchup with the winner guaranteed a spot in the National Final 16 Tournament.

“Everyone is excited for the opportunity to play (Michigan) State again,” he said. “It will come down to us exploiting and capitalizing on our opportunities.”

Mullett cited excellent senior leadership and the facilities GVSU has provided the team as part of its success this season, qualities that women’s rugby coach Bob Richthammer also holds dear.

Richthammer attributed some of the success of this season to the new turf field that he said gives GVSU a “huge home-field advantage,” particularly against clubs familiar with playing on grass pitches, such as Wisconsin-Milwaukee.

“The turf field has really helped us develop into an open-field speed team,” Richthammer said. “(Wisconsin-Milwaukee) is a very physical team and will try to control the tempo and game-flow. The key will be making them play at our speed and pace.”

“One of our goals going into the season was to host a playoff game, so we feel that we’ve earned it, deserved it,” he said. “It’s not going to change our mindset, but the players will feel more comfortable playing in front of their fans, friends and family.”

The senior leadership has also been a constant source of inspiration throughout the season. Senior captain and All-American forward Joanna Kitlinski said she is confident going into Saturday’s game.

“We’ve been working really well on defense and focusing on not letting up,” she said. “We’re playing really well as a team and need to focus on not being nervous.”

A victory over Wisconsin-Milwaukee would most likely see GVSU facing Northern Iowa University, who took the Lakers out of the 2008 playoffs with a double-overtime win en route to winning a National Championship.

A successful mix of talented seniors and highly-touted new recruits has made this year’s team special, Richthammer said.

“Some players came back this year solely to compete for a National Championship,” he said.