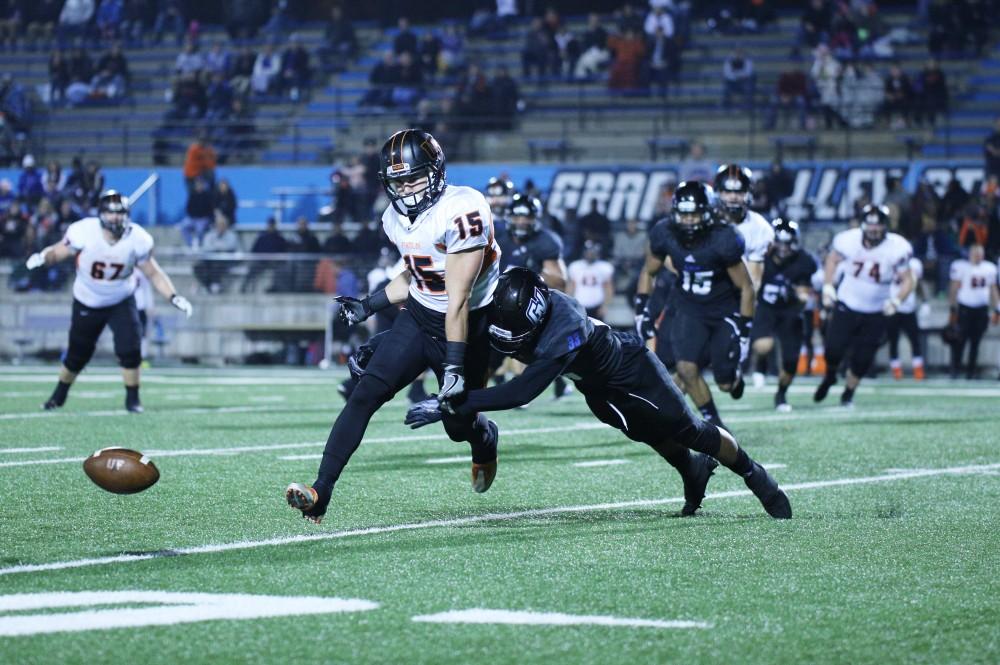 During Grand Valley State football team’s Spring Classic game at Lubbers Stadium Saturday, April 15, the Laker coaching staff made it a point to challenge its younger talent to see if the players had improved their “growth mindset” and approach to the game.

One player who proved himself to head coach Matt Mitchell was defensive back Kalen Dunham, who was claimed by Mitchell as the best corner out of the spring practice.

Standing at 6 feet 2 inches tall, a height well above average for most cornerbacks, the redshirt sophomore is known for his skill at sticking against receivers with quick footwork and height that towers over them. Mitchell said Dunham’s performance in the spring practice gave promise to the rest of the returning defense.

“We saw a increased level of confidence in (Dunham),” Mitchell said. “He has a lot of physical tools at corner, and it doesn’t hurt that (he is) extremely tall. When you have long corners with length that can help disrupt the delivery of receivers, it gives the rest of defense confidence.”

After being recruited and committed to join the Lakers, Dunham was redshirted during the 2015 season.

But the 2016 season was a different story as Dunham found himself major playing time, contributing in all 13 of the Laker football games. Dunham finished the season with 35 tackles (20 solo, 15 assisted), one interception and one fumble return for a touchdown.

Hearing Mitchell’s words of praise—and also criticism—has Dunham even more excited to step on the field and defend the secondary with his fellow defensive backs this upcoming season.

“Hearing those words from the boss gives me even more confidence to go out on the field and perform at a high level,” Dunham said. “But I still have things to work on and continue to grow upon.”

One of Dunham’s major criticisms from the coaching staff revolves around his overall discipline, something Dunham agrees he has to keep working on.

“I know now what I need to make my biggest improvement at now, and it’s made me understand what my role is and how it has grown,” Dunham said. “Because of that, it’s allowed me to focus on continuing to gain weight and get stronger.”

One player that has noticed the growth and raw talent of Dunham is senior defensive back Tre Walton, who said Dunham made an immediate impression on him and the rest of the Laker secondary upon arrival.

“We knew he was good since he came on the field day one,” Walton said. “He’s a tall corner that can defend at all routes, and it doesn’t hurt that he’s very dedicated in the film room.

“Grand Valley should be very excited that he’s going to be on the field for the next three years.”

Walton and the rest of the GVSU defensive back squad have also made it easier for Dunham to be comfortable on the field and off the field with his teammates.

“I have a lot of fun with the guys in the defensive back group,” Dunham said. “We have a lot of talent that haven’t even played a single down yet, and our returning players are so hungry that it makes for a lot of competition in our secondary. Everybody brings a different skill set to the table, but there’s always improvements that need to be made so we hold each other accountable.”

But besides all the praise surrounding Dunham this offseason, Dunham is looking forward to witnessing his team prove itself as not only one of the best teams in the GLIAC, but one of the best programs in the country.

“We are all brought into working toward championship football,” Dunham said. “It’s going to be crazy at Lubbers Stadium this season.”

Dunham and the rest of the GVSU football team start their season at Indianapolis Saturday, Aug. 31.