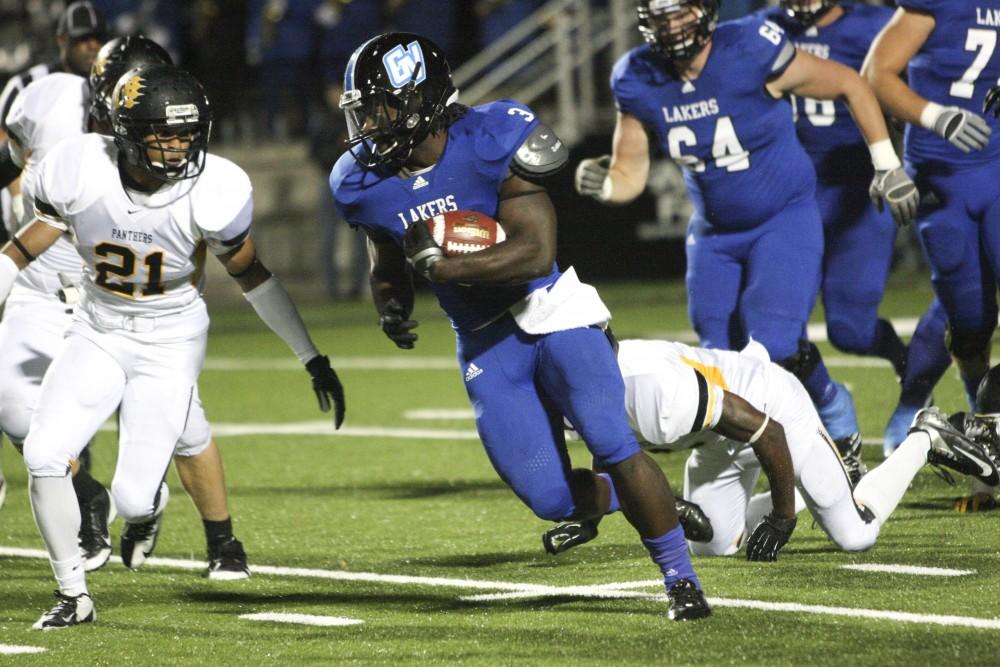 As the rain thickened during Saturday’s game, so did the tension between Grand Valley State University and Ohio Dominican University. The Lakers led 40-20 as the fourth quarter began, but over the course of 13 minutes, that 20-point lead slipped away — tacklers missed and the offense stagnated as the visiting Panthers rallied to take a 41-40 lead with 6:07 remaining.

For all the struggles in the fourth quarter, it was a pair of sophomores that saved the Lakers late. Quarterback Isiah Grimes connected with receiver Darryl Pitts for a 25-yard score with 1:16 left to give GVSU (4-0, 3-0 GLIAC) a 46-41 victory over Ohio Dominican (2-2, 1-2 GLIAC).

“We were fortunate to win that game,” said GVSU head coach Matt Mitchell. “Our kids have some resiliency … we were faced with a lot of adversity and we stuck together, that’s what this team’s about — we stick together. They have a lot of faith in each other and kept grinding and ended up pulling it out.”

Resiliency was something the Lakers showed plenty of in that fourth quarter. Junior safety Dana Dixon intercepted Ohio Dominican quarterback Mark Miller to end the Panthers final push. Grimes touchdown to Pitts — one that came on third-and-20 after Grimes fumbled the previous snap — came in the pouring rain.
Mitchell said it best, it didn’t come pretty.

“The previous play, I dropped back and threw a go, got hit pretty hard. I knew they called it again, rain was pouring down, and I knew we were throwing it to Pitts and he’s one of our best go-ball catchers,” said Grimes, who went 14-for-30 with 316 yards and three touchdowns. “I had confidence in him. I just knew we had to come out and throw the ball … we just did everything we could within ourselves and we just made a play when we needed to.”

Grimes and the offense had their moments, both good and bad. Senior receiver Charles Johnson grabbed eight receptions for 136 yards, including a 43-yard score to put the Lakers up 21 points in the third quarter. He also dropped a long pass late in the fourth quarter that could have sealed the games for GVSU, a play he acknowledged after the game.

The story was the sophomore Pitts, a player who came up with two big catches in his first extensive action of his career.
“I just like the confidence that Isiah had in me and the coaching staff,” Pitts said of the last play. “The play is actually go, to me, so I just knew the whole Grand Valley team was on my back, so I just made a play when my number was called.”

The defense had a similar, inconsistent effort. After holding Ohio Dominican to just 13 first-half points, they collapsed in the second. After holding the Panthers to just 16 passing yards in the first half, the visitors leaned on their running game, and a true-freshman answered.

Tailback Brandon Schoen, the team’s fourth-string back last week, rumbled through the GVSU defense to the tune of 298 yards and a touchdown; a school record. Ohio Dominican’s 395 rushing yards was also the most ever allowed by a GVSU defense — one that has allowed a 100-yard rusher in every game this season.

“Story of the second half was third downs and our inability to sometimes get off the field on third downs,” Mitchell said. “This team had some adversity heading into this game, and we had some adversity throughout the course of this game … I thought the kids hung in there and fought, even when things didn’t necessarily look great.”

The win kept GVSU atop the GLIAC North standings, but also saw them lose a number of players to injury. Sophomore tailbacks Chris Robinson and Mike Ratay, sophomore defensive end Matt Judon, senior defensive end Ryan Pettis and junior linebacker Sam Power all left the game with injuries. Word on the severity of the injuries is unknown at this time.

Banged up or not, the Lakers will return to practice this week in preparation of this week’s road trip to take on undefeated Michigan Technological University.