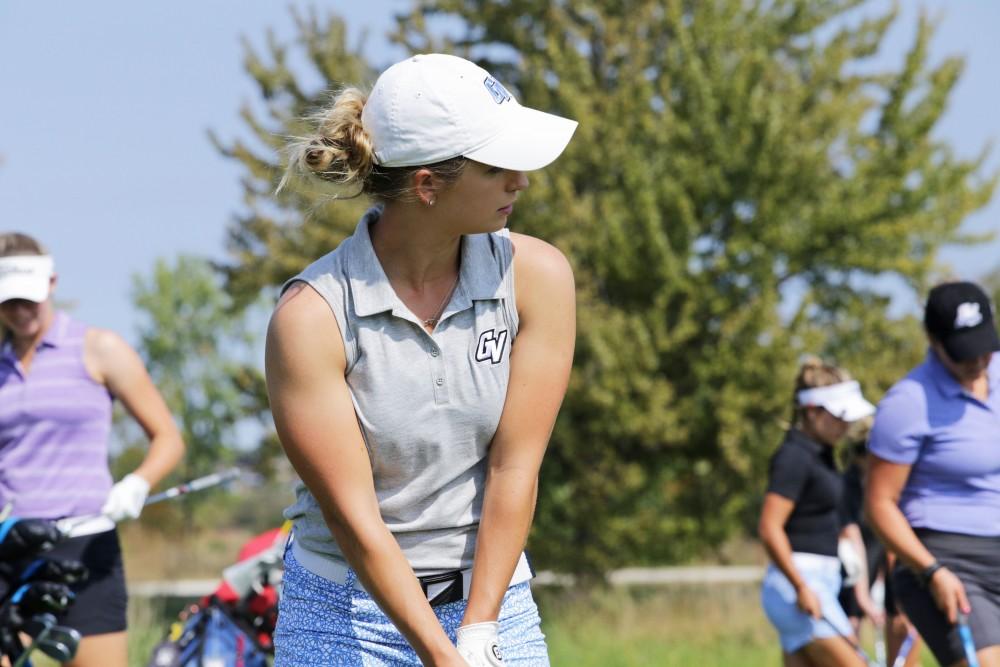 Entering the first day of competition, the Lakers emphasized enhancing their mental toughness to push them to dominate on the golf course. The mindset drove the Lakers to end round one in first place with a score of 299 (+11).

Even though GVSU dominated the competition in round one, the Lakers entered day two intent on keeping that same mindset of focus, shooting a total score of 591 (+15).

GVSU sophomore Katie Chipman showed her strengths on the team, leading the Lakers in both rounds. Chipman shot a 71 on day one, only to advance on day two, shooting a tournament-low 69. The two-day total of 140 gave Chipman a seven-stroke lead from the second-place finisher.

Chipman is pleased with how the Lakers are focused on this year’s season while not letting previous wins dictate the outcome of this year’s competitions.

“I liked our preparations before this tournament,” Chipman said. “Yeah, we could have thought about ‘oh, we won this last year’ and ‘yeah, pretty good completion that we beat last year,’ but we prepared for the home tournament and our home course, like our practice rounders went out and played the holes like we thought they would.

“We didn’t really think about scores or what happened last year.”

Senior Samantha Moss tied for eighth place after shooting a 76 on the first day and continued on to shoot a 72 on day two that moved her to third place. Freshman Olivia Reed earned a sixth-place finish after shooting rounds of 73 and 78 for a two-day total of 151 (+7). Mackenzie Blomberg and and Maria Sol Pose were the last two Lakers to conclude in the winning score. Blomberg took 10th place after shooting a 155 (+11) during the two-day event, followed by Sol Pose, who shot a 156 (+12) for the 11th-place finish.

With five underclassmen, one junior and one senior, GVSU women’s golf has transitioned into a younger team, leaving plenty of room and time for growth. But the Lakers shouldn’t be underestimated, as they were able to keep both team totals under 300 points, an all-time first for the female Lakers.

“This team has a lot of potential,” Moss said. “And it really shows because it was a home tournament. This is our biggest advantage we have, but to show that we actually can put up a good score together is a really big deal because when push comes to shove, we need each other to score well as a team.”

The Lakers’ home-course advantage brought more than just confidence to the team, allowing them to work with new tactics they can take with them for future invites.

This GVSU coaching method allows the coaches to get the point of view of each shooter, giving the advantage to make improvements throughout the entire competition.

“Who we choose to be with on that final day really made a difference, and I think that worked,” Mailloux said.

The Lakers will have a break from competition, as they are scheduled to travel to Old Hickory, Tennessee, for the third annual Trevecca Nazarene Women’s Fall Invite Monday, Oct. 23, through Tuesday, Oct. 24.