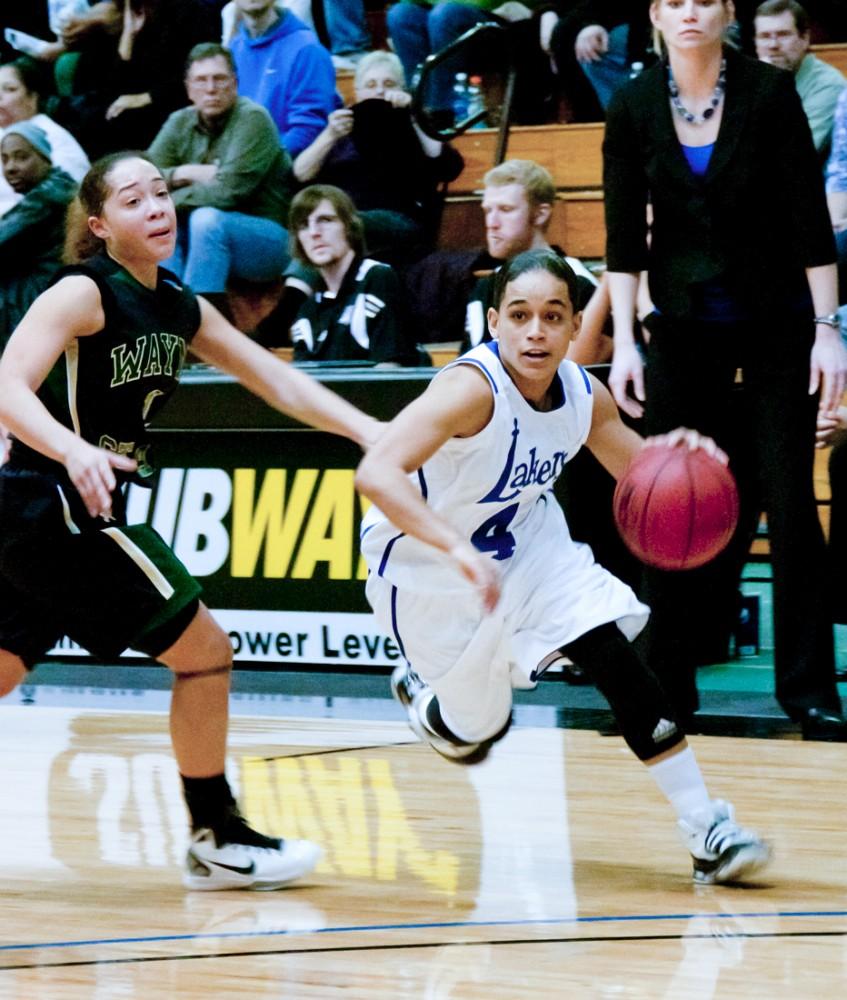 Junior Jasmine Padin moves the ball up the court in the face off between the Lakers and Wayne State. The Lakers one 62-58 in overtime

It was a night that Grand Valley State University senior guard Elizabeth Van Tiflin likely will not soon forget.

Before knowing that she would pull down the biggest offensive rebound of the contest and then ice the game with two crisp free throws to give GVSU a 62-58 win – its 20th of the season – in overtime, it started the same as any other game for “Biz”.

Van Tiflin, the only graduating senior on the 2010-11 Laker women’s basketball team, was honored before Saturday afternoon’s final home contest of the regular season against Wayne State University with a senior night ceremony. But as the night wore on, it seemed like the Lakers (20-5, 13-5 GLIAC) wouldn’t be able to muster a win for their senior captain. GVSU trailed Wayne State by 11, down 41-30 with 7:34 remaining in the second half.

However, something clicked during a late timeout as the Lakers rattled off a 15-5 run in six minutes behind several crucial baskets from junior guard Jasmine Padin, sophomore center Alex Stelfox and sophomore guard Briauna Taylor, who added two old fashioned 3-point plays within the span to ease the deficit to 46-45.

Down 48-45 with 10.2 ticks left on the clock, Padin was fouled while attempting a 3-pointer with 4.4 seconds left on the game clock.

Padin, an 80.5-percent career free throw shooter, coolly knocked all three down to send the Lakers into overtime tied at 48.

“It was a bunch of mixed feelings,” Padin said. “When the foul happened, it was a good thing. We were all excited, and then I was like, ‘oh, snap, I’ve got to hit all three.’ My teammates had confidence in me though and when we were in the huddle they told me, you’ve got this Jaz, one step at a time.”

The beginning of overtime saw Stelfox score five of her career-high 26 points on the afternoon before Van Tiflin drained a 3-point shot with 2:53 remaining to make it 56-50 in favor of the hometown Lakers.

But the Warriors came back and the Lakers found themselves up 60-58 with seven seconds remaining in the overtime period. A foul brought Padin to the line again, but a missed free throw could have been costly if Van Tiflin had not grabbed the rebound. After an immediate foul by Wayne State, the senior captain made both of her free throws to ice the game at 62-58 and give the Lakers their 20th victory of the season, as well as their first home overtime win since 2006.

Despite knowing that it would be her last game on her home court and the varying emotions of the pre-game festivities, down to the wire game and on-court elation after the victory, Van Tiflin tried to keep it cool.

“I didn’t let the emotions get me,” she said. “It’s senior day but it’s also just a game of fun, to celebrate my four years here and my teammates and coaches were encouraging me, saying, this day’s for you, you’ve earned it. It’s just a lot of fun to go out there and play one last time on your home floor.”

The ramifications of the win, which put the Lakers into the 20-win category for the second time during head coach Janel Burgess’ four-year tenure at GVSU, were significant.

“You just look at (Van Tiflin) and she’s such a great kid,” Burgess said. “She’s everything you can ask for in a kid; she’s the hardest worker, she’s a driven kid, she’s the most coachable in the sense that she’s had to play a variety of roles since she’s been here and she’s played them to a tee. She’s the only senior and she’s taken that role extremely well and we’re very proud of her.”

The Lakers issued a 58-41 drumming to the University of Findlay on Thursday night, in which sophomores Stelfox and Briauna Taylor both had double-doubles in points and rebounds. GVSU will close out their regular season with a trip to Big Rapids, Mich., to visit rival Ferris State University on Saturday.