GVSU BASEBALL YEAR IN REVIEW: The Good, The Bad, and The Ugly 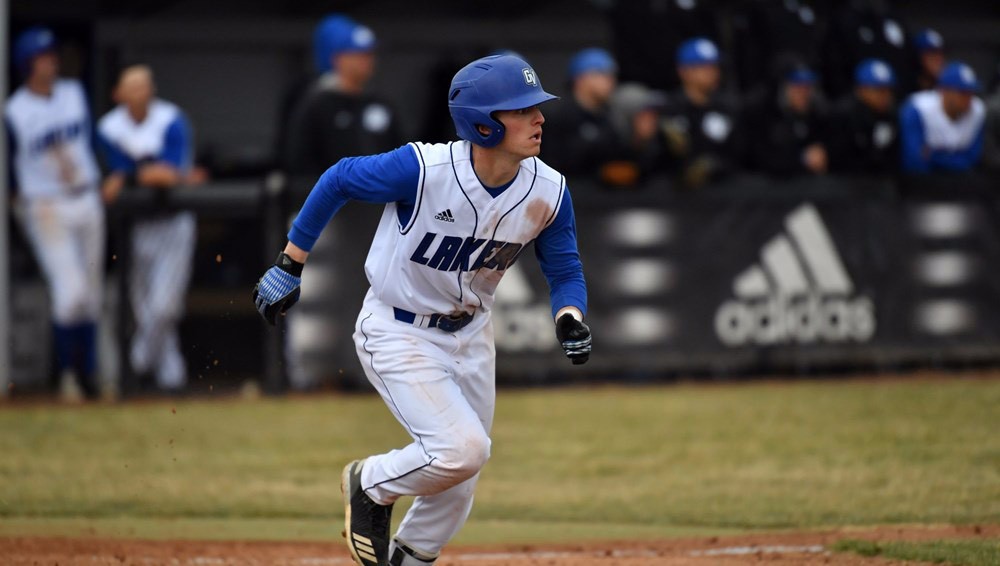 Going into the season, expectations were high for Grand Valley State University’s baseball team to reclaim their magic and make a run toward a GLIAC championship. But instead of improving upon a 28-23 season from a year ago, the Lakers continued to digress, finishing with a 15-27-1 record overall with an 8-17-1 record in the GLIAC, good for second to last in the conference.

“It’s been a tough year, no doubt about it,” said GVSU head baseball coach Jamie Detillion. “There’s been a lot of times where adversity has come up and we just haven’t matched the challenge for it.”

There’s a lot to cover and no one specific reason why this team failed to meet the high expectations of GVSU’s baseball program, so it is worth looking into it in three ways: the good, the bad and the ugly.

“Rylan’s a talented kid, he competes, he’s coachable, he throws strikes, and he’s got three good pitches,” Detillion said of Peets. “He has a very bright future in baseball.”

Peets finished with a 4-3 record on the mound with an ERA of 2.85 and an opponent’s batting average against of .257. Peets led the pitching staff in wins, ERA and walks per nine innings. Peets was also named GLIAC Freshman Pitcher of the Year and his ERA was good for fourth among all GLIAC pitchers.

“If you’re consistent with everything you do every day like your work ethic and paying attention to the little details that you come across then things just come second nature to you,” Peets said. “Doing all that has allowed me to show what I’ve got on the mound and maintain that level of success.”

Laudont finished the year hitting .358 with 8 doubles, 2 triples, 3 home runs and 20 RBI, while Laudont’s .358 batting average was tops among all GLIAC catchers this season.

“Joe’s a hard worker who shows up every day at practice ready to get better and if things don’t go his way he doesn’t let it affect him,” Detillion said of Laudont. “That should allow him to continue on the success he had this season next year. It’s what makes him a great guy and as talented as he is, he’s resilient.”

Carpenter stepped up offensively where GVSU was decimated by injuries, as he hit .285 while tying for the team lead in RBI with 20. Carpenter’s .285 average was a 72 point improvement on his batting average from last season.

Bonter came on strong at the plate late in the season for the Lakers. Bonter finished with a team high .371 batting average while hitting 2 home runs with 16 RBI and a .467 slugging percentage.

Sophomore center fielder Drake Ellens and junior second baseman Anthony Cocco also provided solid contributions throughout the year. Ellens led all outfielders with a .287 batting average and a .989 fielding percentage. Ellens had only 1 error in 39 games played and 37 starts. Cocco hit a respectable .270 while leading GVSU in doubles (12) and tying for the team lead in home runs (3).

The Bad- GVSU had only five players qualify for end of season statistics in the GLIAC due to a rash of injuries. Senior right fielder Jacob Gleason and junior first baseman Ryan Blake-Jones missed a combined 38 games this season.

Gleason and Blake-Jones, who combined for 16 home runs, 101 RBI and both hit over .385 last season, never found their rhythm offensively. Gleason finished the season hitting .225 while Blake-Jones finished the year on the disabled list and hit only .296 in 22 games.

Apart from injuries, GVSU also struggled mightily at the plate. The Lakers finished second-to-last in the GLIAC in hits with 357 and third-to-last in runs scored with 232.

The Ugly- In 18 seasons with GVSU baseball and 7 of those seasons as head coach, this is Detillion’s first time where he finished with a losing record at the end of the year. Before the conclusion of this season, Detillion had a record of 206-114-1 with a 121-60 record in GLIAC play.

The bullpen, which was supposed to be a strength of this roster, struggled with control all year and paid the price for leaving the ball up and missing locations. The lowest ERA among relievers was owned by Brendan Nearing, who posted a 4.50 ERA. The Lakers also only converted 3 saves on the season, all of which were converted by Nearing.

Overall, the Laker’s team ERA was 5.43 in comparison to their opponent’s ERA being 4.83. More so, if you take away the contributions starting pitchers Michael Morelli, Cade Cintorino, and Peets, the Bullpen’s ERA was a run and a half higher than the team average at 6.96.

After Friday, March 8, GVSU baseball was playing .500 baseball with a record of 6-6. Beginning on Saturday, March 9, GVSU would go on to go 2-13-1 over their next 16 games, which all but buried their season right then and there.

Moving Forward- The future is not bleak for this team, at least offensively and from a starting pitching perspective. Laudont, Ellens, Cocco, Blake-Jones and starting shortstop Parker Murdie all return and should provide an improved effort from the top of the lineup. Peets, Cintorino, and Morelli all return to form a formidable three-man rotation for GVSU next season.

The key for this team will be to find consistent pitching from their bullpen, play consistent defense behind their pitcher and drive in runners in scoring position.

“At the end of the day if you aren’t willing to face adversity, or create an excuse, or just not willing to face your problems head on then you’re not going to like the results,” Detillion said. “That’s been the story of our season and we were never able to recover. Hopefully next year we can learn from our mistakes and grow from there.”