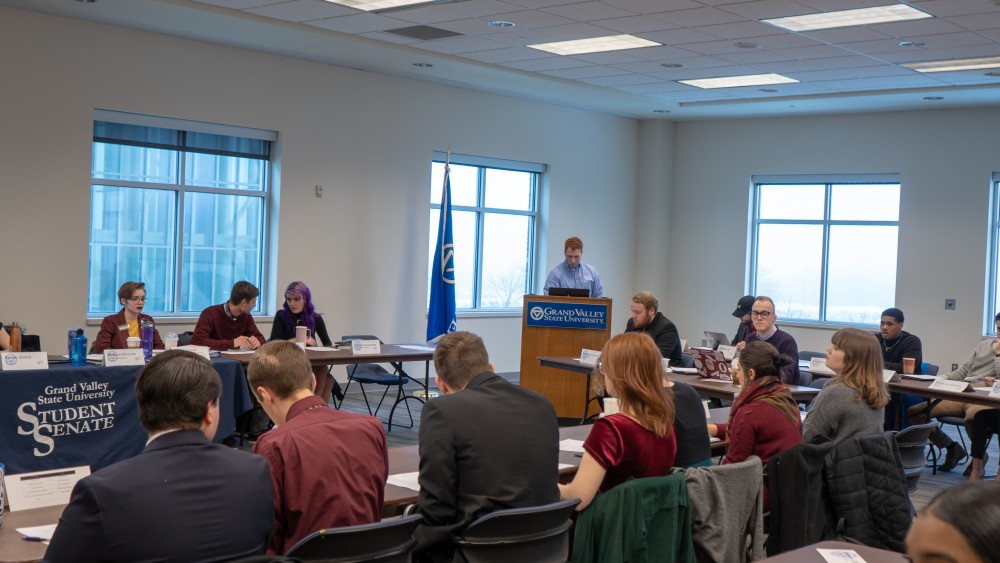 Student Senate. Student Senate Meeting. 4:30 p.m in Kirkhof, Pure Marquette Room. February 7th, 2019. Discussing ways in which to approve the conditions of GV Students in regards to the education system.

From school supplies to construction, Grand Valley State University contracts businesses for its needs. However, Student Senate recently passed W-19-01, a resolution aimed at integrating LGBTQ inclusion into criteria for contracts awarded by the Board of Trustees.

“I knew that these executive directives did not apply to universities, but that doesn’t mean we can’t do that ourselves,” said Student Senate president Eric-John Szczepaniak.

In sponsoring W-19-01, Szczepaniak acknowledged other people face discrimination. Nonetheless, the LGBTQ community is particularly vulnerable since the implimentation of the Elliott-Larsen Civil Rights Act, which prohibits discrimination in Michigan, does not recognize LGBTQ people as a protected class.

Szczepaniak said it is important to inform students that they can be themselves outside GVSU, but this means ensuring the university avoids funding businesses that refuse to hire or serve graduates due to LGBTQ identity.

“If they get a degree from us and then go on and continually face discrimination, then what is that degree really worth?” Szczepaniak said.

Student Senate adopted W-19-01, asking the Board of Trustees to amend BOT 6.10 to only grant contracts to LGBTQ-nondiscriminatory companies.

Vice President for Inclusion and Equity Jesse M. Bernal clarified such protection already exists within BOT 1.4. In 2008, the Board of Trustees amended it to safeguard gender identity and expression. According to Bernal, sexual orientation had been added to BOT 1.4 long before 2008.

“1.4, which is a nondiscrimination statement, is an overarching policy, so that policy governs and covers all Board of Trustees policies.” Bernal said.

Bernal mentioned all contracted companies sign service agreements; these documents feature a nondiscrimination statement mirrored after Board of Trustees policy, including LGBTQ protection. Furthermore, he mentioned the university looks at a list compiled by the federal government on businesses faced with complaints of discrimination

Some challenges accompany LGBTQ-inclusive policies, where Bernal said the federal database GVSU checks shows no claims of vendor discrimination by sexual orientation and gender identity. Instead, the list accounts for mistreatment over veteran status and other aspects.

In the process, Bernal highlighted a lack of national and state databases on companies discriminating against LGBTQ people. Nonetheless, W-19-01 reflected a relevant issue to vendor contracts.

“The exercise the university underwent, based on the Student Senate resolution, was really looking at those places where we explicitly identify some identities,” Bernal said.

A letter from Bernal to Student Senate on April 24 confirmed revisions to Procurement Services procedures. For example, Section 14 of “GVSU Purchase Order Terms & Conditions” states vendors will not discriminate on “sex/gender (including gender identity and expression), sexual orientation…” These same words appear in section 3.2.5 of “General Terms & Conditions.”

“I think by us doing it, it’s a wakeup call to other universities that have statements of nondiscrimination, but maybe they haven’t thought about making that apply to the vendors they use also,” Szczepaniak said.