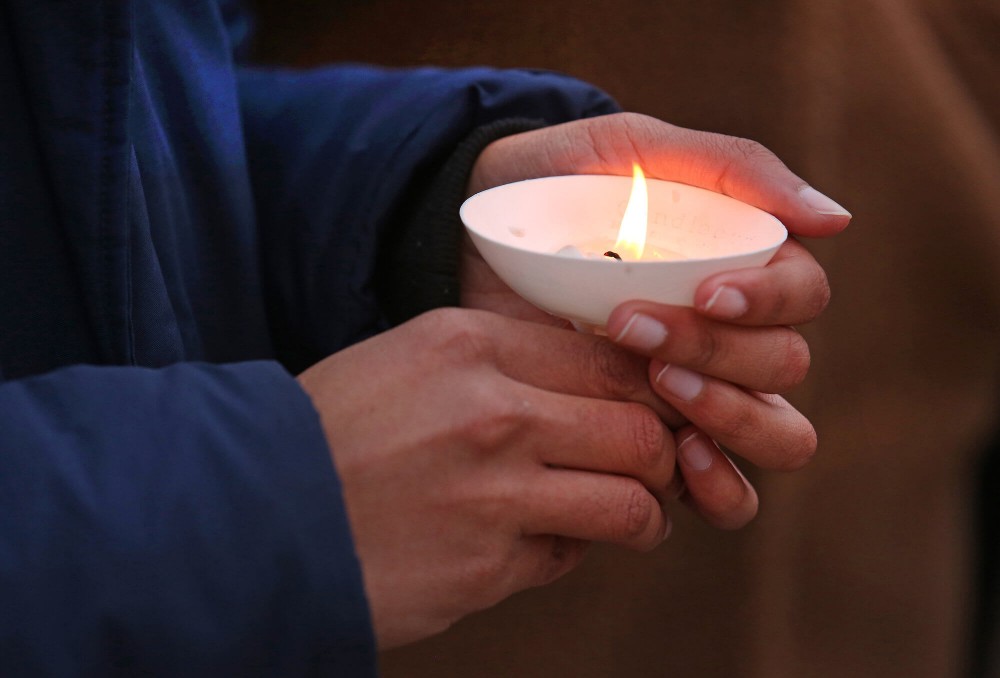 Courtesy / gvsu.edu/gvnow A candlelight vigil was held at the Carillon Tower to remember victims of the New Zealand shootings. Photo Credit: Rex Larsen

Christchurch, New Zealand. A shooter kills 50 Muslims during a time of Friday prayer.

These numbers do not include religious tragedies prior, such as the shooting at a Pittsburgh synagogue in October, 2018, nor more secular attacks such as the swath of concurrent school shootings throughout the country.

This has painted the emotional backdrop students have faced as they finish up their semesters and look to find relief in the summer ahead. At Grand Valley State University, administrators and staff acknowledge these attacks through emails and offers of support, and some students see flames and figures in mourning unite during vigils that support communities.

Campus Interfaith Resources Coordinator Kevin McIntosh said that his department’s first steps following reports of a religious tragedy include connecting with leaders of religious student organizations and offering them campus resources. They work closely with the Dean of Students Office, the Center for Inclusion and Equity and the Counseling Office to suit a wide variety of student needs.

McIntosh said that GVSU’s Campus Interfaith Resources is also one of the few organizations on a public campus to speak out following an attack, which is important in making students feel comfortable at school.

What the university does not do is organize vigils, which is done entirely through student initiative. While McIntosh will help organize speakers and provide candles, among other things, he said that students organize these events with inspiring prowess.

“I think (organizing vigils) shows a lot about the initiative of our GVSU students,” McIntosh said. “It is never easy to both mourn and organize but the students that led these vigils had to do just that.”

GVSU senior Morgan Mattler worked with fellow AEPi brother Ben Friedman and Hillel President Allison Egrin to plan a campus vigil in the wake of the Pittsburgh shooting. Mattler said that a vigil does not bring a community comfort, but can act as a way to strengthen it.

What really played a key role in Mattler’s healing process was the outpouring of support that the university provided him.

“Words of reassurance by peers and administrators are what worked for me,” Mattler said. “I know I was in a lucky position knowing a lot of administrators through Student Senate, but getting personal emails of support from President Haas, Dean Rullman, Bob Stoll and more made a significant impact on me.”

In order to keep communities comfortable, McIntosh said that education is critical. Attending a Campus Interfaith event or reaching out to a peer of another faith creates compassion.

But Mattler said that students — and particularly those in roles of religious leadership on campus — can only do so much to prevent national attacks. Even though he said change needs to come from the government to prevent future attacks, GVSU is providing an array of resources to help students heal from tragies until these changes come.

“As long as administrators continue to be as student-centered as they have been and Campus Interfaith keeps up their great work, I think we’re in great hands,” Mattler said.

With a surefire way to stop future shootings still unapparent, McIntosh said that the university treasures the strength that its student body showcases in the face of adversity.

“There is a recognition that while our beliefs are strong and are different, we see humanity in each other,” McIntosh said. “At GVSU, I’ve been so amazed at the students who volunteered to lead these vigils, knowing that they are mourning at the same time as they bring us together. I think a mixture of sorrow and admiration is a universal feeling.”