T. Haas honored by GV and beyond 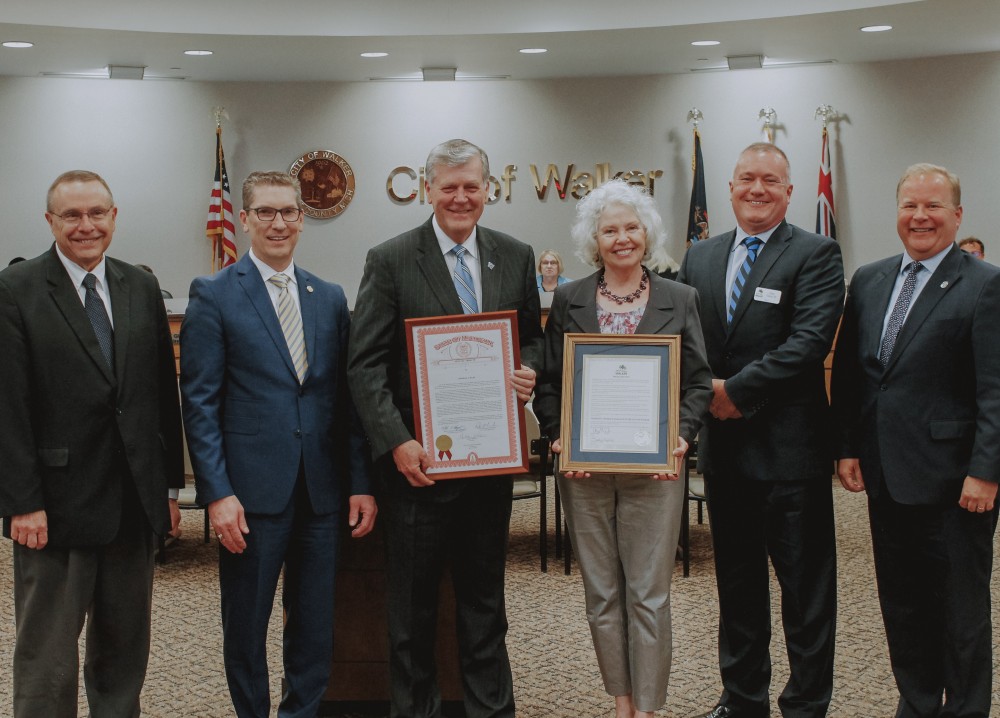 After serving 13 years as president of Grand Valley State University, Thomas Haas will officially retire from the position on June 30. To commemorate Haas for his many years of dedication, organizations both in and out of the GVSU community have held meetings to honor him.

During an April 26 board meeting,  GVSU’s Board of Trustees recognized Haas with a formal resolution and gave him Emeritus Status. Board Chair Mary Kramer noted that Emeritus Status is not automatic and that not every GVSU president has been given the title.

“(Emeritus Status) is an honorary designation and it just shows the esteem and recognizes the person as being someone who is really important to the institution,” Kramer said. “In the case of President Haas, not only did he serve 13 years, but also more than 50,000 of our 118,000 graduates came through and successfully completed their studies while he was president.”

Haas received the Emeritus title for his focus on student success and the connection he has made with students throughout his 13 years of presidency. As GVSU grew, he was still able to connect with students on a personal level.

“To have students feeling like they connect with the guy at the top of the pyramid, I think that’s a very special thing, and I think it’s envied by other institutions and other presidents because it has to be authentic,” Kramer said. “If it were fake or inauthentic, it would not work. But with Tom and his wife Marcia, you feel this genuine connection that they have created with students that I think is very special.”

Kramer also noted Haas’ impact outside of GVSU. His commitment to student success has helped shape the lives of many in the greater Grand Rapids area.

To celebrate his larger impact, City of Walker Mayor Gary Carey named April 22, 2019, Thomas J. Haas Day. After a Walker City Commission meeting, a ceremony was held to honor Haas and the impact he’s had on the community.

“More than half of our city commission has either graduated or attended GVSU and has been impacted by him,” Carey said. “More than a third of our city employees – same thing – have graduated, attended or had a family member do the same.”

While Haas has affected a large population in Walker, he has also had a direct impact on Carey, who is currently in GVSU’s Accelerated Leadership Program. Carey credits Haas for giving him inspiration to finish the degree that he started long ago.

To recognize Haas’ impact on the City of Walker, Carey decided to gift Haas with a proclamation. After inviting President and Marcia Haas to the ceremony, Carey reached out to State Rep. Mark Huizenga and State Sen. Peter MacGregor, both of whom wanted to be a part of the ceremony and celebration.

“(Huizenga and MacGregor) are each big fans and know T. Haas personally and professionally,” Carey said. “They were able to both bring a proclamation from the state legislator back to him in a framed certificate. All of us count T. Haas not only as a partner with our entities, but also as a friend.”

Haas will continue to be an ally and influencer in the greater Grand Rapids community as the incoming Chair of the Economic Club of Grand Rapids for 2019-2020. He will also be back at GVSU as a chemistry professor starting in fall 2019.