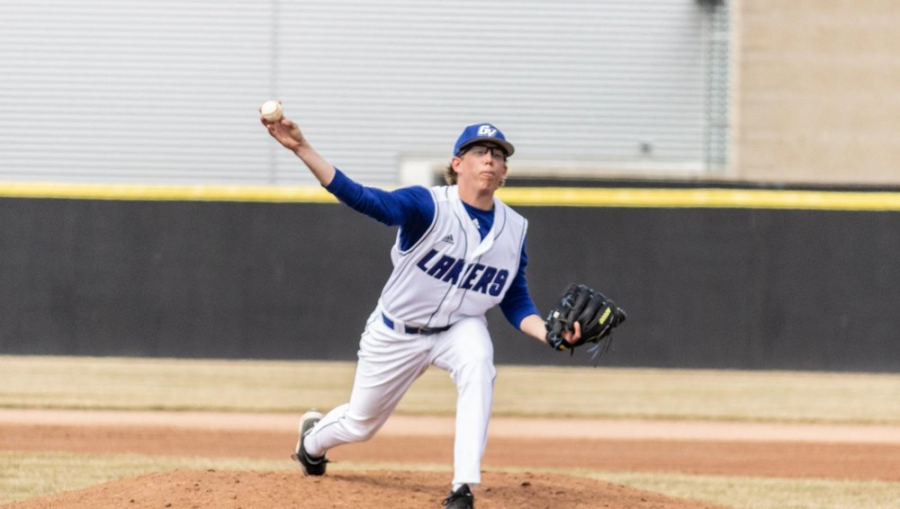 Grand Valley State University freshman right-handed pitcher Rylan Peets got some shocking news from his father the summer before his junior year of high school, which turned out to be a pivotal time in the life of a young Peets.

Rylan was diagnosed with a brain tumor.

“I became really reflective and talked to my dad, and he said that you’re not always going to have the opportunity to be a baseball player, and that I should really go for baseball,” said Peets in a recent interview. “I took it to heart and from then on out during my junior and senior year, I knew deep down I really wanted to give baseball my all.”

Before then, Peets grew up just like any other kid with a family pedigree for athletics. Baseball ran in his family’s bloodline as his father played at Ferris State and his brother, Kyle, currently pitches at Calvin College.

Despite all that, Peets wasn’t always all-in on baseball. In fact, Peets’ first passion was actually bass fishing.

“I was a huge bass fisherman growing up — that’s what I wanted to go to college for originally,” Peets said. “Until my junior year, that was my ultimate goal.”

But after fate landed Peets on the operating table to remove a brain tumor, his aspirations changed, and things started to fall into place for Peets on the diamond as he started to develop his velocity and pitching repertoire on the mound.

“I’ll never forget pre-districts my junior year,” Peets said. “My pitching coach had a (radar) gun on me for the first time ever and he showed me it and it said 87 mph. I was like ‘Holy shit, I never knew I could do that.’”

Once Peets saw that number on the radar gun, he said that was when he knew he had an opportunity to take his game to the next level. Coincidentally, it was also during that same playoff tournament that GVSU head coach Jamie Detillion first noticed Peets, whose high school is about a 25-minute drive away from GVSU’s Allendale campus.

“We first came across Rylan in pre-districts for high schools in the local area about two years ago,” Detillion said. “He flashed the velocity to pitch at the DII level, but what we really liked about him right off the bat was how competitive he was on the mound.”

After wrapping up his junior year, Peets ended up playing a handful of travel ball games at GVSU on top of attending a number of training camps that helped him highlight his competitive nature, which resulted in him gaining an offer to play baseball at GVSU.

“There was a lot to like with Rylan when we saw him in high school,” Detillion said. “The first thing we look for in pitchers is velocity, pretty obviously, which he was throwing high 80s. But on top of that, he had really sound arm mechanics and efficient usage at the high school level, which we also highly prioritize because you never know what kind of program a kid might be in where he could be over used or have poor mechanics that hurt his arm.”

Peets would go on to help lead Spring Lake to a 22-12 record his senior year before arriving at GVSU, where they made the deepest playoff run in his high school’s history, winning districts and making it to a regional final.

“We had a lot more senior leadership and we kind of had that underdog mentality,” Peets said. “It really fueled us.”

When Peets arrived on campus, he said it was that underdog mentality that helped motivate him to improve and perform well out on the diamond during his freshman year once his number was called to pitch.

“Every day, I showed up ready to work on my game and help this team win to the best of my abilities,” Peets said. “I didn’t let any of the negatives into my head and when you work hard and pay attention to all the little details day in and day out, you’ll eventually see the results of your work and that’s essentially what I experienced.”

Peets hopes a similar hardworking mentality can help fuel both him and the Lakers to improve next season. Peets finished the year with a 4-3 record, a 2.85 ERA, and some hardware in being voted GLIAC Freshman Pitcher of the Year.

“Going into this year, I didn’t expect to pitch a lot, let alone be a starter,” Peets said. “When I found out about being voted (GLIAC) freshman pitcher of the year, I was more happy than surprised because I put my everything into this year.”

Although Peets was recognized for his individual success, the Lakers did not have a successful year collectively and closed out the season with a subpar record of 15-27-1, which is the only losing season on record in the university’s online archived statistics that go back to 2003.

“It was a tough year for us,” Detillion said. “There were a lot of times where we had to face some adversity and at the end of the day we just weren’t up for the challenge.”

“You can’t take everything too seriously, baseball is a game of failure so not taking things to heart when they go wrong is a big thing that I’ve noticed over the years,” Peets said. “There are days where you’re going to pitch well and the other team is going to hit you and at that point you have to be like, so what if I fail? I put my best effort out on the field and if that doesn’t always end in a win, I’ll accept it and work hard to better myself moving forward.”

If GVSU can develop that mentality teamwide and grow over the offseason, they could have a pretty well-rounded roster next year.

On top of returning Peets, GVSU also returns starting pitchers Cade Cintorino and Michael Morelli who both posted ERA’s in the 3’s. GVSU also returns six out of their top seven hitters from last year’s squad, including starting catcher Joe Laudont and first baseman Nate Bonter, who hit .358 and .371 respectively.

“I’m thrilled to get back in the swing of things and continue improving and learning from [pitching] coach Sam Riggleman,” Peets said. “From a personal standpoint he’s that dude, a fountain of knowledge, and I’m extremely grateful to have him around. But all the way around I think we have a really bright future so I’m excited for next year.”