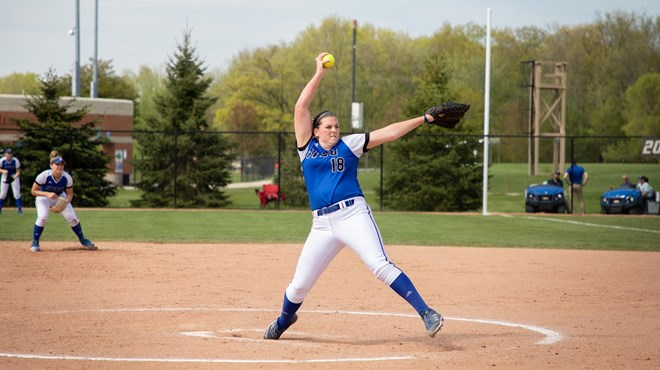 The No. 5 ranked Grand Valley State softball team’s successful season came to an end Saturday, May 25, when they lost in the semifinals of the College World Series to No.4 ranked Texas A&M Kingsville, 3-2.

After losing to Texas A&M Kingsville in the opening round of the tournament, they fought their way through the loser’s bracket, beating No. 1 ranked LIU Post, 2-0, and beating No. 2 ranked West Florida on a walkoff, 3-2, before the second loss to the Javelinas ultimately ended their season after a fun experience at the College World Series

“It’s always a tremendous experience for the players and coaches,” said head coach Dana Callahan. ”Just being able to take away the fact that we competed at that level, the NCAA treats us pretty well as far as the atmosphere, so it’s definitely a worthwhile experience, despite the outcome.”

Freshman infielder Lydia Goble came up clutch in both of those wins, hitting what ended up being the game-winning two-run dinger in the LIU Post before driving home the game and winning in the eighth inning the following day against West Florida with a deep sacrifice fly that allowed senior Shannon Flaherty to come home and secure victory for the Lakers.

“Lydia (Goble) has been consistent all year long, just doing what she needed to do to generate the runs,” Callahan said. “She just went up there with the mindset that she was going to put the bat on the ball and hit the ball hard and they just kept going. Both the home runs she hit were line drives. She did what she intended to do and what she’s been doing all year.”

As is always the case at the end of a season ending in a loss, it was quite bittersweet for the GVSU softball team, as even though they had a lot to be proud of, having to say goodbye to some talented seniors is a hard pill to swallow, as seniors Kaylie Rhynard, Rachel Terwillinger, Flaherty and Allison Lipovsky hung up their cleats after a successful softball tenure.

“Obviously, we had the goal of bringing the big trophy home and you don’t go there with the mindset that you’re going to bounce out early,” Callahan said. “It was a little tough knowing we came short of our goal, but at the same time, they left it all out on the field. We couldn’t have asked for anything more. The seniors were struggling a little bit knowing that it was there last go-around, but the experience they had this year, this was something special and it’s something they’ll never forget.”

This softball team has a lot to be proud of, after earning the regular season title in the GLIAC, winning the GLIAC tournament, winning the Midwest Super Regional, topping the 50-win mark and making a deep run that ended at the College World Series. But with all the team accomplishments, multiple all-american nods and a few all-academic student athletes, the thing coach Callan is most proud is how team-first this softball team truly was.

“This was one of the most selfless teams that we’ve ever been apart of, and I’ve been around softball for (more than) 30 years,” Callahan said. “The team was first in every category — that contributed to a lot of the enjoyment and the culture. Hopefully that’s a foundation that’s going to carry on over the next few years, because these players all know what that feels like. It’s something extremely special and you don’t get it with every team, and I think that contributed to the grit. I don’t know if we were anymore more talented than any of the other teams, but we had a culture that was superior.”