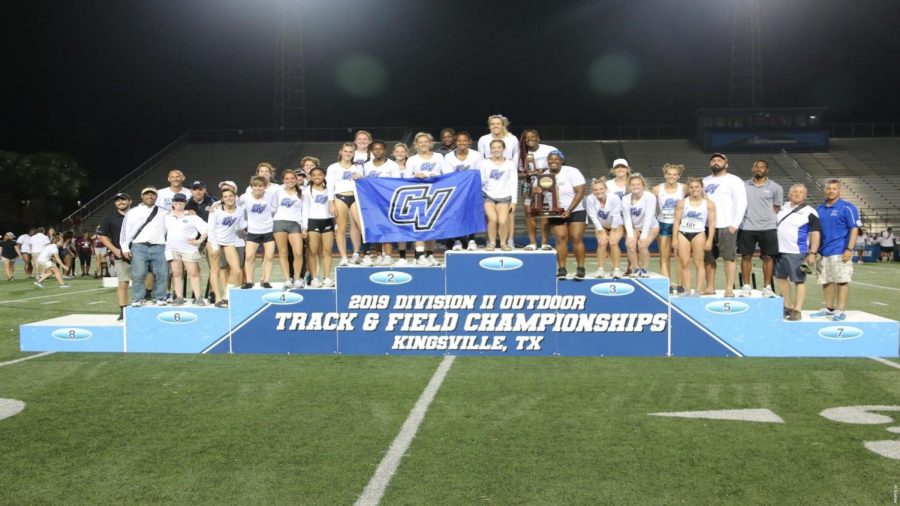 The Grand Valley State University men’s and women’s track and field teams made history to finish their successful seasons, with both teams finishing in the top four at NCAA DII Outdoor National Championship in Kingsville, TX on Saturday, May 25.

“This is probably one of our best seasons for the men and women combined as a program,” said head coach Jerry Baltes. “The past six seasons, both our teams have finished in the top four, and this year we were the only school with both teams in the top four”

“(Panning) dominated both races,” Baltes said. “I sort of wanted him to lay back on the 5K and save some energy for Saturday, but he had other intentions. He was running 25 laps by himself.”

Following the 10,000-meter run, Panning’s time repping Laker nation ended, but he went out with a bang by winning the Co-High Point Athlete of the Meet award with 20 points and the USTFCCCA Outdoor Track Athlete of the Year award.

“For all that Zach has done for our program the past four years, we were happy to see him go out a champion and win those awards,” Baltes said. “Both of those awards are very special and we have never had a male win the athlete of the year award and the high point (award).”

“(Chada’s performance) wasn’t expected, but it didn’t surprise us,” Baltes said. “He ran a really smart and efficient race that put him in great position.”

The women’s team finished third with 47.5 points and had 13 athletes earn 18 All-American honors over the weekend. Rachel Walters had another great day at nationals, collecting the fifth top-3 finish of her career, finishing runner-up in the 800-meter run with a time of 2:08.18 seconds.

“(Walters) is money,” Baltes said. “She had been under the weather the past couple of weeks, and she showed incredible effort and displayed a great way to close to her career.”

Lucy Buckholz also contributed to the Lakers’ bronze medal finish, tying her career best and finishing third in the pole vault with a vault of 3.98 meters.

“Every bar she cleared, we thought that would be a great way to close out her career,” Baltes said. “But she just kept going despite the windy conditions,”

The Lakers sent 35 male and female athletes to the outdoor nationals and returned with 23 All-American awards, despite the weather and added pressure.

“We handled the pressure really well and endured the 90-degree temperatures, high humidity and high winds all meet,” Baltes said. “We haven’t seen that (weather) since last summer and we needed to buckle down and be ready to compete when the time came.”

Although the Lakers didn’t achieve their ultimate goal of an Outdoor National Championship title, they still had an extremely successful season and added to the legacy of their program.

“It was a great season for everyone involved on both the men’s and women’s side,” Baltes said. “We were able to win the GLIAC in all six seasons with cross country and indoor and outdoor (track and field).”

GVSU track and field won’t be back in action until next winter during the indoor season, but the Lakers have already started working on preparation.

“Our goal is to win the GLIAC again next year, ” Baltes said. “We want to make it to the podium every year and bring home some hardware.”