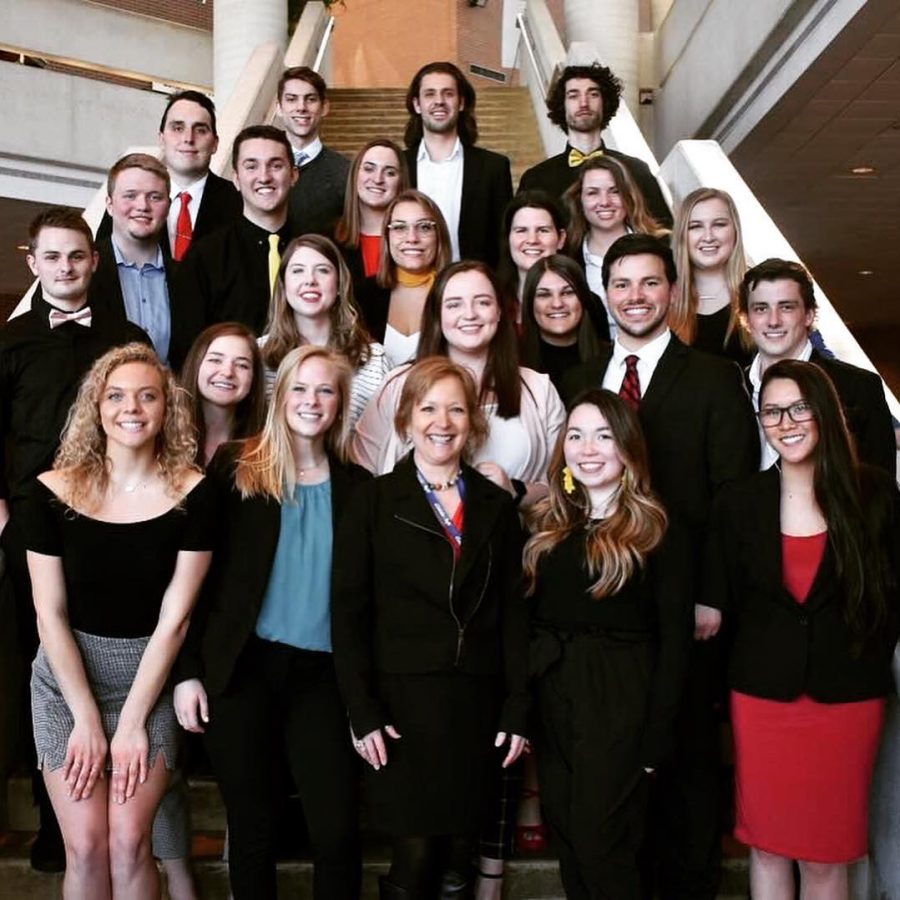 Grand Valley State University’s National Student Advertising Competition (NSAC) team triumphed over its district to claim the top spot in the region, moving forward to claim 15th state at nationals and solidifying an unprecedented win streak for the team. GVSU NSAC has taken first place three times and third place twice in the past five years.

NSAC competitions anonymously pin schools against each other in preparing advertising campaigns, plan books and presentations and their success is judged by industry professionals.

GVSU NSAC adviser Robin Spring said that the team’s performance showcased their grit and prowess throughout the school year, resulting in their string of successes.

“I’m most proud of how this team bonded and pulled each other through a rigorous, exhausting and exhilarating competition,” Spring said. “Not only is the NSAC competition a time to pull all the skills and knowledge they’ve learned throughout their collegiate career, but it’s a particularly special way to develop strong collaborative skills and flex their creativity.”

Spring said that American Advertising Federation (AAF) District 6 is considered a “mega-district” due to the large number of midwestern schools with advertising programs. During district regionals, all teams gather a year’s-worth of work and present their efforts.

“There are a lot a sweaty palms and white knuckles,” Spring said. “Of course, everyone is professional, but we are all filled with angst all day throughout the competition and until the winners are announced at the awards ceremony that evening.  I can’t think of a more anxiety producing situation because we’ve got one shot to present the campaign we’ve worked on so hard for two semesters.”

Surviving District 6 is a feat in and of itself, Spring said. Faced against judges with high, subjective standards and NSAC teams from schools like Michigan State, Ball State and Columbia College, the competition can be intense.

“It’s always intimidating competing at District 6 because the competition is so good,” Spring said. “I mean, this is a serious competition. Everyone is in it to win. I respect the other teams who have performed consistently well because I know how hard it is to earn first place.”

Moving toward nations and facing the top 19 teams from their districts, Spring said that the competition takes another step up. Students have 15 minutes to participate in a question and answer conference call with new professionals regarding their work.

Presenting on a year’s worth of work in 15 minutes is always difficult, but Spring said that if the team improves their semi-final performance, they’ll build upon their already impressive resumes.

“Our team poured their heart and soul into this competition and they killed it,” Spring said. “They impressed everyone. They performed their best and that’s all I could ever ask for. It’s a tough competition.”

With the wind at their backs, the GVSU NSAC team looks toward the 2019-20 season with their sights on trumping the competition in their district once more and climbing the ranks at nationals. With their hard work, they’ll always have at least one die-hard supporter.

“I am so proud of each and everyone of the students that made up the NSAC’19 team,” Spring said. “They all know that I am their biggest fan.”