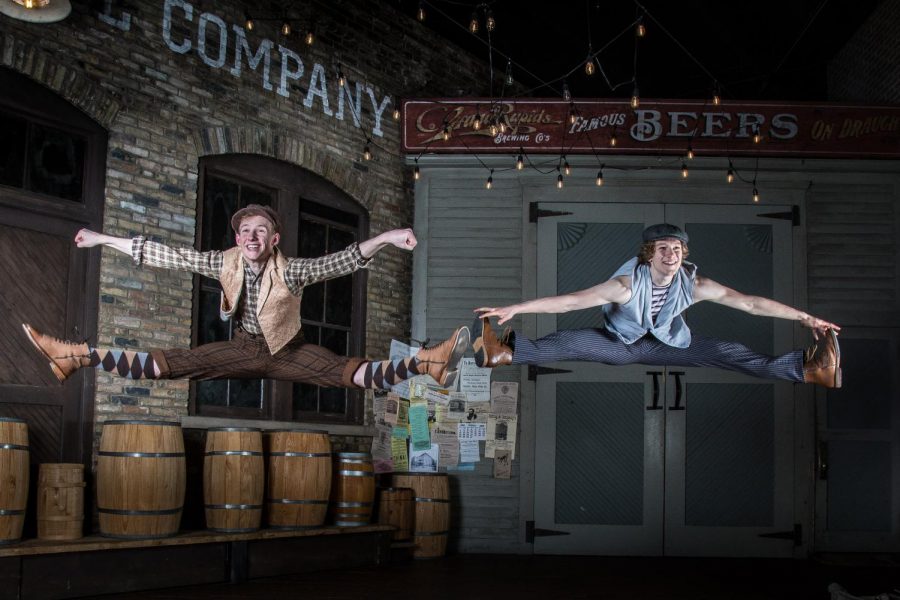 From May 31 through June 23, the Grand Rapids Civic Theatre is presenting the musical “Newsies” to West Michigan audiences.

Based on the 1992 Disney film of the same name, this lively performance follows newsboy Jack during the 1899 newsboys’ strike.

Described by the show’s director, Allyson Paris, as “relevant” and by lead actor Casey Huls as “empowering,” “Newsies” tells the story of young members of society standing up to the injustices instilled by those in power. Though set in the 20th century, Paris said that many of the actors expressed that the themes and sentiments of the show remain true to today’s youth.

Huls, a Grand Valley State University alumni with a degree in music education, said that his favorite song of the musical is “Seize The Day.” He said “this one song carries a piece of everything that makes Newsies such an incredible show.”

“The singing, acting, and dancing all work together so well at this point of the show,” Huls said. “It’s kind of a culmination of everything that has been brought to light in the first act.”

Huls said he is most excited for the audience to see all of the dance routines.

“We have some ridiculous dancers in this cast who do all sorts of incredible leaps, flips, and tumbling tricks,” Huls said.

The show required dancers with such high skill level that it made the casting process a challenge because not only did the performers have to be skilled dancers, but they also had to be able to sing and act.

“We were looking for people who could execute challenging technical choreography with leaps and turns, as well as gymnastic elements and tap dancing,” Paris said.

As with any live performance, the cast and crew encountered some obstacles along the way of bringing the show to life. For Huls specifically, he struggled with finding an authentic way to present the character of Jack.

“As my director, Allyson, put it, ‘he’s sloppy,’” Huls said. “That’s not me. I’m a total perfectionist — I need to have a plan at all times, I need to be organized, and I try my best to always think before speaking. Jack is a disorganized, cocky, fly-by-the-seat-of-your-pants kind of guy who doesn’t bother to look before he leaps.”

“One of the things I absolutely love about acting is that it has the potential to really push you out of your comfort zone, and this show has done just that,” Huls continued. “‘Newsies’ has challenged me in more ways than I can count; it has kicked my perfectionist, organized, planner butt, and has reminded me of the importance of authenticity both on and off the stage.”

Paris, who’s been directing shows for almost 20 years — many of which for the Grand Rapids Civic Theatre — said that experiencing the collaboration between all of the hundreds of cast and crew members has been one of the best parts of making the musical come to life.

“The energy that the young artists bring to this production is contagious,” Paris said. “I always leave rehearsals and performances with my heart pumping and a smile on my face.”

Both Paris and Huls expressed love and recognition to the entire cast and crew and were excited for the audience to feel empowered by their performance. Paris encouraged those interested in experiencing Newsies to purchase tickets through the Grand Rapids Civic Theatre directly to ensure the best price possible.