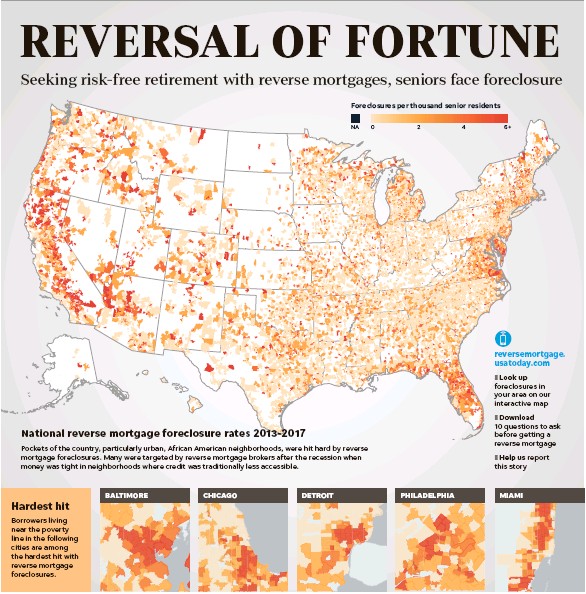 “It was very interesting, and quite honestly, it was painful,” Kelly Lowenstein said. “We ended up finding that there were several hundred zip codes throughout the country which had at least 80 percent African-American people, and they have a very high number of reverse mortgage originations in the last decade.”

The team also found that these predominantly African-American neighborhoods had a higher number of foreclosures relative to other neighborhoods of the same income level with an 80 percent white population.

The complete USA Today article includes heart-wrenching stories of families who are, or have, gone through reverse mortgage foreclosures. Many of the homes taken away have been the familial centerpiece for multiple generations. Kelly Lowenstein added that the home, for many African-American families, is a large part of their financial legacy.

While the problem of reverse mortgage foreclosure is very personal to the families involved, the issue itself also affects the larger population. Each time a home is foreclosed, the value of the neighborhood as a whole goes down.

“As far as the general public, I just hope that (the investigation) leads to a greater awareness of this program and the implications not just for the families, but really for the entire society and the very challenging consequences,” Kelly Lowenstein said. “I hope it sparks some discussion and hopefully some change.”

While the investigation was emotionally strenuous at times, the results proved to Kelly Lowenstein that the efforts were well worth it.

Additionally, he said that one of his favorite parts of the project was working with students. Now-graduated Shirley Keys, Allison Donahue and Jamie Fleury contributed to the project by working on research, backgrounding and fact-checking.

“I really appreciate the opportunity to work with the students and to be in an environment where it’s very encouraged for faculty to work with students together on their projects,” Kelly Lowenstein said. “To me, that is a very positive part of being at Grand Valley.”

The project allowed these students to experience how much effort and work really goes into long-term investigative projects. Donahue said that her work with Kelly Lowenstein shaped her experience with investigative journalism and taught her much more about the field than any class did.

Since its publication, the investigation has been hugely successful. USA Today has a total of 109 newspapers, most of which included the whole investigation or featured an adapted version.

“We had an internal report USA Today did about how many people saw the story,” Kelly Lowenstein said. “There was about seven million people, and they said that people stayed on the site longer than usual. So there was a very wide reach, and that’s one of the things for us that was really exciting about working with USA Today.”

While this portion of the investigation is over, Kelly Lowenstein is not planning on going anywhere. In fact, the team is already getting tips and planning to expand their research. Kelly Lowenstein hopes that this project fuels more of the like at GVSU.