The Story of Gabrielle Shipley: A recap of one of GVSU’s most successful female golfing careers 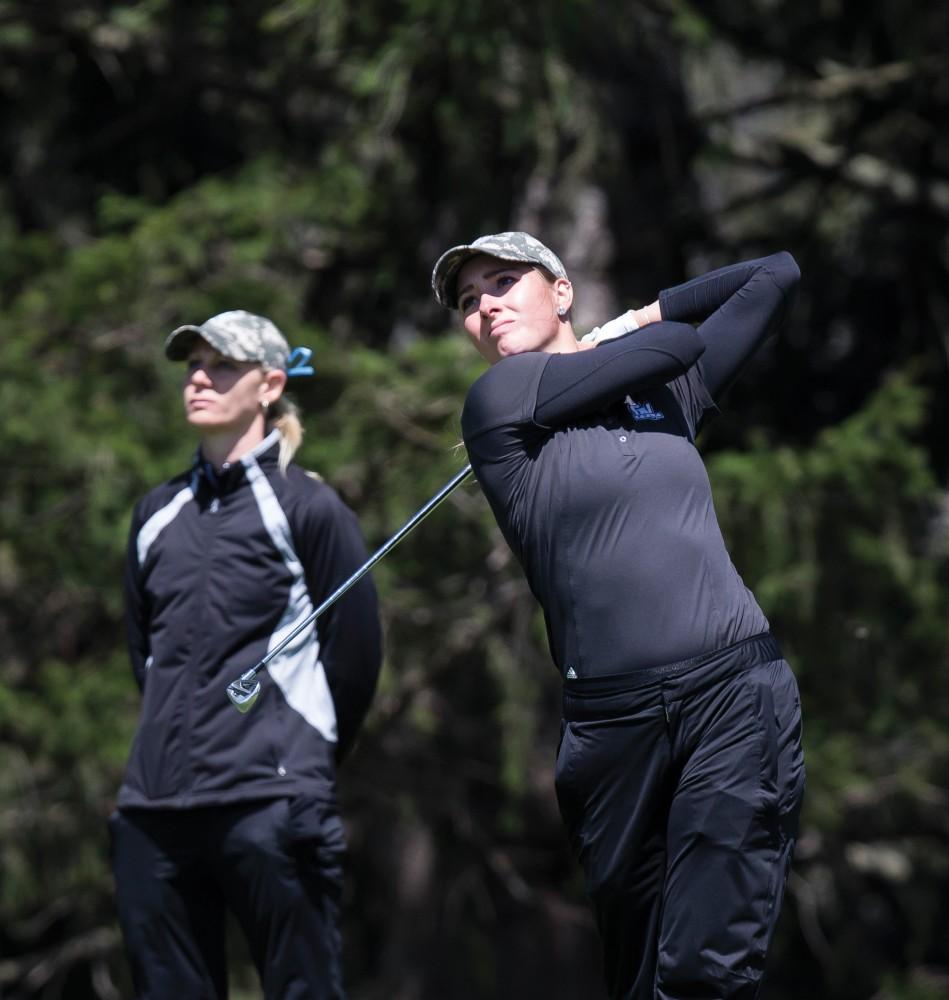 The Story of Gabrielle Shipley: A recap of one of GVSU’s most successful female golfing careers

It all began with her father cutting the shaft of one of his irons in half and covering the end with black electrical tape when she was just six years old.

Gabrielle Shipley, a former individual national champion for the Grand Valley State University Women’s Golf Team, said that was the first time she held a club and the beginning of what has amounted to a rather successful career in the world of golf so far.

Growing up, Shipley said she would go golfing with her father every weekend.

“Early on I would go out every Saturday, Sunday morning with my dad to the golf course,” Shipley said. “We would stop at the gas station and get a milk and a donut then head out on the course to practice or play nine holes; it was nothing too strenuous though.”

Once Shipley and her father wrapped up at the golf course, each time they would also stop back at the same gas station to end the day with a familiar combo; a yellow Gatorade and a Payday.

The tradition continued on until she was ten years old, which marked the beginning of Shipley competing in golf tournaments for the first time.

“I started off competing in a league called the JGA in the Kalamazoo area,” Shipley said. “Those were local tournaments with 9-hole events.”

Shipley would go on to compete in the Meijer Tour, which was a midwestern golf tour based out of Coldwater, Michigan. She then progressed into the Adams Tour as she grew up through her teen years, which is a higher-level golf tour also based in western Michigan.

As Shipley ascended to varsity golf in high school, she started raking in accolades and participating in national high school tournaments.

“Around my junior to senior year in high school, I began competing in the AJGA,” Shipley said. “Those were national-level tournaments that started becoming available to me around the same time that I won an individual state championship my senior year.”

The AJGA, or American Junior Golfing Association, is a “501 non-profit organization dedicated to the overall growth and development of young men and women who aspire to earn college golf scholarships through competitive junior golf,” according to their website at ajga.org.

It was golfing through AJGA events that Shipley was recognized by GVSU and in turn resulted in her being offered a scholarship. Shipley would go on to more than reward GVSU for having faith in her.

After graduating from GVSU in 2016, Shipley played in the US Amateur Open before she took her talents to Q-School in hopes of earning her LPGA Tour Card to continue her playing career professionally.

However far you advance in Q-School determines your golfing status for the next year. For those that don’t advance past stage one, they do not gain much status, or offers to play professionally or on the Symetra Tour, which is the pseudo-minor league of the LPGA. Shipley did not advance out of stage one in 2016 but managed to advance to stage two in 2017 and 2018.

Since May of this year, Shipley has played in professional golf tournaments in Georgia, North Carolina, Alabama, Pennsylvania, Michigan and Indiana.

In her most recent note of success, Shipley was able to come back home to west Michigan to play in a qualifying tournament for the Meijer LPGA Classic, an LPGA Tour event held at the Blythefield Country Club in Grand Rapids from June 11-16.

“I played in the Monday qualifier and it just turned out to be my day and I got my first LPGA Tour start,” Shipley said. “It was amazing.”

Shipley shot a three under par 69 to win the qualifying event and gain an automatic berth into the Meijer LPGA Classic. In qualifying rounds for LPGA Tour events, the top two finishers gain entry into the LPGA Tour event, which was cemented by a put for par after a 30-yard chip shot to the green by Shipley.

“It was an awkward distance on the 18th hole, about 30 yards,” Shipley said. “I knew I had to get up and down and that turned into a six-footer for par and I hit it confidently and it went in. It was definitely a breath of relief.”

It turned out to be a big breath of relief for Shipley, who won the qualifying event by one stroke, over two other golfers who tied for second with scores of two under par 70. Since only two could advance to the LPGA Tour event, the two golfers had to play a sudden death playoff hole.

Even though Shipley finished with a five over par 77 and missed the cut, she still valued the experience.

“I’ve always wanted to start an LPGA Tour event at Blythefield,” Shipley said, who received a sponsor’s exemption for the Manulife LPGA event in 2016. “I grew up there and with the win in the qualifier I was able to do that.”

Up next for Shipley is more Symetra Tour events, where she hopes to make some progress and move up in the rankings for the tour.