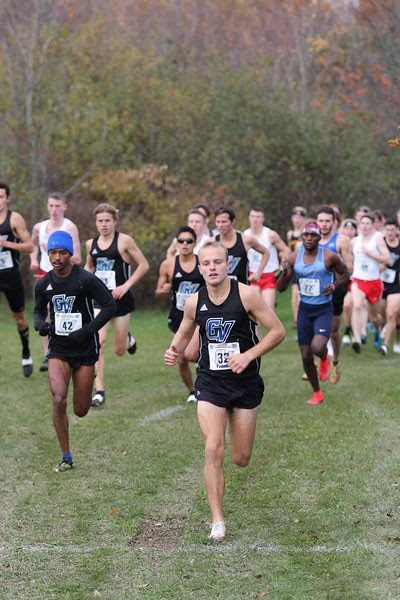 Zach Panning has been winning national titles and rewriting the GVSU cross country and track and field record books for the past five years, but if it wasn’t for one phone call, he wouldn’t have repped the “Laker Blue.”

“I was actually committed to Temple University, and during my senior year of cross country, the head coach called me and told me that the track program was getting cut,” Panning said. “After that, there wasn’t much hesitation, and I kinda knew that was God’s way of saying, ‘You kinda made the wrong choice, so I am going to help you out. You belong in Allendale.’”

Panning started running for the Lakers in the fall of 2015 as a redshirt (RS) freshman and wasted no time making an impact on the program. In his first track and field season, Panning earned U.S. Track & Field and Cross Country Coaches Association (USTFCCCA) All-American honors in the Indoor and Outdoor 5,000m races after third-and eighth-place finishes.

“I wouldn’t be who I am today if it wasn’t for the guys who graduated before me,” Panning said. “I think of people like Allen Peterson, who was here while I was a freshman. I idolized those guys and tried to emulate everything that they did so that I could be the best person and athlete I could be.”

Following his RS freshman year, Panning continued to add more accomplishments to his mantle after earning USTFCCCA All-American honors in both the Indoor and Outdoor 3,000 and 5,000m races. But it was off the track where he truly won gold.

“I met my future wife Justine at Grand Valley,” Panning said. “She’s in the masters accounting program here at GVSU.”

During Panning’s junior and senior seasons, it was apparent he was one of the best to ever run for GVSU. Over those two years, he won a pair of Outdoor National titles in the 5,000m run, another in the 10,000m run, while also being selected as the Men’s USTFCCCA Outdoor Track Athlete of the Year.

In his eyes, none of these accolades hold a candle to the Mike Lynch award he was given by his teammates at the conclusion of his senior year.

“It meant a lot coming from my teammates and it showed me that I was doing something right as a leader,” Panning said.

Throughout the duration of his career, Panning’s teams won a total of 12 GLIAC titles, three Cross Country Regional titles, and one Cross Country National title in 2018. Panning has had great success over the past four years, but the thing he is going to miss most about GVSU is not the awards or trophies, but his teammates.

“I’m going to miss the everyday runs out on the dirt roads with all the guys and talking amongst each other,” Panning said. “I wish I knew then to soak in all these moments. I’ve been here for five years but they have been the fastest three years of my life.”

Although his career may be officially over at GVSU, it still hasn’t quite set in that Panning is an alumni.

“It hasn’t really hit me that I’m done running at Grand Valley, because over the summer I have been training on campus and racing in the Grand Valley uniform,” Panning said. “As of now, it just feels like another summer but I’m sure that will change once I start running somewhere else.”

Going forward, Panning will be weighing his options before deciding on a professional running group to sign with, an achievement that he says wouldn’t have been possible without the support of countless others.

“The athletic training staff has been very helpful and they are there for us every day,” Panning said. “And my assistant coach (Aaron Watson) has been there for me every step of the way and has helped me with my training.”

Panning’s legacy will forever be remembered as one of the best runners in GVSU history, but it can be argued that his biggest impact was felt off the track.