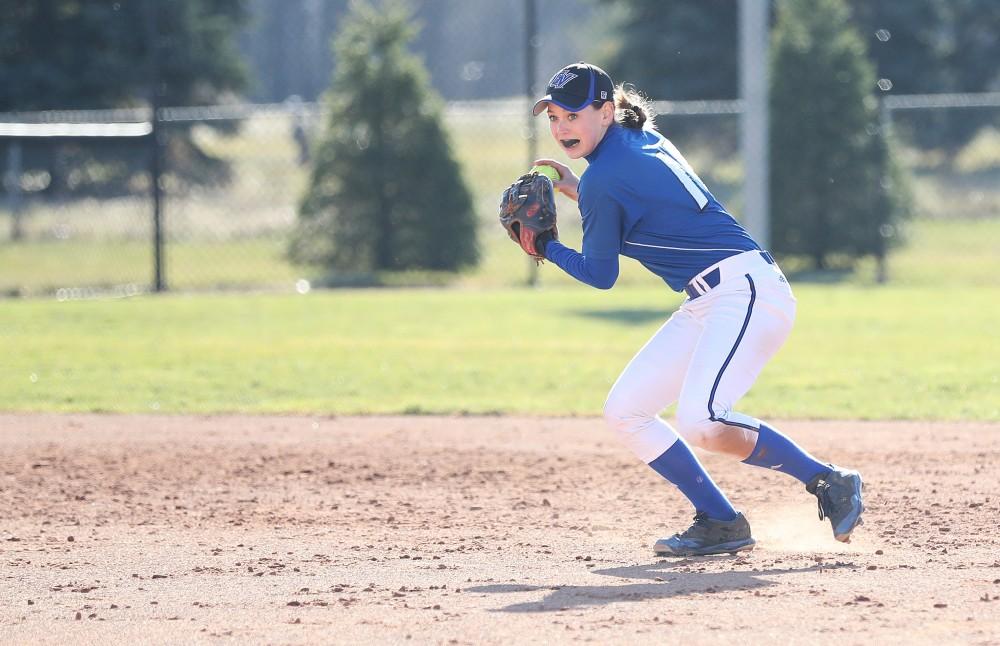 GVL/Kevin Sielaff - Shannon Flaherty (19) throws the ball to first base during the game vs. Lewis on Tuesday, March 28, 2017.

Earlier this summer, the Great Lakes Intercollegiate Athletic Conference (GLIAC) awarded five student athletes from Grand Valley State University with honors in academics this year. This award is presented to athletes that not only have high performance levels on the field, but also in the classroom. One of these five awarded, Shannon Flaherty from the GVSU softball team, earned the GLIAC Commissioner’s Award.

As a senior player this year for the Lakers, Flaherty had a .349 batting average, which was the third highest on the team. She started in all four years of her softball career, tallying up 221 games in total.

Flaherty’s talent on the field never ceased to amaze, as she tied for seventh in school history with 364 assists and also tied for ninth in program history for 14 double plays. Perhaps the most impressive statistic is that she earned her degree in marketing after an impressive final GPA this year of 3.95

“Shannon dedicated herself to both her academics as well as her athletics the moment that she stepped foot on campus,” said head coach Dana Callihan. “Her senior year was her best year and I think that she is very deserving of that award”.

Juggling school, student life and academics is not an easy feat. However, Flaherty managed to have it all. She racked up awards in both her athletic and her academic fields.

During her senior year alone, Flaherty was awarded Google Cloud Academic All-District First Team Honors, All GLIAC First Team and GLIAC All-Academic Excellence Team. Coach Callihan believes that this was all possible due to her dedication to not only her athletic responsibilities but also her academic ones too.

“Dedication is really the key,” Callihan said. “My players know that they are here not only for sports, but for their academics as well. They need to be dedicated to their studies in order to be successful.”

Dedication is not the only thing that matters when it comes to managing time between classes, games, practices, friends and more. According to Callihan, her players also need motivation and communication with the ones around you in order to be successful and not fall behind.

“They really motivate themselves on my team,” Callihan said. “I don’t have to work too hard on them or push them because they push and motivate themselves. It’s really all about time management. One of the biggest things you need to do is go to class. We miss some classes when we travel, but the communication with professors is key to not falling behind, and our players, especially Shannon, are very good at that.”

Flaherty is just one example of how when motivation meets dedication, good things are bound to happen. Flaherty will not be returning next season due to her graduation, however the hard work and determination that is present within the team itself is sure to make a comeback next spring.