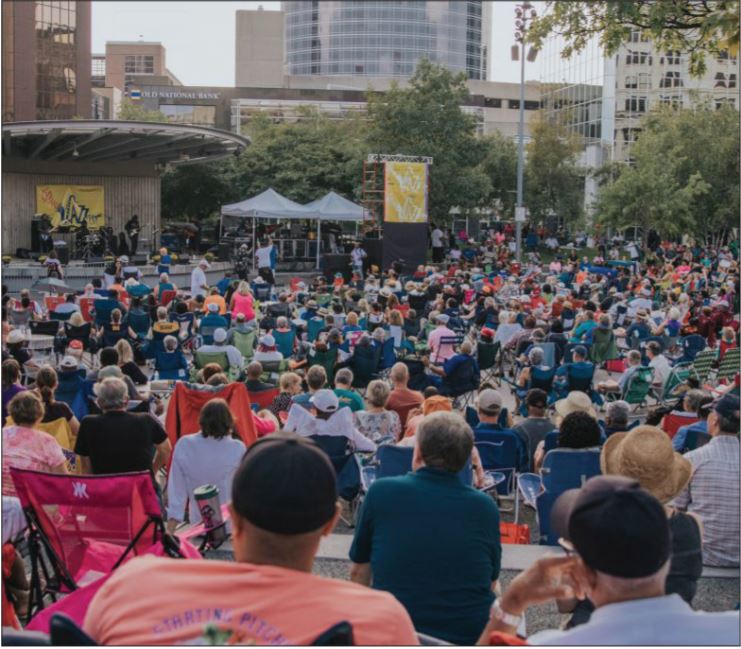 The eighth annual GRandJazzFest took place at Rosa Parks Circle in Grand Rapids this past weekend from August 17th through August 18th. The event brought people of varying backgrounds and lifestyles together in one place to celebrate their love of jazz music.

The GRandJazzFest is West Michigan’s only free jazz music festival. Presented by DTE Energy Foundation, the family-friendly event has become known for featuring both distinguished jazz musicians as well as artists relatively new to the scene.

GRandJazzFest is produced by GR and Jazz, a volunteer-run 501(c)3 non-profit organization. The festival doesn’t have any employees; everyone involved with putting on the festival are volunteers.

GRandJazzFest President Audrey Sundstrom explained that it was her love of both jazz music and the west side of the state that inspired her to create the festival.

“GRandJazzFest came to be because my husband and I often went to jazz festivals on the east side of the state of Michigan,” Sandstorm said. “For multiple years, I queried during our drive home to Grand Rapids as to why Grand Rapids, the second largest city in Michigan, did not have a free jazz festival, especially with having many jazz musicians in West Michigan. My husband responded that if I wanted it to happen, I’d need to take charge and organize it, and others would come forward to help.”

With that, Sundstrom took the challenge and brought Grand Rapids’ very own free jazz festival to life.

Since its humble beginnings as a one-day local festival in 2012, the event has since evolved into a two-day event and has even featured performers from Canada and the UK.

This year, there were quite a few new performers featured in the lineup. These new performers included Tenth World with Kevin Jones & Kelvin Sholar, Paula Atherton, Guitar G-Force with Tim Bowman, NILS and Steve Oliver, and GR All Stars.

Aside from new jazz artists in the lineup, those in attendance were also able to experience some other new features to the festival. DTE brought their DTE Energy Den and a new Family Guitar tent was set up where those present had a chance to win a free raffle for a new guitar throughout the event.

While the GRandJazzFest continues to evolve and expand with each year it’s put on, one thing that hasn’t changed is the overall goal of the event.

“The goal has been to provide a free live jazz festival to all, so that everyone is included, regardless of age, race, socio-economic status, sexual identification and religious affiliation in order to expose people to the diverse genres of Jazz, and to give people an opportunity to interact with other individuals that they may not encounter in their daily lives,” Sundstrom said.