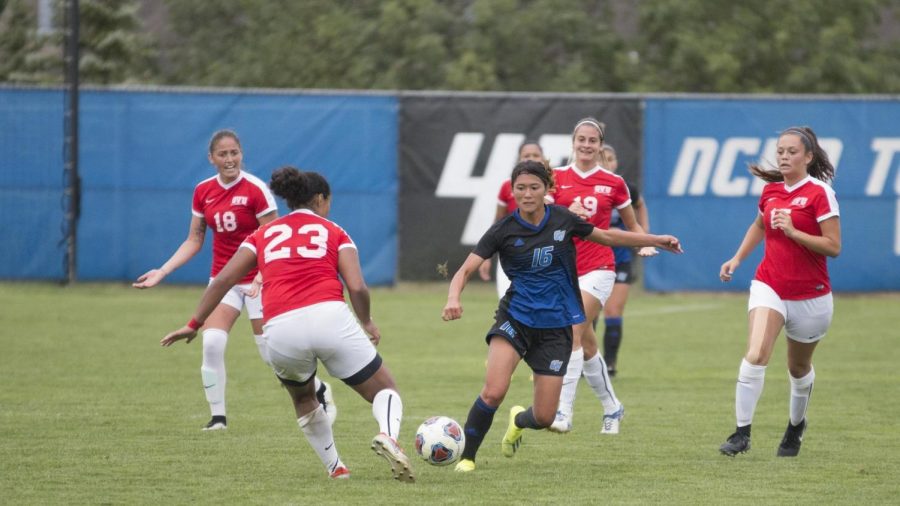 It’s that time of the year again, folks. Students are moving back to college, classes are rolling back up and Grand Valley State University’s athletics are kicking back into gear, quite literally.

Soccer related puns aside, if you are a fan of GVSU soccer, you already know the deal about the women’s team. But let’s say you are new to campus or a casual observer. What’s GVSU Women’s Soccer all about? Let’s break it down.

If a fan of GVSU athletics was asked what the most prestigious athletic program at the university is, you would be hard pressed to find a better answer than the GVSU varsity soccer team. They have just been that good over the past 15 or so years. Over the past 15 seasons, the Lakers have racked up 13 straight conference championships, five national championships, four national runners-up and a record of 317-26-28 dating back to 2004.

Along the way, GVSU has also churned out an impressive list of soccer players. Since 2004, GVSU has produced five D2CCA National Players of the Year, eight Midwest Region Players of the Year, 31 first team D2CCA All-Americans and 55 D2CCA All-Americans overall, including Gabriella Mencotti who also played on the under-20 USA Women’s Olympic Soccer Team.

A year ago, GVSU had a prolific season that fell short in the national title game against Bridgeport University, losing 1-0. The Lakers finished the year one game short of going undefeated, with a record of 25-1-1.

“Last year was a really exciting year for us because we were so young,” said GVSU Head Women’s Soccer Coach Jeff Hosler. “From an outsider’s perspective, we overachieved last year. To lose your first game in the national championship with only four seniors and one junior on your roster after not making it to the final four the year prior is pretty impressive.”

GVSU played at a breakneck pace once again under Hosler, outscoring their opponents on the season 99-9.

“I think from a common observer perspective we play a very exciting brand of soccer,” Hosler said. “We’ve lead the country in scoring five seasons in a row now so we look forward to continuing to utilize a fast-paced style of play.”

When it comes to soccer, there really is not an off-season. In the case of the GVSU Women’s Soccer Team, the traditional NCAA soccer season is only three months long.

Activity doesn’t come to a complete stop once the season ends. Teams still practice and work out on a weekly basis, as well as find scrimmages and tours to play on to continue to improve their game year-round.

“We went out and played five division one schools this spring,” Hosler said. “Those teams included Kansas, Ohio State, Michigan, Dayton and Western Michigan. We really try to find ways in January, February, March, April to grow as individual players so that individual focus can help us as a team later on.”

That also means that recruiting coincides with the constant activity of the team, whether it be during GVSU’s traditional soccer season or any other time during the year.

In DII, there is no dead period for recruiting like there is in DI soccer, so DII soccer teams can recruit year-round.

“The most difficult time for us to recruit is during fall season because that’s also when club season is taking place in Michigan,” Hosler said. “It can get tricky managing time because you are at your busiest with your college team, while club teams are also out there playing a lot of games.”

While recruiting may be getting more difficult as the traditional season approaches, that didn’t stop GVSU from putting together another notable recruiting class.

For this incoming recruiting class, GVSU once again managed to sign a number of talented recruits, especially in the high school sector. Among their recruits, GVSU brings in four All-State soccer players with club experience in Michigan. Cate Brown, Sarah Smolinski and Brooke Russell will be joining GVSU on the back line as defenders and Kennedy Bearden will be on the attack as a forward.

After making an impressive run with a youth-laden roster last season, GVSU was voted as the preseason No. 1 team in the country, according to United Soccer Coaches, and returns three of their four D2CCA All-American selections from a year ago, including unanimous first team selections Riko Sagara (midfielder) and Cecilia Steinwascher (defender), and second team selection Ava Cook (Forward).

According to Hosler, the team is also excited to get midfielder Gianna Parlove and forward Chantel Carranza back in action after both missed last season on medical redshirts.

“Gianna had a really good spring and Chantel was a very promising recruit in the 2018 class who missed a lot of time and couldn’t train with the team last year,” Hosler said. “But if you look up and down this roster you can circle a lot of kids that make a big jump from their first year to their second year, so I look forward to seeing a lot of growth overall from this roster.”

When asked what games you should circle on your calendar, Hosler laughed and remarked that there were plenty that fans would enjoy to see.

“You’re making it easy on me,” Hosler said. “Right off the bat we have Rollins for our opener on September 5th who made the NCAA’s last year, but we also play nine teams that made it to the NCAA tournament in 18 of our regular season games this year so we have a tough slate, the tougher I can remember since I’ve been here.”

So if you are looking to see some quality soccer, the Lakers will open up their season against Rollins Thursday, Sept. 5 and follow that up with another home game showdown with national power in No. 6 Lee University Saturday, Sept. 7.