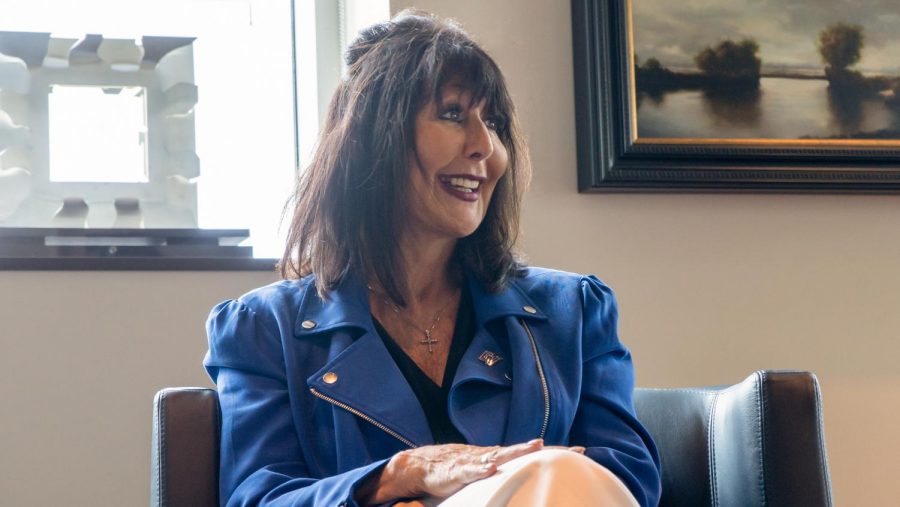 President Philomena Mantella has done it all. She’s spent 30 years in educational administration, supporting lifelong learning and even flaunts a black belt in taekwondo.

Despite her experience, Mantella said the group she relates to most on campus is this year’s incoming freshman class. Just like the new students, she is actively learning about her new home, meeting peers and working to craft her Laker Effect.

“I consider myself a part of the freshman class,” Mantella said. “Every student class puts their mark on the university… It’s just a bit different in terms of their energy, their orientation, their areas of interest, so it will be curious to see what my class is like.”

Since her first official day as president July 1, Mantella said she has spent a lot of her time getting familiar with the university and its culture. Her schedule has included teaching and learning conferences, helping move students into dorms, addressing faculty at an all-staff meeting and speaking at Convocation. She said her goal with exploring campus in this sense is to learn how Grand Valley State University works among itself.

“Grand Valley really is a large and complex organization,” Mantella said. “It’s multi-campus, multi-college, very embedded in not one community, but several communities. So, a lot of my days in the first six weeks has been really getting to know the university and where all of those areas of strength and opportunity are.”

Her first several weeks on campus have included more than just getting familiar with the university, but also establishing some structural changes off the bat. Mantella has already restructured university leadership to include some deans and faculty in directly supporting and advising university vice presidents.

With Mantella still standing in the first 100 days of her presidency, she said she has her sights set on some goals. Using the phrase “Listen. Engage. Act.” she wants to tap into spirits of collaboration and energy to make sure the transition doesn’t slow down GVSU’s growth.

“What happens in a presidential transition in particular because they’re long… is that there’s a lot of energy, a lot of mindfulness around not doing things that are long-view just before the president arrives,” Mantella said. “So I’m also interested in the places where that pent-up energy around “we need to act around these set of things” and trying to make those things come to the surface so everyone isn’t waiting a year for me to know you and you to know me.”

Looking beyond the first 100 days, Mantella wants to focus on local impacts, which she said helps foster global impacts. Because of our privilege to be involved in higher education, she said that GVSU owes it to surrounding communities to be inspiring and promote growth. 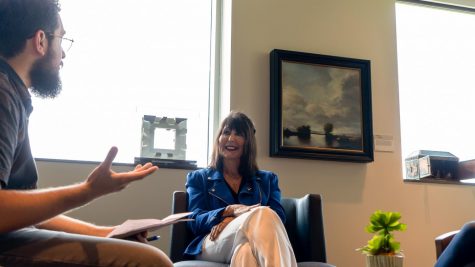 Mantella noted being in her position labels her as a minority, as only about 30 percent of university presidents are female. At GVSU, the president uniquely sits with other women in the university’s leadership, with women as the provost and Board of Trustees chair, and several women holding dean positions.

While innovation will stay on Mantella’s radar, she addressed the fact that GVSU has work to do in increasing its diversity.

“Wherever you are a minority voice, I think there’s more work to be done,” Mantella said. “People don’t necessarily relate to it in the same way because it’s not the norm – the norm is the majority voice.”

Mantella said her leadership experience is unique, with her background including internal and external leadership in both an academic and non-academic setting. With a “checks all of the boxes” mentality, she said “experiential learning” has been a key part of her leadership and meshes well with GVSU’s educational model.

Despite her term being in its infancy, Mantella said she has already embraced what makes GVSU so special.

“When you put the people, the programs, the campuses, the entrepreneurial spirit, the community’s connection to us and our connection to it – that all together, that fabric is so unusual,” Mantella said. “That’s what makes me so excited to be here.”