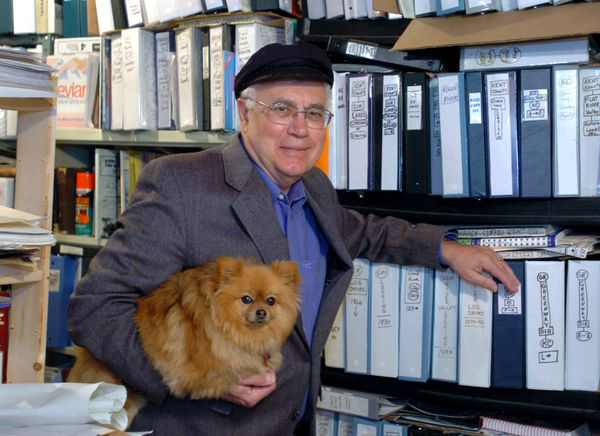 As Grand Valley State University students are working toward their dream jobs, pursuing their passions and becoming educated on topics of interest, GVSU professors have been chasing their own interests for decades. GVSU biology professor Carl Bajema recently released his monumental historical Grand Rapids paper collection to the Grand Rapids Public Library.

Stored in Bajema’s basement were 1,600 volumes of paper archives. His interest in the environmental history of West Michigan drove him to collect and organize newspaper articles across a variety of environmental studies including the lumber industry, rivers, fishing, the Great Lakes, ports, water quality, sawmills and general history. About 400 maps and old business documents from Michigan companies dating back to the 1800s are also a part of the collection.

“If there was an article that mentioned four to five different people (or) topics, he would make four to five copies, and each of those copies went into its own binder relating to that topic,” said Jefferson Seaver, a friend of Bajema’s for over 20 years. “It’s a significant gift on Carl’s part to make this permanently available at the public library so anyone interested in researching these topics has access. (I hope) it will speed along the research of other historians, as well as just by it being available and people seeing the topics and materials, that it will actually inspire people to do other research and write articles and books that they might not have otherwise.”

His paper database collection started in the 1980,s when he sifted through reels of newspaper articles on environmental and historical topics, and also conducted his own research. Seaver said research like this can lead you down rabbit holes, in reference to Bajema’s expansive collection as a result of following one passion. Seaver recalls Bajema hiking through swamps with a GPS in hand, recording the locations where logging railroads had once existed so future generations would know their exact location.

Besides his work as a professor, Bajema had a hand in the installation of the Blendon Landing on the Michigan historical register. The Blendon Landing sits on the south side of Allendale Campus in the ravines, and was once a lumber village in the 1850s and 1860s.

In addition to his volumes of research, Bajema is also the author of “The First Logging Railroads in the Great Lakes Region,” published in 1991 by the Forest and Conservation History magazine, and co-authored a book with Tom Mass titled “The Street Railways of Grand Rapids” in 2017.

Over the last four to five years of Bajema and Seaver’s friendship, their interests have overlapped with local history.

“Certainly, he spent countless hours doing research on his own, as well as collaborating with other historians or researchers over those decades,” Seaver said. “He’s very well known and plugged into the local history circles of people.”

Bajema’s work is now available at the Grand Rapids Public Library, the setting for most of his previous research. Seaver recalls the library staff’s assistance in Bajema’s research to be helpful. The staff has been anticipating the collection’s new home within their walls, as Bajema mentioned his desire to donate his work.

“I don’t think it was entirely possible to grasp the enormity of his collection, until we actually started working with it,” said Head of Grand Rapids History and Special Collections Julie Tabberer. “We are deeply honored that Carl chose the library to donate his collection to. It isn’t easy for anyone to turn over their research, especially when they’ve spent years building and caring for it. Our mission is to collect the history of our community and to make it available for research, and this donation furthers what we do.”

For a look into Bajema’s collection, visit the Grand Rapids Public Library or its website.