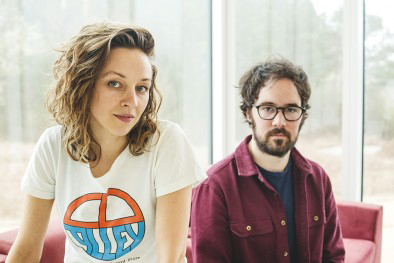 The fast-rising folk band Mandolin Orange will be performing at the Frederik Meijer Gardens Amphitheater at 7 p.m. Wednesday, Sept. 4.

This summer, the Frederik Meijer Gardens Amphitheater has been hosting their annual Fifth Third Bank Summer Concerts series. The series kicked off the season June 6 with musical group Nahko And Medicine For The People. The season will be wrapping up with singer songwriters Calexico and Iron & Wine Sept. 18. The concert series offers viewers a wide range of musical performances.

Mandolin Orange, consisting of singer-songwriter Andrew Marlin and multi instrumentalist Emily Frantz, is a folk band that made their first appearance to the scene almost a decade ago.

With roots in Chapel Hill, North Carolina, the husband and wife duo have created a total of four albums. Their most recent, Tides of a Teardrop, was released earlier this year.

According to an article on the group by WOUB Public Media, Tides of a Teardrop “paints Marlin’s lifelong grief after losing his mother unexpectedly when he was only 18-years-old with aching, quietly spiritual songs.”

With over one million subscribers on Spotify and reviews ranging from RollingStone to the Washington Post, Mandolin Orange’s music has not gone unnoticed.

RollingStone described the music duo as being “engineered to settle worried minds, slow the blood and lend an empathetic ear” with “songs about life lessons that feel lived-in and hard-won.”

The Washington Post spoke highly of the music group for letting their southern background shine through in their acoustics.

“The North Carolina duo’s music — laced with bluegrass, country and folk — is often wistful and contemplative without being somber, and always firmly grounded in the South,” said an article The Washington Post.

The Frederik Meijer Gardens Amphitheater raved about the folk duo on their website.

The aforementioned Frederik Meijer Gardner’s article also credited the intimacy exhibited through the group’s music as the reason for the steady growing fan base. The article also claims that this intimacy is exemplified more than ever in the duo’s most recent album. To see more of Mandolin Orange live performances, they will be touring in the northeast region of the United States in November.

Along with the highly reviewed Mandolin Orange, concert goers will also get to view the musical workings of three-piece band Bonny Light Horseman as their opening act.

Tickets can be purchased through The Frederik Meijer Gardens Amphitheater website. The venue will be selling 1,900 general admission tickets per concert.