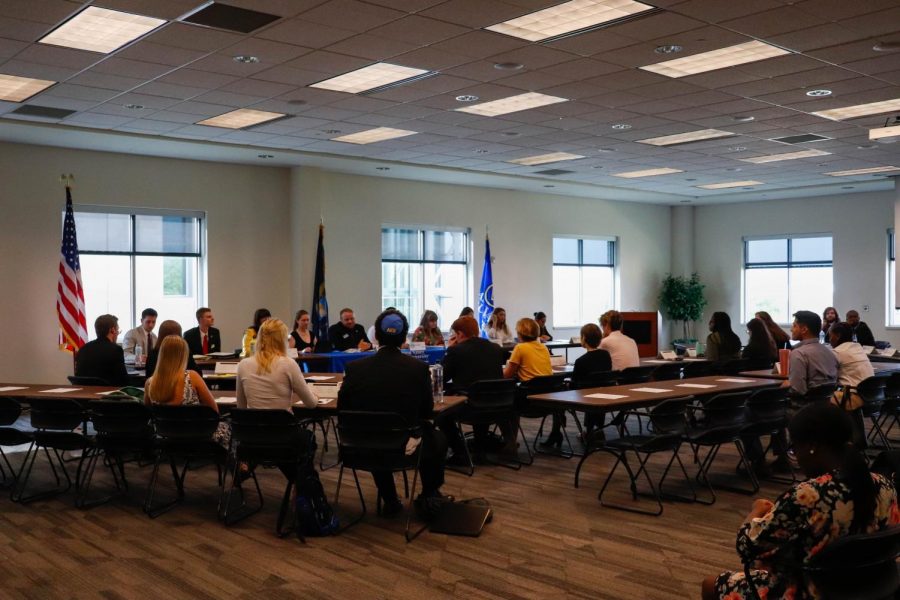 Student Senate formally announced that there would be no immediate, large-scale replacement for the Battle of the Valleys fundraising competition, which was cancelled in March. The senate is planning a smaller, internal fundraising campaign in the interim, with their sights set on a full-fledged replacement coming during the 2020-21 school year.

The annual fundraising competition against Saginaw Valley State University was cancelled last year because of the large time commitment required of a few members. Senate Vice President of Public Relations Ryan Fritz said that a former senator had to drop a class to commit more time to the event’s planning.

During the year-long break from a larger fundraising event, Fritz said the body would be reaching out to students, staff and alumni in crafting a new event. However, Student Senate did not want to go a year without an event, so has been discussing ways to raise some money for a campus-oriented cause in the meantime.

“Among cabinet members, we felt as if it would be important to continue philanthropic efforts throughout the year,” Fritz said. “Through those conversations, we quickly realized that we want something big. We want something beneficial for the students at Grand Valley. With that in mind, we also realized that that would take a great deal of time and planning.”

Fritz said the senate still has many ideas floating on what can be done this year, noting the Oct. 12 rivalry game is just over a month away. He said t-shirt sales – which was done as a part of the Battle of the Valleys fundraising competition last year – were among the possibilities discussed for a temporary fundraiser.

During the Sept. 5 general assembly, Student Senate President Eric-John Szczepaniak said the body would be looking to develop structural planning to better define the role of philanthropy within the senate, which was absent last year. By restructuring senates mission and strategic plan, he said fundraising efforts could extend beyond just a week.

Looking toward the large-scale fundraiser’s replacement, Fritz said that discussions were held over the summer to begin discussions on potential new events. The conclusion that the cabinet reached was that they wanted their replacement to be substantial, but this was not something they wanted to rush. Fritz said he wants all actions to be “intentional” moving forward.

“We are not planning continued efforts with the idea in mind that we must raise the same amount of money, that it must involve a rivalry,” Fritz said. “Our biggest priority is being more intentional with philanthropic efforts and events put on that benefit the community.”

Beneficiaries of a new fundraiser would be on-campus resources, with Fritz naming Replenish, the Counseling Center and a potential textbook fund as possibilities.

Fritz also clarified that Student Senate had not reached out to SVSU’s student government regarding future collaboration. However, the senate clarified that the “Battle of the Valleys” name would be carried on to describe the football rivalry.

“We’re not going to stop,” Fritz said during the body’s Sept. 5 general assembly. “This is a chance for us to take a small step backwards, catch our breath and work on something bigger and better.”