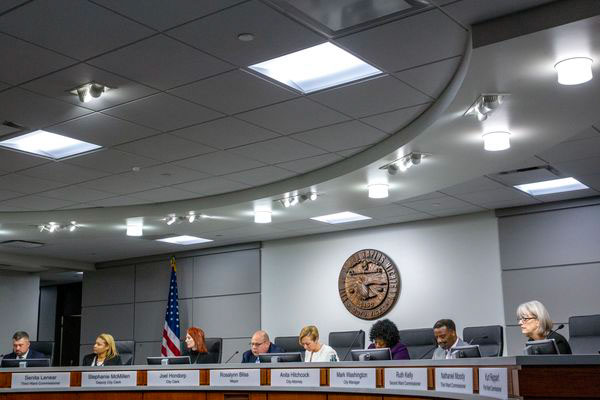 COURTESY / The City of Grand Rapids

At an Aug. 27 meeting, the Grand Rapids City Commission approved a human rights ordinance with additional safeguards for marginalized groups. This ordinance came about from the efforts of LINC UP, a community development organization.

“For us, we believe that neighborhoods matter, that where you come from contributes where you go in life,” said LINC UP Executive Director Jeremy DeRoo.

DeRoo said neighborhoods are not passive spaces because they actively shape people by providing opportunities. He mentioned some neighborhoods do a better job at offering resources than others, so LINC UP believes identifying opportunities for improvement requires listening to residents who face barriers.

In the process, DeRoo mentioned LINC UP heard a myriad of issues faced by locals on a consistent basis. From police incidents to housing, the organization recognized discrimination as a barrier toward advancing community lives. Though most communities have civil rights ordinances with some level of protection, DeRoo recalled an issue with the one in Grand Rapids.

“It was scattered throughout the text, but it was also just absent,” DeRoo said. “There was not clear definitions of all the protected classes.”

DeRoo recalled a LINC UP staff member at the time, Lyonel LaGrone, wrote the proposed ordinance. It went to the City Attorney’s Office for review before arriving at the Community Relations Commission (CRC) as a 30-page draft. Assistant to the City Manager Stacy Stout described the CRC as a liaison that brings community concerns before the city.

The CRC did not work alone on the ordinance, for Stout said the proposal got lots of feedback from the City Commission and a public hearing in April 2019. Most commissioners expressed support for the ordinance. A few were neutral on the matter, commenting on questions toward ordinance’s clarity.

For provisions, the ordinance designates familial status as a protected class. Stout explained how familial status can be a target for discrimination in housing, particularly if someone objects to many children living in one house. She mentioned discrimination can extend into employment, as employers may refuse to hire parents over the notion they will be distracted by their kids.

Another provision defines bias, or a view that compares an individual or group unfavorably to others. Stout said all individuals have bias, but the question is whether people act on their bias. The action behind it matters, Stout said, on whether someone is putting people into harm or obstructing their civil rights.

Stout said one of LINC UP’s concerns dealt with people using police to target different communities for noncriminal activities. She mentioned “Barbecue Betty” and “Permit Patty,” nicknames given to white women who called the police on African Americans over trivial offenses, as two examples. The Washington Post reported the former called police on two black men using charcoal in an area not designated for charcoal grilling, and the latter contacted police over a black girl lacking a permit to sell bottled water.

Aside from defining bias, the ordinance includes a section on biased crime reporting, which prohibits people from reporting crimes based on someone’s membership in a protected class. Beside bias, the ordinance states no one shall retaliate against people who report discrimination. Stout used a hypothetical example to highlight why someone would fear retaliation: If a worker reported being discriminated at a restaurant, that person might risk getting harassed or fired.

For Stout, the ordinance also provides for a systematic referral process. Prior to its passage, the city responded to complaints outside their jurisdiction by advising people to contact outside sources.

Despite such measures, complaints often did not get filed directly. Stout said navigating many systems can be hard on people already stressed enough from discrimination. Therefore, the ordinance emphasizes the Office of Diversity and Inclusion (ODI) will inform complainants when their referrals are received by external investigative agencies. ODI will also keep records of those referrals.

After the ordinance’s approval, Stout explained the CRC’s next step is education. For her, an ordinance is only good when people know about it. Stout said she understands the ordinance is applicable to even Grand Valley State University students within city limits. However, she suggested other learning opportunities for them beyond knowing laws.

“I think they should also have conversations around bias and what it is to be a neighbor,” Stout said.

While Stout is confident about the ordinance in its current form, she acknowledged it as a “living, breathing document.”  The human rights ordinance has been changed before. A Grand Rapids press release mentioned it was updated in 2015 on protections for gender identity. Considering protected classes were added before, Stout said more may be added.

“As we implement and things arise, we are going to keep our eyes and ears open and we’re open to improving it,” Stout said.